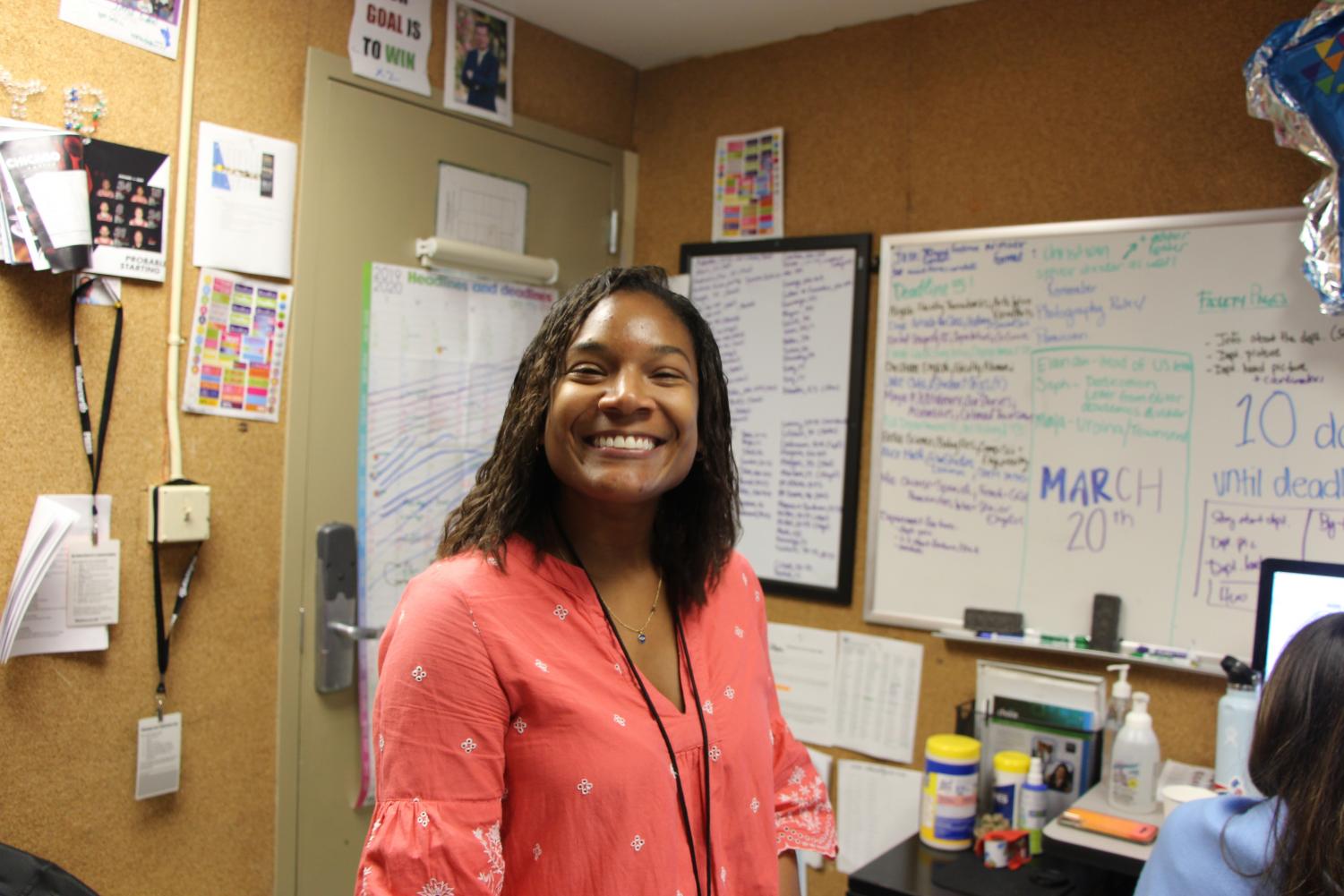 Ms. Danielle Ellis. Say the name to an RE Upper School student who had her in ninth- or tenth-grade English and chances are, you’ll hear two things at the same time. She’s a notoriously hard grader; she’s also a kind and bubbly soul who greets everyone with a smile, and brings a positive excitement towards every piece of literature she presents.

“When I came into her class freshman year and got a D on our first essay, I wasn’t her biggest fan. But she showed me how to improve my writing and I ended up getting an A in the class. And I’m also a much better writer overall now because of her, so I’m thankful for what she did,” explained Becca Fisher ‘20.

What you will hear above all is that Ellis is a teacher who genuinely wants to support her students — one who will be missed greatly when she leaves RE this year to embark on a new life adventure in Michigan. “She’ll come up to me and ask me how my day is. Sometimes, when we talk, she asks me about my writing and reminds me of old assignments that I turned in freshman year, and I have absolutely no memory of these papers. It’s sweet to know she remembers those papers after four years,” said Sarah Steinhour ‘20.

“I could always go to her for advice. Whatever dilemma I had, whether it be academic or personal, she would help me with it. It made me feel really special because she was the first teacher I had a relationship like that with,” added Isa Taranto ‘20.

These stories are not unique. Many RE students have had these kinds of experiences with her because that’s the kind of person she is. And to understand why, you have to understand her background.

Ellis did not grow up in an average household. She was born in Stuttgart, Germany to a military family. After spending the first two years of her life there, she moved to Miami, once again for her family’s military careers. At the end of ninth grade, she moved to Atlanta to live with her mother.

Military families move around a lot, typically every two or three years. Ellis’s parents did not want her to have to go through that, so they sent her to live with her grandparents to allow her to grow roots. This, along with their divorce, caused her to not see her parents very often. Ellis usually only saw each parent one time a year.

Most people would see this as a disadvantage. But Ellis actually attributes much of her personality to this challenge. When asked about her upbringing, she said, “It made me really independent. You know, I just had to figure things out for myself and learn to rely on myself.”

At a young age, her grandmother was sent to live with relatives. But, instead of treating her like family, they treated her more like a servant. “She had to wrap her head with like, a piece of fabric and she put a bucket on her head and she went to the well to get water every day,” recalled Ellis from one of the stories her grandmother told her. Eventually, she advocated for herself to her father, so he sent her to boarding school.

Eventually, she learned to be a banker. In Jamaica, she worked at banks and did very well for herself. Despite this, she eventually emigrated to Miami due to the violence towards lighter skin people going on in post-independence Jamaica. But she stilled faced discrimination after coming to America, living in a time when the Civil Rights movement was just coming around.

Later on, she would give up her career as a banker to become a full-time mom for Ellis. But Ellis believes that the discrimination she faced also played a part in her retirement. “Seeing that, I think, it’s always made me realize that I can’t ever give up on my dreams just because I may go somewhere and I don’t fit it,” said Ellis.

Ellis moved to Atlanta with her mother in her sophomore year of high school. This not only provided her with a new school and opportunities, but also allowed her to develop a relationship with her mother, who was stationed in Georgia at the time.

Ellis went on to graduate high school early, because of all the academic credits she had received in her Miami schooling. Coming out of high school, she wanted to find a way to give back to her country, while also making use of her talents. Ellis was not a warrior, but she was an experienced writer. She planned to give back by being a war correspondent, going overseas to record what she saw and report back her findings.

Ellis intended to be a war correspondent all the way up to her junior year at Georgia State University. While at Georgia State, she worked as the news editor of the Signal, Georgia State’s campus newspaper. Ellis learned skills like managing a team of staffers to write their stories on time at a specific word count, coordinating a team of editors to verify the stories, and designing the sections. This brought Ellis to a new dream: she wanted to be a phenomenal feature writer.

After graduating, Ellis got a job as an intern working for Chata Spikes, a remote reporter who wrote slugs about videos and pictures sent to her by various news agencies. Because Spikes was hired as an independent contractor, Ellis worked unofficially for several different outlets, including CNN and Fox News, and got to experience the biases within each newsroom firsthand. The words that Spikes was writing were the exact words that a broadcast journalist would read from a teleprompter.

“I thought that was so cool, right? You’re writing the news and people on TV are reading what you’re writing,” said Ellis. Everyone from CNN to Fox wanted a piece of Spikes’s work, and Spikes did it all from the comfort of her home desk. She also became one of Ellis’s most formative mentors.

While interning under Spikes, Ellis needed more money. So Ellis took a part time job as a teacher’s assistant for a local elementary school. Here is where she found her love of teaching. She would practice jingle bells, show them how to tie their shoes, and do her best to be an influential presence in their developing years.

When those kids eventually left the school, Ellis was crushed. “And I thought, I have to figure out a way to work with kids all the time,” said Ellis. So Ellis once again changed her dream, and decided to become a full-time teacher.

Ellis worked at the Annunciation Day Schol in Atlanta until one day she moved back to Miami, where she worked for Miami-Dade Public Schools for seven years. Then she found herself at a school called Ransom Everglades, becoming the teacher she is known as today.

Ellis’s military background, the work ethic she honed under Chata Spikes, and the kind heart that she brought to the elementary school classroom have all made her one of the most respected teachers at Ransom Everglades. Her difficult grading comes from a deep desire to help her students achieve excellence — while recognizing, at the same time, that perfection is unattainable.

“When you feel suffocated by just classes and when we had finals or midterms or projects, you’re never going to be perfect,” she said. “That idea of perfection isn’t attainable. Can you achieve excellence? Yes, absolutely. You can be honorable.”

In typical Ms. Ellis fashion, she hasn’t stopped at being a kindhearted and informative teacher. While working at Ransom Everglades, Ellis also completed night school courses in order to get a Masters in Historical Anthropology so that she could use literature as a front door to history. The workload of grading high school papers while also writing a thesis of her own was a daunting task to undertake.

“The Red Bull was absolutely an instrumental player,” she said. “But so [were] my advisory sessions. And I don’t think that advisees understand how important that time is also for their advisor, but it was just so beautiful to watch a group of students connecting with each other.”

As she embarks on an exciting new journey beyond Ransom Everglades — a journey that includes getting married! — Ms. Ellis will undoubtedly be missed by the student body. But she leaves behind a legacy that will serve as a model for students and faculty in the years to come.