Inside the life of Tammy Anthon, RE’s beloved gatekeeper

Behind the smile that would brighten every morning for RE's Upper School community (before quarantine, at least) 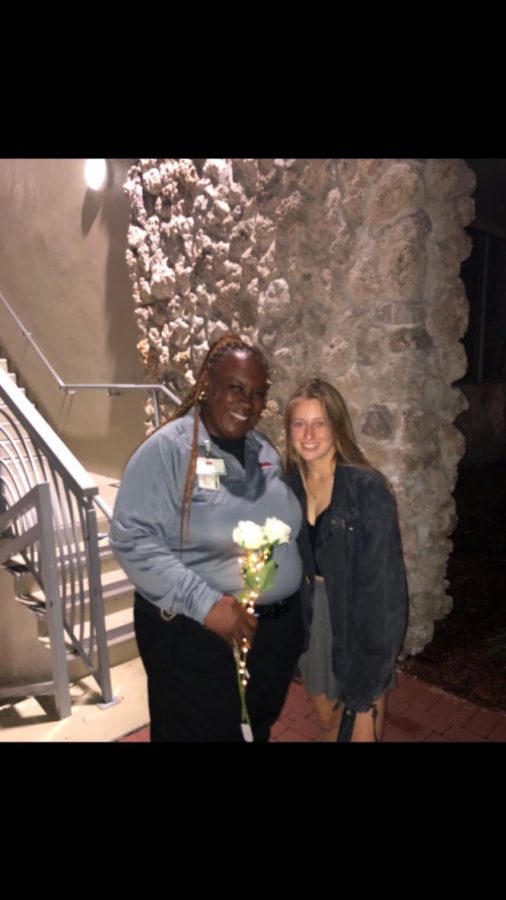 The author surprising Tammy with flowers.

Before the era of social distancing, certain things would happen each and every day between the stone walls that mark the entrance to the Ransom Everglades Upper School. Some people would rush through the gate in a hurry to beat the second bell, others would stroll in leisurely on time, and some would drive in sleepily, blasting their morning tunes in an effort to wake themselves up. Though each person’s entrance might vary depending on the circumstances, most members of the Ransom Everglades community would pause for a couple seconds on their way onto campus to look up, smile, and wave at the school’s beloved gatekeeper, Tammy Valdez Anthon.

A Miami native who attended Miami Central Senior High, Anthon joined Ransom Everglades after Bryant Security Corporation, the company she worked for, relocated her from the Ramada Hotel in Sunny Isles to RE in 2000. Little did she know she would spend the next twenty years of her life at our institution, where she has become a beloved member of the community and a welcome sight to students, faculty, and staff every morning.

Having spent so many years working as the front gate security guard, she has observed drastic changes at Ransom Everglades. When she first started, the school implemented a different sign-out method where it was more difficult to tell who actually signed out and who didn’t. She then witnessed construction of the auditorium. This year, the construction of the STEM Center reduced parking capacity and cut the number of available spots in half. Tammy works in a constantly changing environment. However, her flexible and positive disposition ensures she easily adapts to all the different systems and rules.

Sometimes, she witnesses situations where strange things happen. A few months ago, a random man tried to jump the fence to get on campus. A student saw him and told Anthon, who called the police. He immediately fled. Anthon must keep these people off campus for safety reasons, even though she understands that usually people mean no harm.

“Sometimes, people are just trying to see stuff,” she said.

Her pet peeve is when students try to be sneaky. She hates when people try to sneak in and out in the trunks of cars, try to jump the campus walls, or blame the printer for their lack of a pass. She’s seen it all, and has reprimanded countless students in her efforts to maintain campus safety, which is her top priority. But that has never stopped the massive amount of love for Anthon that flows through the RE community — love that has helped get her through some tough times.

In March of 2018, Anthon suffered a medical accident involving a blood clot in her heart. She almost died. During the time she was in the hospital, students and faculty came together to try and aid her recovery and spirit. Students made glittery cards and raised money. Alumni, faculty, and construction workers visited her at the hospital. Anthon was surrounded by flowers, cookies, and people who love her.

She was touched by the immense amount of support. As I stood in front of the guardhouse interviewing her, Anthon’s glossy, brown eyes seemed to be working hard to prevent tears from escape as she recounted all the kind gestures.

“I mean I knew they loved me, but you don’t really know how much people care until something detrimental happens. I didn’t think they loved me that much,” she said, as a sheepish smile spread across her face.

Anthon maintains relationships with students beyond collecting passes and safeguarding our campus. Sophia Iacovelli ’20 is especially fond of her interactions with Anthon. Iacovelli couldn’t imagine beginning her day without the familiarity of Anthon’s warm smile. She often stops at the guardhouse to chat, catch up, and share stories.

“When I leave campus, she always asks me about my day. She knows all about my family. Tammy is so much more than a security guard, she’s a friend and an advisor” Iacovelli said.

Even students who have already graduated and have embarked on journeys to different places still reminisce upon their fond memories of Anthon. They still remember how her lips slowly formed a big, toothy smile when she saw their cars pull up, how she threw her head back to laugh when they made a joke or wore a funny outfit, and how her long, ornately decorated nails fluttered as she waved to them. The graduating classes bring their memories of her admirable traits to places near and far.

“She would always smile and laugh when I came onto campus with my music too loud,” said Seba Malvezzi ’19.

“She always would set my mornings off to a good start. I wish I had her friendly face to start my mornings in college!” exclaimed Hugo Verea ‘19, who now attends Loyola Marymount University in Los Angeles, California.

Anthon noted that she hasn’t always been so easygoing and nice. At one point, she was known for having an intense, brassy attitude. She has a tattoo on her upper back that depicts a Tasmanian Devil under the cursive phrase “Tantrum Tam” — an old nickname.

“Yeah, I used to be crazy, but then my kids started having kids. I knew I had to start being nicer,” explained Anthon, who has three children — two daughters and a son —  as well as six grandchildren.

But her talents extend beyond her sociability. Anthon often captures Ransom Everglades audiences with her powerful singing voice. She has sung the National Anthem for water polo games and many other sporting events, bringing a smile to everyone’s face.

She also sings off campus. Walk into Saint Mark Missionary Baptist Church on the right day and you’ll see Anthon standing front and center of the church, swaying from side to side and holding the microphone. Listeners eyes’ are fixed on Anthon as her roaring voice fills the air. She moves to the music, and seems unfazed by the crowd of smiling faces or hundreds of snapping fingers. She sings with — and usually leads — two voice groups, the Voices of Glory and Inspirational Voices. The groups practice regularly together, and often perform to support various causes. For example, last October, she performed with “Inspirational Voices” at her church for breast cancer awareness. She chose the song “You Fight On” in honor of women who are struggling with the disease. Among the audience members were Mr. Fontaine, Dr. King, Ms. Beverly, and Mr. Jackson.

In addition to supporting these causes with song, Tammy councils women who have suffered from domestic violence. She meets with them, listens to them, and shares her own story.

Anthon herself is a victim of domestic abuse. For about 10 years, Anthon was subject to both verbal and physical abuse from her partner. He hit her, threatened her, and, she says, tried to rip her away from her family. The scars on her skin remain from the countless instances of physical abuse. One day, he pulled a handgun to Anthon’s head. When he pulled the trigger, no bullet was released from the muzzle.

When she was reminiscing about this difficult part of her past, however, Anthon showed no hint of sorrow. “That’s why I always say I’m a blessing,” she remarked.

She even appeared rather amused while peering out of the corner of her eye to catch a glimpse of the shocked faces of the students around her.

“No one knows. I stand and smile everyday, people just don’t know.” She explained with a grin while shaking her head.

“I think Tammy is a very strong woman. I appreciate how honest she is, and how she always puts the interest of the students first,” Danielson said.

Danielson and Anthon communicate frequently, and share a strong bond. The two connected immediately when Danielson first came for her interview.

“Ms. Danielson was one of the first new faculty members I just clicked with,” Anthon said.

“I don’t know quite what it was. I think Tammy’s also a no-nonsense type of person, and something in me sensed that about her,” said Danielson.

Anthon said that Danielson inspires her, but the feeling is also mutual: Danielson often asks her for new singing videos, and supports her vocal endeavors.

On Sunday, May 17, RE seniors got a rare chance to see Anthon during quarantine as they drove their cars through the gates, one last time, for Senior Send-Off. For many students, it was an emotional experience that showed just how much the pandemic had taken away. As the RE community looks forward to a fall semester that will, many hope, involve being physically on campus, they also look forward to waving to Tammy once again.

Whatever the future holds, Anthon had one piece of advice for RE students.

“Work hard, stay focused, and continue to love Tammy, the best security guard y’all have ever had.”