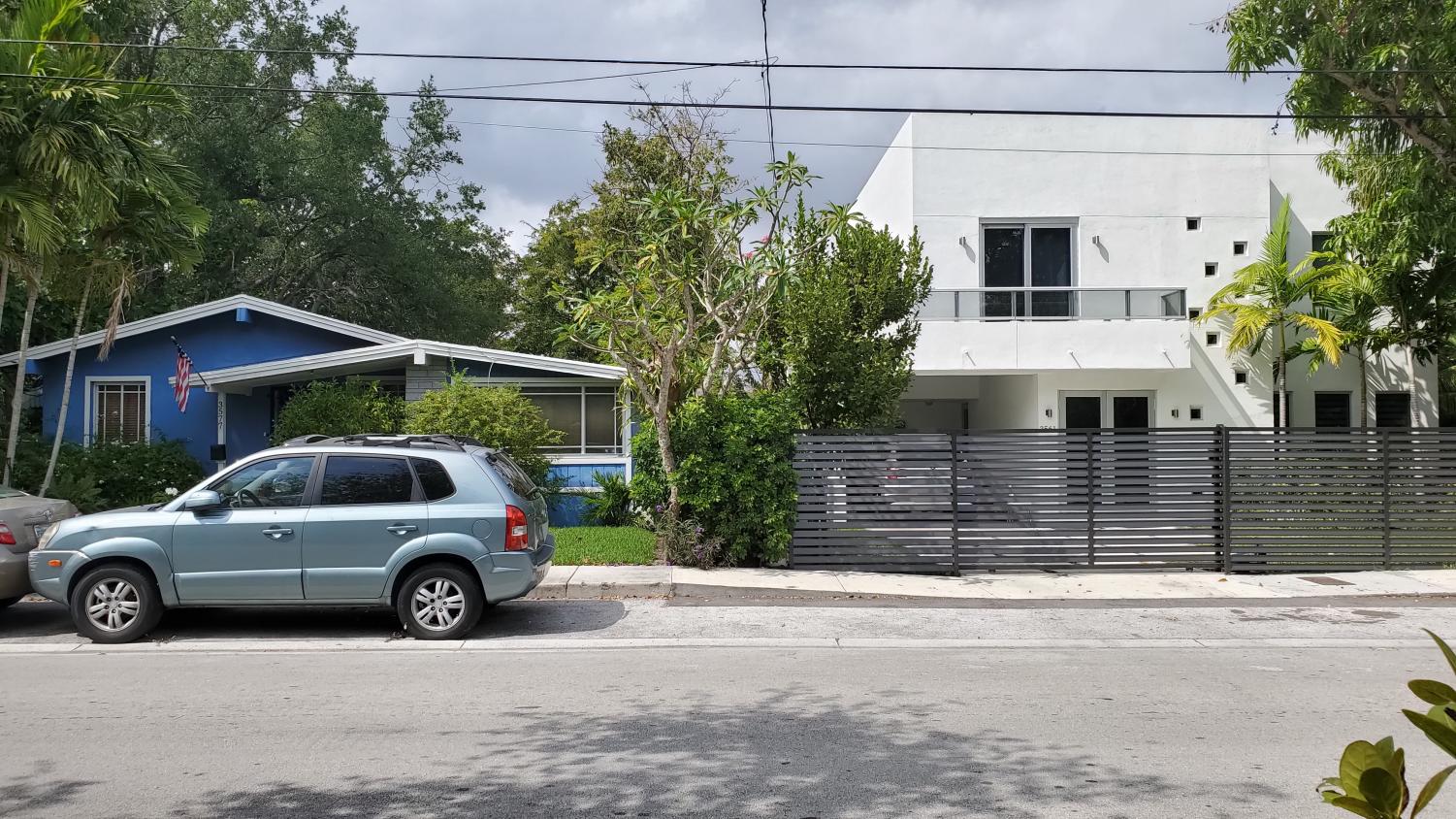 Gentrification is forcing out residents of the West Grove and replacing historic homes with unaffordable modern cubes. (Diego Duckenfield-Lopez '20)

Gentrification is forcing out residents of the West Grove and replacing historic homes with unaffordable modern cubes.

Opinion: We can’t ignore the destructive effects of gentrification in the Grove

Coconut Grove is changing rapidly. Countless development projects are taking over the West Grove replacing the original housing with ‘modern,’ white, cubic structures. These buildings stand in stark contrast with the homes built by the original Bahamian settlers of Coconut Grove. This is gentrification in full force. The Oxford English Dictionary succinctly defines gentrification as “the process of renovating and improving a house or district so that it conforms to middle-class taste.” Although this sounds like something that would benefit the West Grove, which is riddled with dilapidated housing and empty lots, it actually ends up destroying the community.

Miami has the second-worst income inequality in the United States. It is ranked the third least affordable metropolitan area in the country, and despite its diversity, it is among the most racially segregated cities in the country. Much of this can be attributed to the legacy of Jim Crow in Miami. The West Grove was historically branded as “Colored Town” and, as the name suggests, it was the designated part of the Grove for black residents during the Jim Crow Era. After integration, the black middle-class residents left, and the city largely ignored the area as it deteriorated. Now, according to an article by University of Miami law professor Anthony Alfieri in the Harvard Civil Rights-Civil Liberties Law Review, “more than 40 percent of 3,000 residents live below the poverty level.” Many of the current residents have lived in the West Grove for generations, but as the land around them increases in value, they are being forced out.

Alfieri does not like to call this process gentrification. He calls it “mass eviction”, “forced resegregation”, “forced out-migration”, and “displacement” because these terms more accurately describe the effects of the process on those currently living in the neighborhoods affected. Despite legal racial housing segregation being abolished by the Civil Rights Act of 1964, Alfieri believes that the “city of Miami actively engages in zoning that will resegregate the city.” The process of resegregation is forcing residents of historically low-income black and Latinx communities out into suburban communities surrounding Miami. But unlike the migration of the black middle class after integration, this is not a sign of upward mobility; it is “a signal of racialized out-migration and suburban ghettoization.” This is a state-sanctioned eviction of minorities that is only exacerbating the effects of generational poverty by moving them to new segregated communities on the outskirts of Miami-Dade County.

It is very easy to drive past the new developments in Coconut Grove without giving them much thought. Ransom Everglades students may attend school in Coconut Grove, but many are not even comfortable getting out of their cars in the West Grove. Phoebe Beber-Frankel ‘20 noted that “a lot of students now… still think that Coconut Grove is a dangerous place.”

Beber-Frankel, who is a resident of Coconut Grove, recounted that before she donated supplies to a church for Hurricane Dorian relief in the Bahamas, she couldn’t recall ever having stepped out of her car in that part of the Grove. Clearly, there is a disconnect between RE and much of the neighborhood that surrounds it, which most likely stems from segregation in the 20th century. But it is about time RE begins to tear down the walls that separate these two communities. Walls made of ignorance and indifference.

The reason that most people living outside places like the West Grove are apathetic towards the current changes is because they are unaware of the historic and continued suffering of these communities and their residents. The dominant narrative is that systemic racism ended after Jim Crow, and along with it all the effects of the pervasive system. But the fact of segregation did not change with the stroke of a pen in 1964, and the city has done very little to truly integrate Miami. The problem, Alfieri says, is that “most Miamians do not value integration or interracial association.” The lack of interaction between communities breeds the indifference that allows mass eviction and resegregation to continue unabated.

One program specific to the RE community that has the potential to start building understanding across communities is the Booker T. Washington Senior High School Exchange. While Beber-Frankel was there, one of the teachers said that “to go [to Ransom Everglades] puts you ahead in so many places, and [at Booker T. Wahington] you need to work so hard to get to that same standard.” Beber-Frankel said that this made her realize that “There are certain things [they] don’t start off with or they have to overcome that I didn’t have to overcome.”

It was a similar realization that led Mrs. Annie Lord ‘97 to start Miami Homes for All, a local organization that works to end and prevent homelessness through creating and maintaining affordable housing. She went to elementary school with students who lived in the public housing projects in the West Grove. She realized that “it could’ve been me… Why weren’t those people also deserving? They were also hardworking.” Unfortunately, not all RE students get to have experiences that expose them to different communities like Lord and Beber-Frankel so in order to promote awareness there must also be work done in the classroom.

In his sophomore AP United States History class, Mr. Raheem Jackson attempted to connect the displacement of Native Americans to the current displacement of black Americans in order to contextualize the history they were learning. To his surprise, the vast majority of his students had not even heard the term gentrification. He was shocked that high school students were not aware of this process, which is occurring so close to RE, and that when he gave them articles about gentrification they asked why it had to be about race.

“To me it feels like willful ignorance,” said Mr. Jackson. “We should have students think critically… and they shouldn’t be able to opt out of conversations like these.” Often education is focused on the memorization of facts and patterns in order to get the best grade possible. Education should be much deeper than that, because if students do not learn to think critically about what they are learning they will perpetuate the mistakes of the past.

Alfieri argues that a “Ransom student’s daily life is largely segregated” because privileged people make up the majority of the student body. This is simply the nature of how many American cities have developed, but this is not the way it has to remain. RE’s founders were both people who believed in the value of community involvement. Marie Swenson welcomed people of all races to the Everglades School for Girls in a time when segregation was the law. In the letter students hear every year, Paul Ransom says that he expects students to be a class of people that “believe that they are in the world not so much for what they can get out of it as for what they can put into it.”

However, in order to live up to this ideal, RE students must first be able to have a dialogue about real issues facing local communities. Mr. Jackson says that it “takes a lot of social-emotional practice” to have these conversations. If this is true, then there is no better place to get it than in high school. Through these conversations, RE can build a student body that will see how forces like gentrification are destroying communities and will do something about it. Annie Lord believes that people should use “privilege to make things more equitable.” A RE education is a privilege — one that, if we do not turn a blind eye to gentrification and other forms of destruction and displacement, can create a force for good in Coconut Grove and beyond.