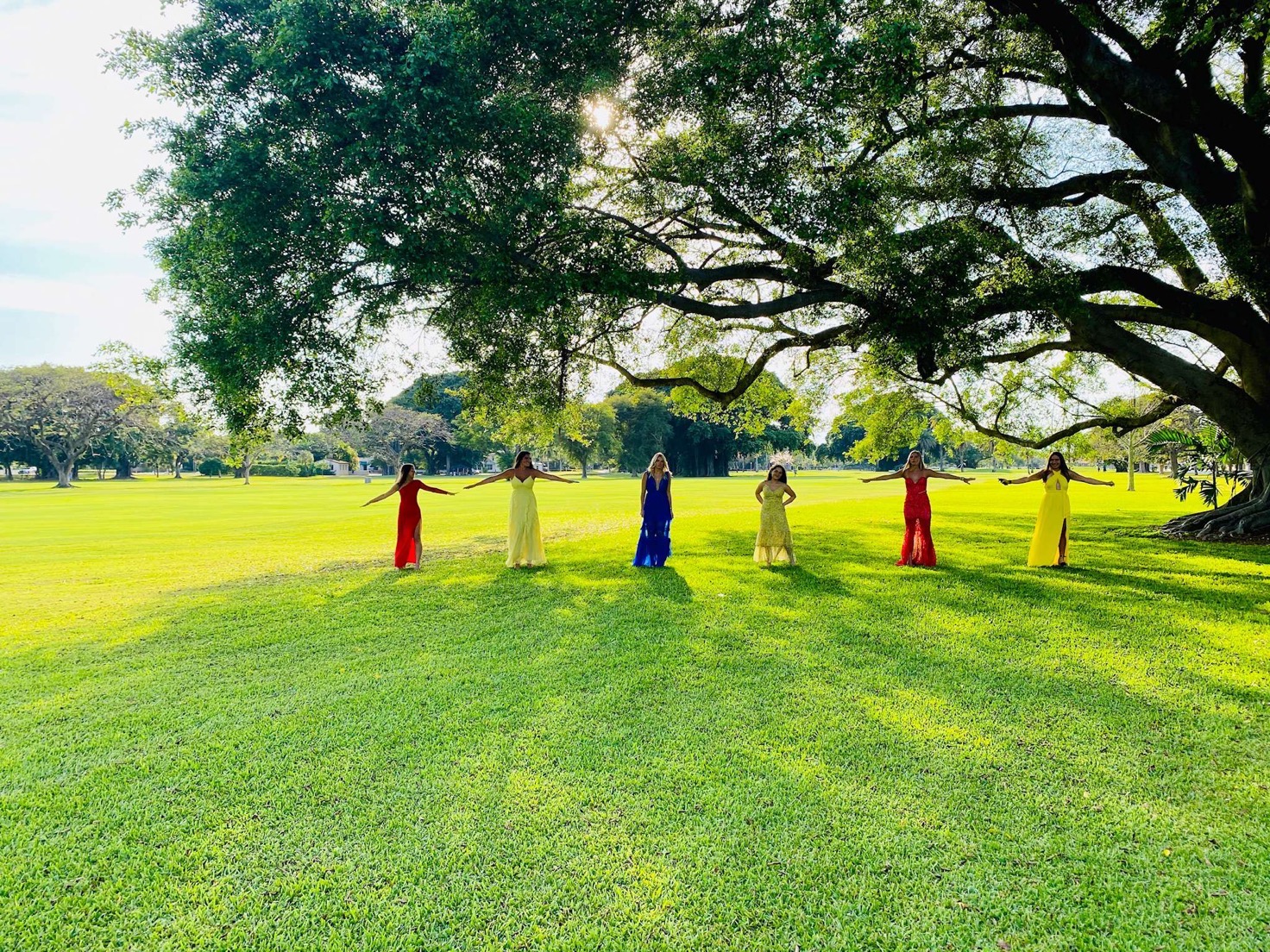 Girls from the class of 2020 pose for a prom picture six feet apart. (Courtesy of Olivia Byrd '20)

Girls from the class of 2020 pose for a prom picture six feet apart.

With every tradition disrupted by quarantine, the Class of 2020 reaches an end that doesn't feel like an end

For four years, high school students look forward to the final months of their senior year. At RE, this means celebrating college acceptances, prom, saying final goodbyes, jumping into the pool on the last day of school, and Commencement.

This year, however, Ransom Everglades seniors stepped onto campus as students for the last time in March. COVID-19 brought the world to a screeching halt, and the Class of 2020’s senior year came to an unprecedented end. The RE Class of 2020 feels a sense of loss about their senior year and an uncertainty for their college futures. But they are doing what they can to stay in touch in quarantine and celebrate finishing high school — in whatever form that takes.

Many seniors who were involved in some kind of extracurricular activity have been lamenting the loss of their “senior season.” Student Body President Preston Edmunds ‘20 played water polo, and the team was undefeated this year.

“We were going to be back to back champions,” said Edmunds, “it was a state championship ripped away from us.”

Edmunds has been a tri-sport athlete since middle school, and she was looking forward to closing the chapter on her athletic career at RE. “This was my twentieth season as a student athlete at Ransom, and this was not how I envisioned it.”

Perry Samimy ‘20 played for the boys’ team. “[We were] definitely in contention to win the state championship,” he said. “It’s a shame we had to miss that.”

Samimy also mentioned missing his last season as a member of the RE Math Team. He spoke fondly of the regional and state competitions.

“Those are the ones that are the most fun, because they’re overnight,” he said.

This year, the Math Team State Competition fell on the same day as Grad Bash, an exclusive night at Universal Studios for Florida graduating seniors. Both events were canceled, and the next Grad Bash is being held for the Class of 2021.

What would have been the Class of 2020’s senior prom was originally scheduled for April 4. That night, a few students of the Class of 2020 held a “virtual prom,” a Zoom call where some people even dressed up. For Asher Lieberman ‘20, that was the only prom he’d get.

“I was on a competitive rowing team last year,” he explained, “and I made the hard choice of not going to prom. I thought, ‘I’ll just have a killer senior prom.’”

A group of girls even dressed up and had a prom photoshoot, but maintained social distancing with everyone standing six feet apart.

“It was so surreal to really be ‘all dressed up but nowhere to go,’” said Olivia Byrd ‘20. “Everyone walking and driving by saw us. A fire truck went by and put on their sirens and honked at us. It was really sweet to feel that the community felt our sadness.”

COVID-19 also greatly affected the college process. Many seniors, including Edmunds, could no longer take college tours, which often help facilitate choosing a college. “I was planning on visiting these schools in the spring,” she said.

Seniors face uncertainty about possibly spending the start of their freshman year of college in quarantine. The prospect of another semester online is daunting. “Online learning is very difficult for me,” said Samimy. “My attention has dropped.”

“I obviously would like to start college on time,” added Lieberman, “but I do think a delayed opening sounds better than a freshman year online.”

What most seniors seem to be most upset about is not being able to properly say goodbye to high school. As Student Body President, Edmunds was looking forward to delivering her farewell address in front of a full assembly, rather than over Google Meet.

At the same time, Edmunds acknowledged that her position as President has changed dramatically since quarantine, and she takes pride in having become an even more active voice for the student community.

“There hasn’t been a day where I haven’t been emailed by the administration. I’m also doing all the stuff for the senior class,” Edmunds explained. “I’m glad I was able to step up. It helps me leave a legacy.”

Senior Send-Off and Commencement will be happening virtually, but the school is working on an in-person event over the summer, scheduled for the last week of July. Still, this class will likely not get to experience RE’s tradition of jumping into the pool on the last day of school at 3:15.

“Even if you love Ransom as an underclassmen, you’re still envious of all the senior activities,” said Edmunds. “I wanted to jump in that pool with all the other seniors…at the end of the day, we’re missing out on milestones.”

Even a final goodbye is still up in the air. It is likely that the first time the senior class is together again will likely be the last time. “All the other grades get to go back to school and say, ‘Hey, remember quarantine?’” said Lieberman. “This was our last chance to say goodbye to all our friends. We don’t get that anymore.”

In essence, the Class of 2020’s last moments in school will be logging out of Google Hangouts. “I feel bad about saying goodbye to high school by turning off the computer,” said Edmunds. “It’s hard.”

Still, they have made the most of a non-ideal situation, and have appreciated everything that RE’s administration and faculty have done to make the end of their year special. The seniors were surprised and delighted by the personalized signs of their senior pages that appeared in front of their houses. Samimy recognized Mrs. Townsend for her efforts to make the senior class feel as heard and celebrated as possible.

“She’s demonstrating her concern and care for the student body,” he said. “I really appreciate that.”

Ms. Patricia Sasser, the Head of the Upper School, commended the senior class for “navigating [the spring semester] with style and grace.”

“We never know those things in life that will test us, but [the senior class] have shown us what it means to stronger together even while spread apart,” said Sasser. “At Ransom Everglades, we cheer on our students from beginning to end. During these unusual times, there is nothing better than to be able to wrap that RE spirit and love around our seniors as we have always done.”