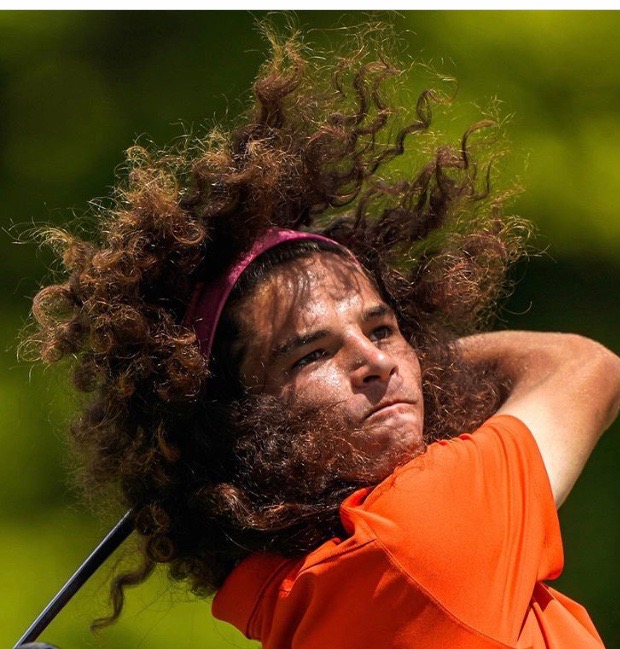 Jake Beber-Frankel ’20 hits a shot with his trademark mane of hair.

Jake Beber-Frankel ‘20 is not your ordinary ‘preppy’ golfer; if anything, he can be mistaken for a surfer dude. His long hair and colorful headbands have been pushing the dress code of the golf world for years. Beber-Frankel has even received warnings in tournaments for wearing his hat backwards or having his shirt untucked. But that’s Beber-Frankel in a nutshell. He doesn’t just win on the course; he wins with style.

Beber Frankel, a senior at Ransom Everglades, is making impressive strides towards his goals at seventeen years old. He began his golf career at the age of two and has since dedicated an estimated 10,000 hours to practicing the sport.

“Jake puts in the most practice time to reach his goals,” said Michael Myles, his swing coach since age 6. “He is totally dedicated to his craft and is relentless in his pursuit.” A PGA Golf Professional since 2008, Myles founded Prime Players Golf Academy at Key Biscayne’s Crandon Golf in 2010.

Beber-Frankel lives in Coconut Grove with his mom, dad, twin sister (Phoebe Beber-Frankel ‘20), and six dogs. Phoebe is also an avid golfer who has won national tournaments and competed all over the country—and in several other parts of the world.

The pair’s love for golf began with their father David Frankel, an Academy Award-winning director and screenwriter known for films such as The Devil Wears Prada. Frankel brought the twins to the practice range because he wanted to play golf, but he could not leave two toddlers at home alone. The bug for golf has stuck with them ever since.

Some of Beber-Frankel’s major golf accomplishments range from being the District and Regional champion and tying for sixth at the FHSAA State Championship to being ranked 30th in the nation in the American Junior Golf Association (AJGA) rankings. In 6th grade, Beber-Frankel began participating on RE’s Varsity Golf Team and went to the State Championship as an individual for the first time in 7th grade. In 10th grade, he led the team to that same tournament for the first time in RE’s recent history.

The week after his sophomore year ended, he committed to Stanford University, which boasts not only stellar academics but also one of the top golf teams in the country. The Stanford Men’s Golf Team won the NCAA Championship this past spring, and Beber-Frankel is excited to go after more championships in the future. With his commitment to Stanford, Beber-Frankel realized a dream he’d had from a very young age: to attend the alma mater of Tiger Woods, his favorite player.

Beber-Frankel’s success in school allowed him to make his commitment, as Stanford required the ability to perform in the classroom, not just on the golf course.

Beber-Frankel has competed in several prestigious golf tournaments over the years. This past summer he was invited to participate in the Boys Junior PGA Championship at Keney Park in Hartford, Connecticut. He finished 5th overall, but garnered much media attention after shooting a 10-under-par 60 on the second day, which was his lowest score ever, the lowest score ever recorded in the tournament, and the new course record.

Beber-Frankel’s golf path hasn’t just been a series of highs. For years he struggled with his temperance on the course, and it affected his game. “I was insane on the golf course,” he said. “If I hit a bad shot, a club would fly.”

Over time, he has worked on controlling his emotions, resulting in a more consistent golf game. When things go wrong, he tries to slow down, take a few breaths, and play a song in his head to keep himself relaxed. He stressed how his mental game has been the hardest thing he has ever had to overcome.

“Once you let your emotions get the best of you, there’s pretty much no coming back after that,” he said.

Many tournaments and challenges lie ahead for Beber-Frankel as he finishes up his illustrious career as a high school athlete and prepares for the next level of competition. But one thing’s for sure: he’ll be doing it in a headband.