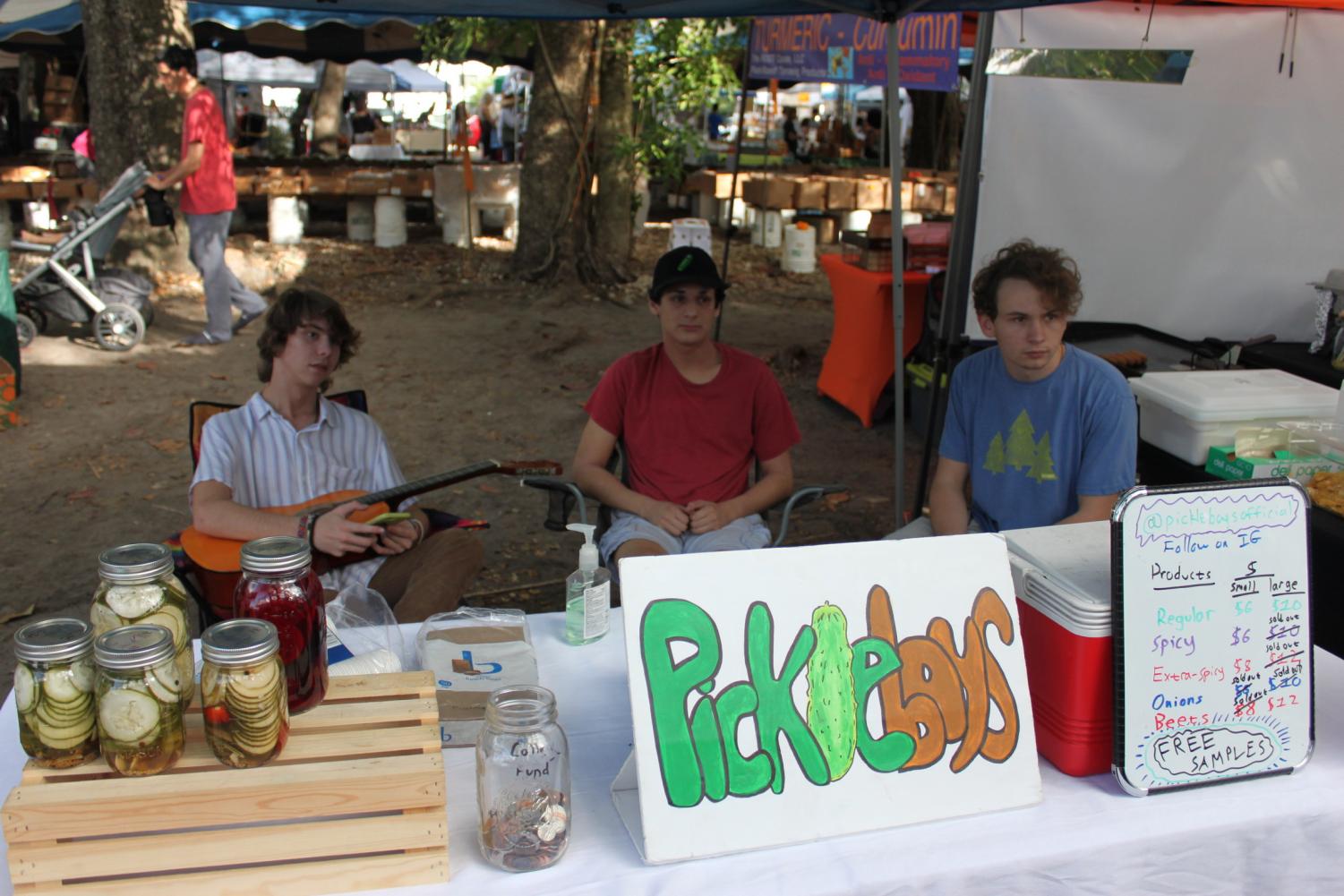 The Boys peddle their wares at the Coconut Grove Farmers Market. (Phoebe Beber-Frankel '20)

The Boys peddle their wares at the Coconut Grove Farmers Market.

Seniors Julien Bacon, Austin Charlton, and Ryan Ellison delight the RE community with their vinegary wares

Under normal circumstances, the Ransom Everglades Upper School quad is a resting place for backpacks of all shapes and sizes, most of them containing paper, books, pens, and laptops. Last year, a casual onlooker probably wouldn’t have noticed the small grey cooler sitting in the corner, filled with fat Mason jars of deliciously vinegary vegetables. But real gourmets would’ve known to whom it belonged: Julien Bacon ‘20, Austin Charlton ‘20, and Ryan Ellison ‘20, otherwise known as the Pickle Boys.

For the Pickle Boys, it all began sophomore year. Bacon had recently learned how to make pickles, and he spent the year making them recreationally. However, things began to fall into place when Ellison needed a topic for a project in his Economics class. Remembering Bacon’s pickles, he decided to make his project on the viability of pickle-selling, partially “as a joke,” in Charlton’s words. For the assignment, Ellison ended up bringing in a jar of the vegetables, and people started to ask Bacon for more.

The Pickle Boys seemed possible “a couple days after Ryan’s Econ project, when people would say, ‘Hey, can we get some pickles?’” Bacon said. Starting with only around 20 jars a week for $5 each, they increased production to make around 40 jars a week once they moved to the Farmer’s Market.

Making the pickles is an arduous process, requiring about two to four hours for a single batch of around 15 jars, Bacon said. After slicing all the ingredients, the Pickle Boys then load the jars with boiling brine (water filled with salt) and cap them, leaving them to sit for around a week before they are sold.

The way the boys sold their pickles was simple. Students would come to them with requests, and the team would bring the right pickles. The students would then pay the team, and go on to tell others about the burgeoning business. Eventually, when the pickles became more regularly-produced, the team would have regular buyers come to buy the pickle jars they brought to school, and they received the money there.

Over the second half of their junior year, the Pickle Boys’ products became more and more popular, with other students quickly taking notice. Claire Medici ‘20 described them as “delicious” and “some of the best pickles out there.”  Felipe Campano ‘21 called them “incredible,” and Alessia Gangone ‘21 mentioned how they “elevated my salami sandwich to a new level.” Joshua Hertz ‘20 agreed, calling the spicy dill “extremely spicy.”

Behind the scenes, however, the Pickle Boys grew concerned as the summer approached and their main selling venue threatened to disappear. Rather than let their business fail because they could no longer sell to fellow students, the boys decided to begin selling at the Coconut Grove Farmers Market. Charlton discussed the situation with the management, who allowed the group to sell their pickles on Saturdays. 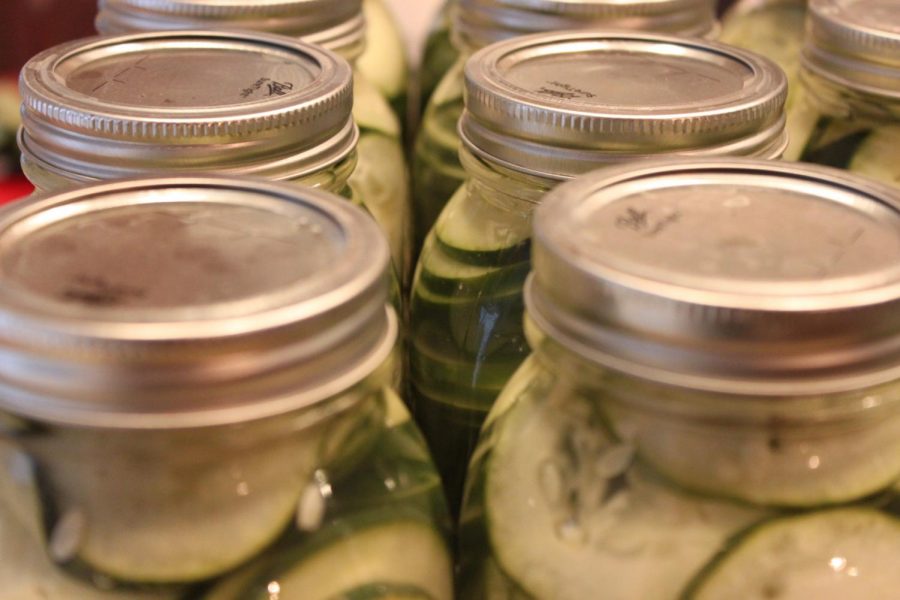 Selling at a more official venue opened up new opportunities for the trio.

The Farmer’s Market “provides a lot of valuable business experience,” Ellison said, “both managing and working, considering we have to manage both funds and our product.”

Selling at the market is not easy, with the day consisting of a six-hour shift plus setting up the stand and taking it down, but they enjoy working there anyway. And now that the school year has started, Bacon said he has started discussing the idea of a stand on campus with the administration.

While the pickles themselves continue to be a hit both within and outside the RE community, Charlton, Ellison, and Bacon insisted that the time they spend together is what matters most.

“The best part about Pickle Boys are the Pickle Boys,” said Ellison. “I just think it is fun to make a product with friends. It’s not something you’d expect to do, but when you do it, it’s a great experience.” Bacon added, “The most fun thing is the stupid stuff that happens when we’re making pickles or hanging out at the Farmer’s Market.”

“The most successful business ventures come out of people who have developed their passions,” she said. “They don’t come out of a calculated decision, like ‘I’m going to create a product to look better for college,’ but from those interests.”

As the COVID-19 pandemic brought so many small businesses to a halt this spring, it effectively put a stop to pickle production, too. But the boys are still proud of what they built, even if it has an uncertain future.

“How many others do you know at our age that run their own business?” Charlton asked. “And moreover, selling pickles of all things?” 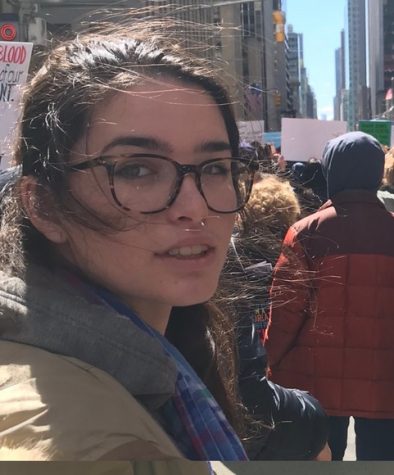 Phoebe is the Sports & Arts Editor for the Catalyst, and has been a contributor since her junior year.