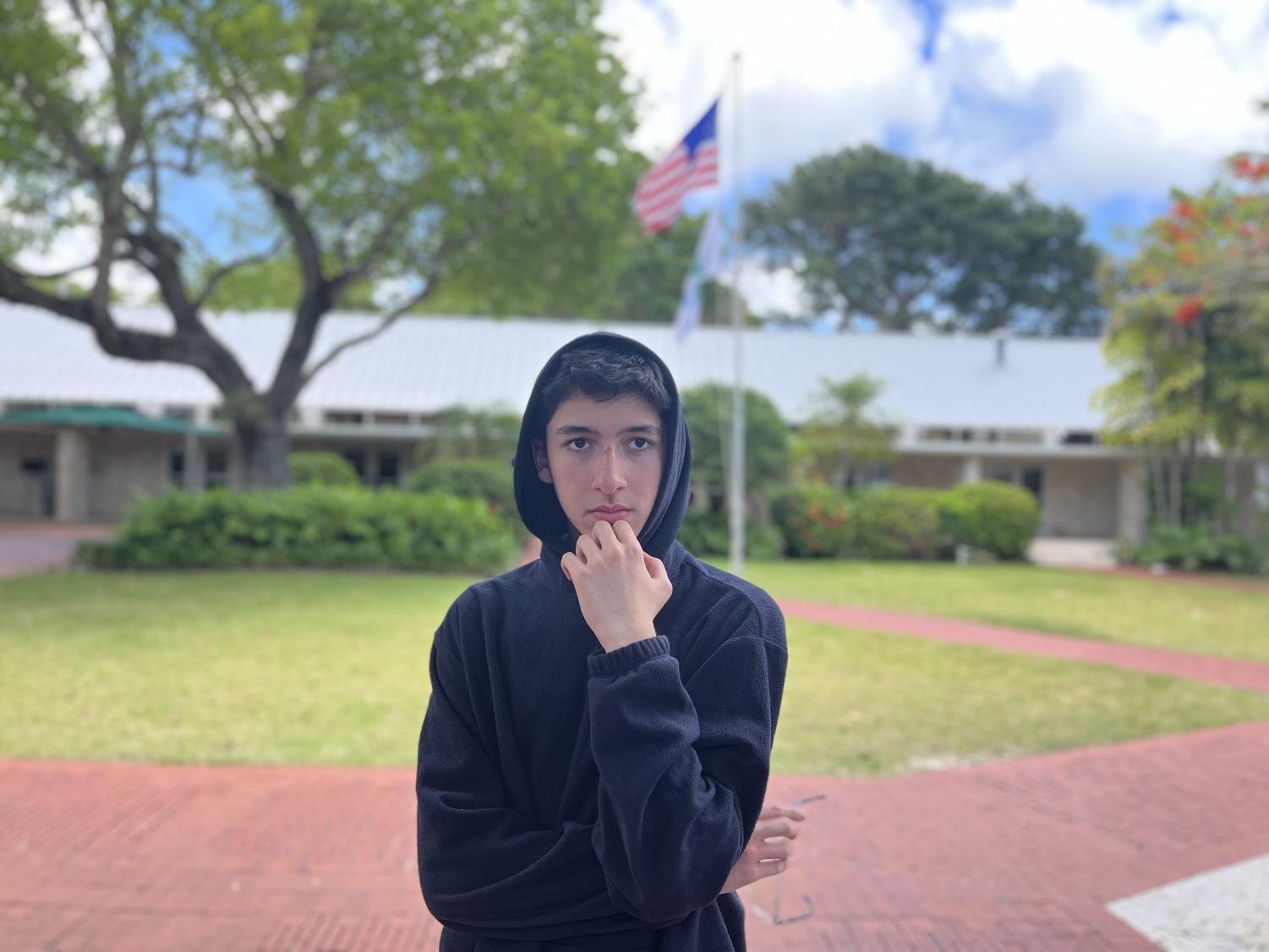 Before making a splash at the RE talent show, Ali Fegghi ’25 was writing history raps as a study tool. (Lucas Lippey '25)

Before making a splash at the RE talent show, Ali Fegghi ’25 was writing history raps as a study tool.

From “Despicable Me” to history rap: Inside the mind of “The Notorious Ali”

Although Ali Fegghi ‘25 has only been at the upper school for one year, he has already made a name for himself on campus. At the beginning of the year, he did an interpretation of Gru from “Despicable Me” for a RE Speech & Debate showcase during assembly that left many in the crowd speechless. More recently, he delivered a blistering, Hamilton-inspired rap about post-World War II communism for the RE talent show, where he performed under the new stage name “The Notorious Ali.” With only a week between the auditions and the performance, Fegghi managed to memorize a very long rap with numerous unique verses.

I sat down with Ali Fegghi to discuss his recent rise to stardom at Ransom Everglades.

Can you briefly introduce yourself, and discuss why you chose interp?

At the beginning of the year I was choosing my events for Speech and Debate. I was going to go with PF (Public Forum), but it wasn’t part of the curriculum, so I decided to do Interp. [Coach] Hamm was really great about that—she introduced me [to Interp] really well. It felt very original to me, because it was like acting, but you could also infuse it with your own personal message. I liked that flexibility. The Gru/”Despicable Me” act was my first performance, and I used it at a couple of tournaments. It worked out pretty well for me.

How did you develop the rap you performed at the talent show?

I started out right before spring break while I was studying and reading for my history class. And I came up with this idea of writing it as a song, with a sort of rhythmic pattern. I had never done anything like it before, but I am into music, and I figured it would help me remember the content. I started writing about what I had read in the textbook—it was about Japan—and performed it in class. Everyone seemed to like it; they even posted it on snapchat and everything. My teacher liked it, and it was an easy way for me to remember the information in a fun way.

And then, a couple weeks after that, I was using the same strategy to study my new content. At the time, I had no idea the talent show was even happening. So, I sat down on Wednesday night, which was about a week before I had to perform. I just dumped down all of the information from the chapter. I basically just put everything into song form. I’m also pretty passionate about history, so that helps, too. The next day, I found out about the talent show, and my mom suggested I perform one of my history raps. So I went off of my phone and read it for the audition, and there weren’t many people, so we kind of just all got in. Then I started actually memorizing for the next week. I practiced quite a bit, cleaned up the lyrics a bit, and my friends came up with the stage name, “The Notorious Ali,” which is obviously a spinoff of The Notorious B.I.G.

When I got to the stage, I was excited, and I wasn’t as nervous as the first time. It was not as intimidating to go up in front of everyone the second time. It was a very fun opportunity. Everyone seemed to like it. There was even one time when I yelled into the mic and got a cramp. I forgot to breathe for a bit too long.

What artists were your influence for the rap?

I listened to Eminem quite a bit while rehearsing. I tried to use the sort of nasal voice that he has. Lin- Manuel Miranda is another big one. I’ve listened to him a lot, and I think that influenced my style with rhyming and lyrics.

How did you decide on using ‘Despicable Me’ for your speech and debate act?

I really like that movie. I used to watch it a lot with my sister and family. The Gru character always did his accent, and I’ve always done impersonations and things of that nature. I had this connection with the movie, and a lot of lines were fresh in my mind. So when I had to pick a piece and cut it and perform it, I decided on ‘Despicable Me.’ It has engaging characters, and it was easy for me to memorize the lines.

I started posting it on YouTube. You can check out my channel: Ali Fegghi. I really enjoy doing impressions, and it’s very fun for me.

What other impressions have you done?

I’ve done Palpatine from “Star Wars,” Gru’s brother, Donald Trump, Biden, and some other politicians. I can do a lot of accents, but those are some of my favorites.

Did you have any previous background in the arts?

I had never done drama, but I’ve always been a singer on my own. I was in the choir in elementary school, but I’ve never been fully engaged in the arts. I did play piano from when I was six years old until just recently. I stopped due to the pandemic, and then I started again a few months ago. Mr. Hamm wants me to join one of the bands next year, so maybe I’ll do that in the future.