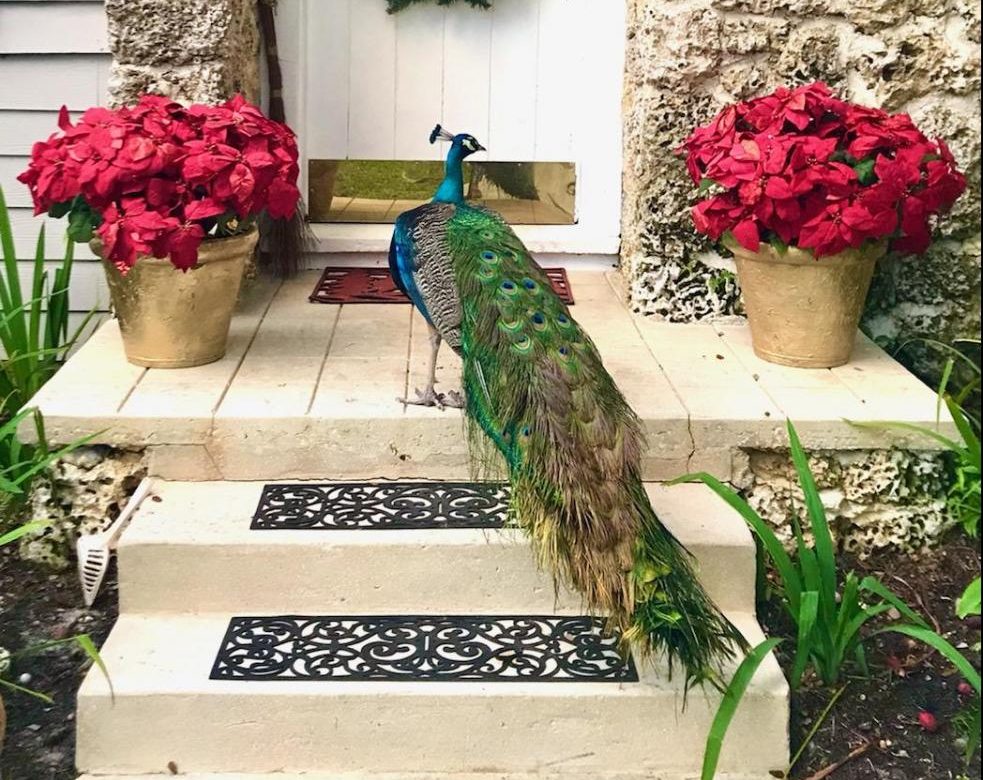 The pros, cons, and mysterious origins of Coconut Grove's peacocks.

Seen by some as a mascot and by others as a driver’s worst nightmare, peacocks have been integrated into the urban life of Coconut Grove for as long as residents can remember. Tourists coming into the Grove for the first time will likely be in awe of these fascinating pheasants that cross the streets, litter the parks and show off their plumage in front of shops. Groveites, on the other hand, are used to them, though many still view them with wonder and inspiration, making them the subjects of art displayed throughout the Grove. They have generated many conflicting points of view about their continued reign in the area. One thing’s for sure, though: these birds aren’t your average pigeons.

The origins of these imperial birds in the Grove have stumped many residents. Even in my search for evidence of their first arrival, I came up empty besides a few theories and legends of how they supposedly began their regime. According to Animal Diversity Web, the species Paco cristatus, or the Indian blue peafowl, originates from the Indian subcontinent and has been brought all over the world through trade. Another article from The Weather Channel indicates that during the 1950s-60s, developers brought them to new Miami neighborhoods to make their homes seem more exotic. The website also suggests they escaped from zoos.

The most concrete and specific speculation comes from Grove resident and local artist Eileen Seitz, who recounted talking to the very person behind the release of the first peacocks in Coconut Grove. She recalls running into him 11 years ago and having a conversation with him about how he was gifted two peacocks from a few friends of his as pets. In typical invasive species fashion, they escaped, and the rest is history.

Regardless of their mysterious origin story, one thing’s for certain: these birds have made a mark on the Grove. Commonly talked about by visiting tourists, peafowl make quite an attraction with their feathery dowery. Particularly during the mating season, when the males showcase their envy-inducing tail feathers in hopes of attracting a mate, their display is truly a sight to behold.

When asked to name their favorite thing about peafowl, Grove residents overwhelmingly comment on the beauty they share with the Grove. Even Dr. Kristine Stump, an AP Environmental Science teacher at RE, gushes about these birds despite their invasive status.

“I love their feathers! They’re very pretty and they’re very decorative” she raved. “I love seeing them during the spring when they’re in their mating rituals, when the males have their whole feathers out. It’s so cool to see them rattling and shaking. It’s just so neat. It’s like, even though they’re not supposed to be here, they’re gorgeous and they’re wild and they are just living their best life in the Grove!”

For Esmerelda Swietelsky ’24, the appeal of peacocks derives from their exotic nature and authenticity. “It’s just really cool to see animals that you wouldn’t normally see if you to live anywhere else on your way to the school. You just see a peacock and that’s like a really ‘Grovey’ thing,” she said.

Other Groveites appreciate how the peacocks incorporate the beauty of the natural world into their everyday lives while coexisting with the suburban lifestyle of the area. For instance, Dr. Corinne Rhyner, an Upper School English teacher and longtime Grove resident, reflected on how the peacocks remind her of the turkeys she grew up with in the Northeast, and how unique it is to share a home with the wild animals.

“They [the turkeys] are nowhere near as colorful and beautiful as the peacocks, though they may have similar intelligence, which is not very high,” Rhyner said. “While both are not the brightest of animals, I really I think it’s magical to observe the animals. Especially in a city, I had the opportunity to grow up in a more rural setting, so it’s pretty special for me to get to see animals living in the wild.”

Doreen Locicero, a retired artist and local Grove resident, has even found opportunities to form close bonds with the peacock families in the area. Largely stuck at home during the pandemic, she has taken the time to observe the wildlife right outside her home and often supplies the birds a source of food in exchange for their lovely presence. Pretty Boy, an affectionately named male peacock, is a friend and common visitor at Locicero’s residence.

And while many of her neighbors say that all peacocks look the same, Locicero argues that these peacocks have just as much individuality on the inside as people do. Describing Pretty Boy, she said, “You just get use to one particular bird, the way they act. He walks right up to me, on the right of me, and I’ve pet him before also… He really has a personality, and he’s very protective.”

The very morning of the interview, Pretty Boy even decided to pay a visit to his favorite human, peeking at her door to say hello and grab a snack.

But despite the bohemian feel peafowl give to Coconut Grove, there are many not-so-positive opinions about their long-standing reign. For one thing, they have become worthy challengers to speedy Miami drivers, standing their ground against their vehicles as they try to get to work or school on time and attempt to beat the traffic on the way home.

As Jackson McAliley ’23 put it, “I think that they’ve kind of gotten too comfortable… When they cross the street, they take their time ‘cause they know that no one’s going to hit them, so they just kind of stop, and it gets annoying. I’m not saying we should be running the birds over, but I still think that it can kind of be annoying.”

So, if you have a need for speed, then Coconut Grove backroads are not the place for you. As a result of calling South Florida their home for generations, they’ve developed enough confidence—or lack of concern for self-preservation—to cross the road and get to the other side. To Leah Croom ’24, this characteristic of the fowl is quite admirable, albeit bothersome at times.

“I would definitely say the audacity of the birds [can get annoying],” Croom said. “I mean, they will not stop at anything to just have their way, which I respect in some regards, but I’m also trying to get to school on time, so it’s a Catch-22.”

The peacocks are also notoriously loud, their screech often compared to the yelp of a cat in pain. Just ask Dr. Stump; she’d love to share her (scarily accurate) impression of it. But as Ms. Locicero explains, their unique call usually happens during mating season, lasting “only a short period of time,” and for her, it’s just as loud as the feral cats are in her neighborhood.

Despite these complaints, many are still willing to live side by side with these birds. Residents recognize that the peacocks belong in the Grove just as much as they do.

Businesses, public places, and art have been inspired by their beauty throughout CocoWalk. You can easily find yourself eating at the Peacock Garden, while admiring passing peacocks, and later hanging out at Peacock Park. You cannot walk through CocoWalk without passing by some very inspiring peacock art, namely the fiberglass peacocks that sit in front of buildings and walkways.

The peacock statues came from one of the community’s successful public art events in 2010, where local businesses sponsored artists to paint sculptured fiberglass peacocks. “What better creature of magnificence than that of the peacock to share with the public?” said Ms. Seitz, one of the artists who was sponsored. That love of peacocks can be seen in a number of her pieces, from Majestic Peacock, a fiberglass peacock in front of Milam’s Market, to her tropical paintings in which the birds often make surprise appearances.

Tea Vallone ’24, like many others, sees the peacocks as the Grove’s mascots. She recalls how when she was little, “I would always go stand next to the statues, sit on one and my mom would take pictures of me and we just love those peacock statues… which is interesting because they’re not native to Florida.”

Love them or hate them, in their own way, the peacocks are ingrained into the identity of Coconut Grove, uniting and inspiring community members by pursuing their right to be the glamorous birds they know they are. In Ms. Seitz’s words, “They are not caged and they’re not pets. They’re living in our environment and we’re living on their land. So yeah, I think they’re an important part of the Grove.” 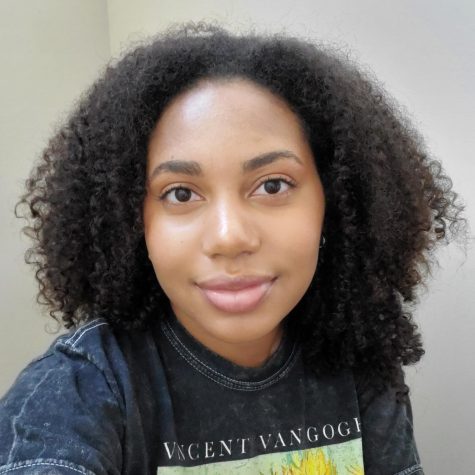 Dominique Smith '22 is a staff writer for the Catalyst. She specializes in features and multimedia content.