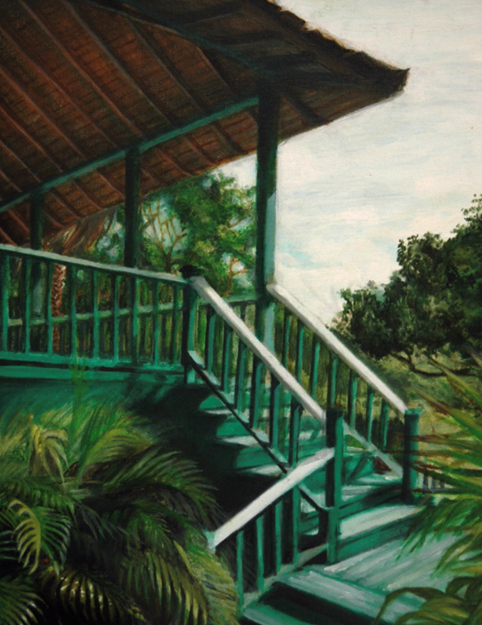 All impact of man has gone

As the scene passes

In the center of it all

Looking to the sky

I would like to dedicate a poem to Mr. Che and his family. I would also like to dedicate a painting I made the same year to Mr. Che and his family. The poem is one I wrote while on the China trip with him. The painting is one I made at Ransom Everglades School. He was my teacher there for four years. I learned so much from him through his sharing of his experiences from China and from his passionate teaching at Ransom Everglades School. I am a private person but I wanted to share these pieces and the personal anecdotes below to emphasize the impact he had on myself others. I am one person, and he had a similar positive impact on countless other students.

I wrote this poem while on the first China trip Mr. Che organized in 2010. He fought for this trip. He had just started teaching at Ransom, but somehow he used his fiery energy and fervor for educating the next generation on alternative worldviews to make it happen. I remember being on the train in China and looking out into the world. I saw this scene that felt almost unworldy. It was this barren, ethereal landscape that looked almost post-apocalyptic, like no living thing should be there. The atmosphere of a scorched earth after a war, after industrial growth and decay. Something reminiscent of a T.S. Eliot poem from The Wasteland Series, as a friend later pointed out. There was a single man in the middle of this scene with a kite and there were a few trees peeking through the rubble. When I wrote I never thought that 10 years later it would come back to haunt me in a sad but beautiful way.

I’ve always considered myself a visual artist, not a poet. But this piece sprung forth from me that day. I wasn’t able to capture this scene with a photograph as it flitted by the window of the train. But it made a deep impression on me, as did Mr. Che’s passion for teaching and for the well-being of his students and the next generation of the world. This poem feels like an allegory for Mr. Che’s life, living through an environment where humanity feels lost but making it through it alone and bringing hope and new growth. Mr. Che’s life was like a seed that had made it through an unforgiving winter that survived until the springtime. The seed grew into a tree that gave off many branches that bore fruit and new seeds that brought new life to the earth. I feel like each student and individual he made an impact on through education and care was a branch of this tree. We each have the potential to impact others in similar ways and improve the next generation. Mr. Che’s passing is devastating but it is a reminder that we can carry on his legacy through empowering people through education, through inspiring hope during difficult times, and through opening people’s eyes to the breadth and beauty of this world.

I hope that I can personally help carry on his legacy through empowering students with education and hope. I’m grateful for the worldly experiences he imparted to me in my youth, both through his perspectives of the world and the opportunity to live in another part of the world radically different from that which I came from. This poem is one of the oldest notes in my phone, the oldest being the contact information from my host family on the China trip organized by Mr. Che. I remember this trip vividly. Life seemed so rigid for the students at Beijing Normal University. No extracurriculars, always studying. But I remember my host sister’s passion for singing. She and her boyfriend had the most beautiful voice. They were so in love. Her family loved her so much. They didn’t have much. A tiny apartment. But I realized they didn’t need much. They had love. They had education. They weren’t oppressed as the previous generations had been. Being an intellectual and loving the arts was not an offense. Today I realize that Mr. Che helped contribute to the massive effort that made this possible for these wonderful people. He contributed to improving the lives of so many people both in his home country and in our country.

I am grateful for Mr. Che for impacting me and so many others on a deeply personal level and for contributing meaning, knowledge and hope to my life. I remember being in the first class Mr. Che taught at Ransom and being so impressed by his energy and skill for teaching. I had never had a teacher that passionate. He taught us so much about language and culture and was like a living history book. Even with all the hardships of his life, he still felt empathy for my sister and me when our parents were going through a divorce and would talk to us outside of class and help us through it. He changed our and so many other students’ lives for the better by enabling us to understand a different way of life through experiencing life in China. The worldview I gained from this experience from a young age helped me get through an emotionally and mentally draining and stagnant period of my life as I pursue a career in medicine. The life lessons he taught me showed me that it is worth it to undergo this period of suffering in order to ultimately improve the lives of many others. Mr. Che’s passing happened at a particularly difficult period of my life as I am on the brink of no longer being a student for the first time that I can remember and becoming a physician. His passing, while devastating, has brought a somber clarity and strength to my pursuit to one day be the type of person, educator and mentor he is. I know he has impacted many others the same way and will always respect him and have a special place in my heart for him. He was a truly special person and I hope that the students, colleagues friends and family he impacted collectively work together to continue his efforts of establishing positive change and creating good in the world.