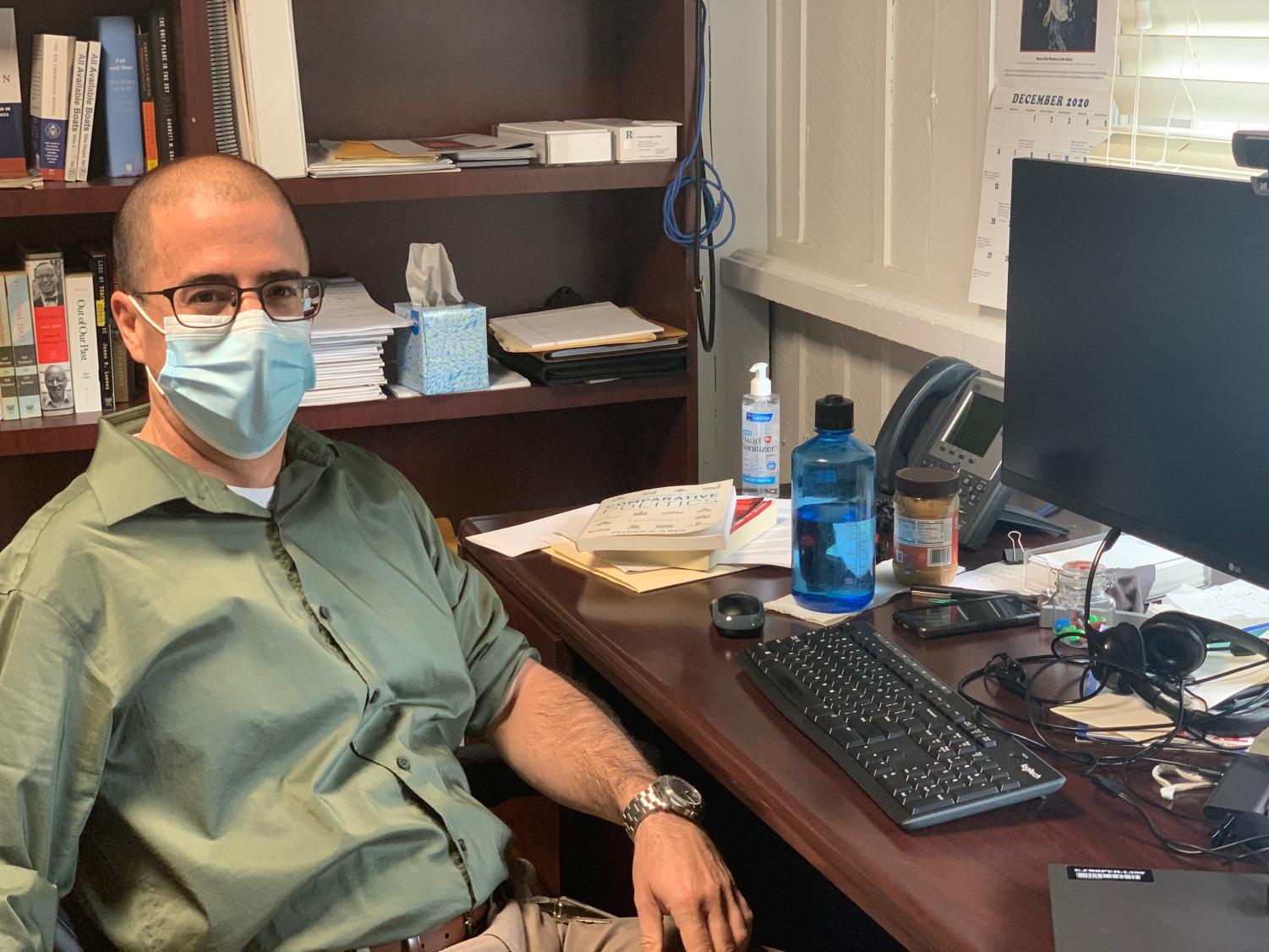 Mr. Cooper is known for his politics classes and his infamous green pen. (Joan Joseph '21)

Mr. Cooper is known for his politics classes and his infamous green pen.

In today’s climate, with the pandemic making it more difficult to meet new people and our political polarization destroying civil discourse, it’s challenging to learn about the people around us. Every single person has a story, a reason behind why they wake up each morning, and a side to them that may not match what meets the eye. A common sighting around campus is Mr. Gregory Cooper, typically with a water bottle slung across one hand. While we know him as a member of the RE community for over a decade, a teacher of AP Government classes and history electives, a stickler for schedule changes, and a leader on the honor council, who is he? What makes him who he is? What are the things that inspire him each day?

Recently, I spoke to Mr. Cooper via Google Meet for a little over an hour. During our conversation, which has been edited for length and clarity, we spoke about his teaching career’s backbone, his arrival to Miami, theater, and poll watching.

Where are you from, and would you ever go back?

Wyckoff, NJ. I never lived anywhere south of Philadelphia until I was 30 and moved to Miami. I miss the seasons. No one can convince me there are seasons here. But then I go back for breaks, and the high is at 15, and it’s sleeting, throwing ice in my face, and I realize I don’t miss it all that much. I’ve been here for 12 years, but I could see myself back up there to maybe retire. Not anytime soon, though.

In your life, what are some of the most significant events?

9/11. That was the defining start to my teaching career, and I can’t tell you what it changed because it was the start. Certainly what we are dealing with right now, if you ask me in five years. I think the financial crisis in 2009; I might have had different job opportunities, because at the time I was looking for a job and ended up down here. I can’t think of huge life-defining moments, and I am not sure if it is a bad thing or a good thing. I think it is a good thing. I’m not a big ‘defining moment’ person. Things just sort of unfold how they do.

You were the one who created the Criminal Justice, 9/11, and International Law and Human Rights courses. What prompted them?

On a macro level, as a school, we think more about the diversity of courses offered. With criminal justice, back when we could go places, we would go to the court, and it struck me one day it was a very teachable course for high school. You don’t need a law degree to study legal stuff. That was student interest and my own background. I like doing it; it is what I studied.

The 9/11 course was a similar idea in that it was such a defining moment for me and the entire country. We didn’t offer it this year, but it ran for three years, and we had enough distance from that point to put it into context. The class would not have worked in 2010, for example, because that is still too close. The repercussions, the wars—you know, you guys don’t know how it is to travel without the TSA. A lot has changed over time.

For International Law and Human Rights, I wanted to take a break from the 9/11 course because it is not the least depressing class in the world to teach. Not that I’m sure human rights will be better. Like criminal justice, it crosses so many areas. We start with philosophy and the question of whether it makes sense to have a singular conception of human rights. We throw around a lot of terms, but everything is so much more complex.

What do you do for fun?

I read, run, and see plays. I don’t enjoy crowds or staying out late, but I enjoy traveling.

In terms of theater, what are some of your favorite productions?

Oh, now this will take me a long time to answer.

I hate defining bests. People ask me for things like my top 5 movies, and I can’t do that.

One of the best things I ever saw was [Deaf West’s] “Spring Awakening.” I got tickets for the original cast of “Hamilton,” but I was searching for something else to see. I was in NYC for a few days and wanted to see more shows. I was speaking with former RE students who were theater students in New York, and they directed me to a production of Spring Awakening. It was big in the early 2000s. It was a coming of age, pressures of society, and youth pushing back type of story. And it was an OK musical back then. I remember seeing it down here in Miami, and I was like, oh, it’s OK, it’s good. There is this theme in it about a failure to communicate between adults and teenagers.

But the production was revived on Broadway a few years ago by a company called Deaf West. They do musicals and plays for the deaf community, and all the actors sign everything; about half the actors are themselves deaf, and they were doing this production of “Spring Awakening.” And what they did with it was fascinating. Every deaf person had a hearing counterpart who sang for them, and I’m not describing it well, but the theme of ‘failure to communicate’ was very real because literally, half the cast could not communicate directly through speech. And the only characters who did not sign were the adults. Anyway, it was brilliant. It was, far and away, better than “Hamilton,” which I know is very sacrilegious to say. Both shows are not similar in theme, but they do share the idea of voiceless people and having a voice.

“Rent” was a very turning point musical too. I was in high school, so ‘96-ish. A rock opera about the AIDS crisis and the LGBT community, but not directly. A New York story. For me as a high school student, it was a moment where I went, “Wait a minute, this is what musicals can be.” It was this rock musical, with gay characters kissing on stage for probably one of the first times in mainstream theater. I saw it three times on Broadway, and I still remember going with our NHS. They go each year, and I remember sitting next to my world history teacher. We didn’t use the term “woke” in ’96, but she was the opposite of it. She did not get this show at all. These 19, 20-year-olds protesting authority, and I guess in some ways, it was like “Hair,” this musical from the ’70s [in which the characters are] protesting Vietnam. It was anti-authority. I think [the original] “Spring Awakening” tried to do that, and it wasn’t as good, but still good. The genre is still prevalent.

You said Rent had this anti-authority message. Why was that something that appealed to you?

I mean every teenager, right? I think it was dealing with issues we thought were real issues at the time, and adults in power were ignoring it. It was sort of a strange vehicle because it was set at the height of the AIDS crisis [in the 1980s], so by the time it was on Broadway, it was outdated in that respect, but how it dealt with urban poverty, sexuality, not doing things because society tells you to do things—it had a very teenager message. Not in a bad way, but it really fit with the time. There wasn’t really anyone in the show who were adults, and the “adult” figure was really someone their same age who they had gone to college with, who had kind of sold out to the corporate ‘man.’ So it had that kind of vibe.

I have been reassured that the institutions I have spent the last 21 years teaching about are holding, and protecting against some of this.”

Have you ever been involved with politics or government outside of your class?

Not professionally. I clerked for federal judges in law school, so I think that counts, but besides that, no. I have done campaign poll watching in 2004 in the presidential campaign and 2018 down here with the midterm elections, but nothing formal other than summer work.

So you poll watched before the election. Now, seeing everything happening against poll watchers, how does that make you feel?

I find everything going on pretty ridiculous. In class, we’ve talked about this, and the saddest part is that the people working in these polls are just trying to make the election run. These are not partisan people. For example, I had a student, she was a first-time voter, and when she told the people, everyone applauded and cheered for her. They don’t care who you are voting for. I don’t want to be overtly political, but it certainly, unfortunately, did not surprise me. [Former President Donald Trump] has not been shy of attacking the basic structure of government for four years. It is not a political statement, a thing to do with Democrats or Republicans; it is what he has done.

I find this so depressing. A central part of our government is free and fair elections. We even criticize other countries that don’t run elections very well. But I have been reassured by the courts, who are apolitical, including courts with judges appointed by the current president. They say what I’m saying: ‘No merit to any of this, and it is destructive to American democracy.’ I have been reassured that the institutions I have spent the last 21 years teaching about are holding, and protecting against some of this. When I was poll-watching, we were sent with marching orders to be vigilant, and they were not telling us to do anything wrong; rather, they seemed to imply there was going to be massive voter suppression. I saw nothing of note anytime—just people who want to go vote. And people at the polls who wanted to enforce the rules well.

Who is someone you look up to?

Since we talked about law school earlier, I would say the first judge I ever worked for: a federal judge, Louis Pollak. He used to talk about how he didn’t know what he wanted to do in law school. His dad was a prominent civil rights attorney, who I think was actually on the Scottsboro Boys case. He was invited by a friend to work on “these school cases,” which ultimately became Brown v Board. He wasn’t Thurgood Marshall, obviously, but he was on counsel relating to Brown v. Board with Thurgood Marshall. He was very humble, and as an 82-year-old judge, he could quote things from memory. And I still remember we had a case about a guy convicted of a violent crime. And the judge—you don’t ever see this—gets up, comes down off the bench, and shakes everyone’s hand, including the man in handcuffs and prison jumpsuit. He was a very ‘see the humanity in everyone’ kind of person. I have never seen a judge come off the bench and shake hands with a criminal defendant. It still sticks out to me.