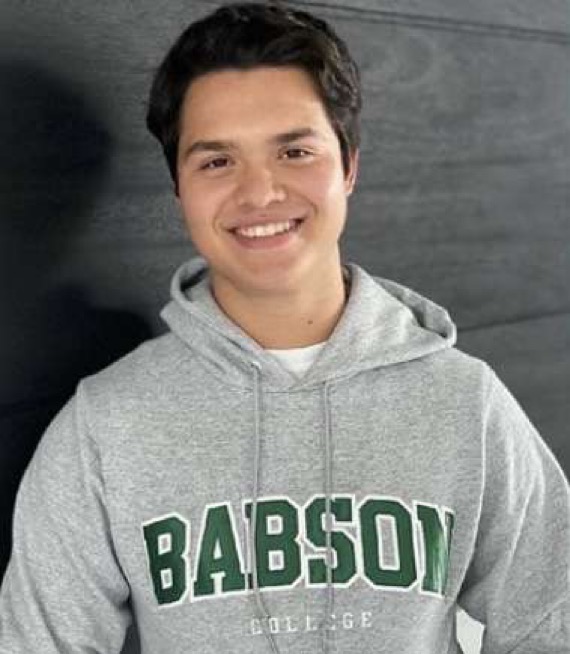 Freshman year of college is an adjustment under normal circumstances. This year, Leyva says, it has been a new kind of strange. (Isabel Souffront '21)

Freshman year of college is an adjustment under normal circumstances. This year, Leyva says, it has been a new kind of strange.

Humans of Ransom Everglades: Alec Leyva ’20 on college during COVID

Alec Leyva ‘20 started at Ransom Everglades as a sixth grader in 2013 and graduated seven years later in 2020, during the height of the C0VID-19 pandemic. During his time at RE, Leyva was on the Football and Lacrosse teams. He was also involved in various clubs at RE as well as in the greater Miami community. Leyva finished off his time at RE virtually and had to experience a virtual graduation. Leyva now attends Babson College in Boston, MA, where he is studying Business.

I recently spoke with Leyva over FaceTime. During the interview, we discussed many topics, from college life during a pandemic to his most influential mentor at RE. It was interesting to see his perspective on the pandemic, as he is a freshman in college whose college experience has been drastically disrupted. He reminisced over his time at Ransom Everglades and the valuable lessons he learned there that he took with him to Babson.

Can you tell me about someone who has had a big influence on your life? What lessons did that person teach you?

Someone I would say is my dad. He taught me a lot about the kind of person I should be and what a good person should do, the kind of man I should be. My dad had the biggest influence on me because I relate to him the most. Being the only 2 boys in a house of girls does that. He also inspired me to do business.

Can you tell me about one of your most memorable experiences or moments in your life and why it is memorable?

One of my most memorable experiences was… I used to run this club in high school, that I no longer run because obviously, I am not there anymore. The organization was called His House, but we were the student ambassador program. We had a project; we had to remodel a cottage for orphans. When we finally did that, it was probably one of the coolest, most memorable things that I’ve done.

Can you tell me about where you go to school now and how you ended up there?

Well, I go to Babson College now. I always knew that I wanted to study business. When I visited Boston, I knew that I wanted to go to school up there, so I applied to every business school in Boston, and I actually got into Babson EA [Early Action]. It was a school that I didn’t research a ton, but when I did actually get in and start researching it, I loved it, and it seemed like a really, really, really cool place that kind of had a lot of the stuff I wanted. So yeah… I ended up going, and I’m having a great time.

I always wanted to study business because I was inspired by my dad. It was also something that I was always interested in from a young age. The need to be a part of that world and understand it drove me.

How do you feel your high school experience at Ransom Everglades shaped or prepared you for college?

One of the big things is that Ransom teaches you how to talk to teachers and develop relationships with them, which in college is super important. You know, office hours, one–on–one time, letters of rec for job interviews: especially at Babson, a lot of my professors are members of clubs, or own companies, or know people with their own companies and know people that can get you internships and stuff like that. So, especially if it’s a subject that you’re passionate about, having a relationship with that teacher is super important, and I think Ransom, with extra help and just the approachability of a lot of the teachers made it easier. It’s a skill that I didn’t have to develop; I kind of already have it, which is good.

How did being on the football team in high school benefit you, aside from getting better at football? What did you take away from it?

One of the things I learned being on the football team was how to persevere, not give up. Also, when you messed up, to move on from it. Like, “Yeah, you messed up,” don’t ignore that, but don’t let it hold you back. Learn from it, fix it, and move on.

Who was your most influential mentor at Ransom (teacher, coach, etc.)? Why?

Definitely, Dr. Margini. Why Margini? That’s a good question. I don’t know, he taught me a lot, especially about writing, and he helped with a lot of stuff, to develop my skills. For example, my English course [at Babson] is the one course I’m not struggling in. It’s my best grade by far and I think it’s because of a lot of the stuff that he taught me. Also, he taught me how to do stuff that you’re passionate about with his video game class and his journalism class. Those weren’t classes that existed until he made them exist because he felt passionate about that. So… I don’t know, I thought that was very cool that he ended up doing something that he was passionate about. So yeah… I guess those would be the two things about Dr. Margini that I would say influenced me the most.

Have you ever had a job? If so, tell me about it.

I had an internship. It was unpaid, it wasn’t really a job, but it was cool. It was a Ransom–sponsored internship at a place called Lab Miami. It was actually one of the reasons why I ended up going to Babson. It was just an entrepreneurial workspace; I actually interned there with David Civantos, another one of Margini’s students. I didn’t do a ton. I was only there for four weeks. I wrote blog posts, I helped edit their podcast… What else did I do? Just internship stuff… I mean, being in the environment was very cool. It was a very relaxed, very bohemian environment, and I guess that job was important because it’s like the “entrepreneurial culture,” and that’s one of the things that I wanted to pursue at Babson.

How has COVID affected your college experience? How do you think it will affect your future after college?

Oh, it sucks. You can’t really do anything. It’s a lot of being in your dorm room and just hanging out with some people, but there aren’t any parties, there’s no really going out. Like I go to school 20 minutes—actually less than 20 minutes from one of my closest Miami friends, and I don’t get to see him that much because of COVID, because it’s kind of hard to do stuff. All we can really do is get dinner. We can’t go to sports games, which are a big part of the college experience, we can’t go to a party, there really aren’t a lot of places or options to hang out. After college… I don’t know, I think I’m learning a lot of different things in school, through the lens of COVID, and my relationships with people are very different because I’m seeing people not in a party scene, which I guess is interesting because I get to know them better than I would otherwise. Once it ends, I’m not sure how it will affect my life.

What did a normal day for you look like now that your classes were virtual?

My classes weren’t totally virtual. I did asynchronous learning, which is some classes in person, some classes virtual, and then some lectures which would be online, or you wouldn’t have class a certain day, you would just have busy work. I don’t really like that style of learning; I prefer to be in class with a teacher. Also, I kind of pushed back against watching the videos of lectures, or I would do something while I watched, so I wasn’t totally paying attention. This made it harder for me to retain the information, which is obviously not good. When I was in school, I’d do that. I would also try to work out. The hardest thing about the first semester of college is getting into a good routine… I didn’t do that until the very, very end [before coming home], and by then it was kind of too late. But for next semester I think I’ll be in a better routine and actually have it together. The biggest change was definitely asynchronous learning, because I did not learn a lot. I mean, I did learn a lot, but I would’ve learned more with normal class and learning.

About the Contributor
Isabel Souffront '21