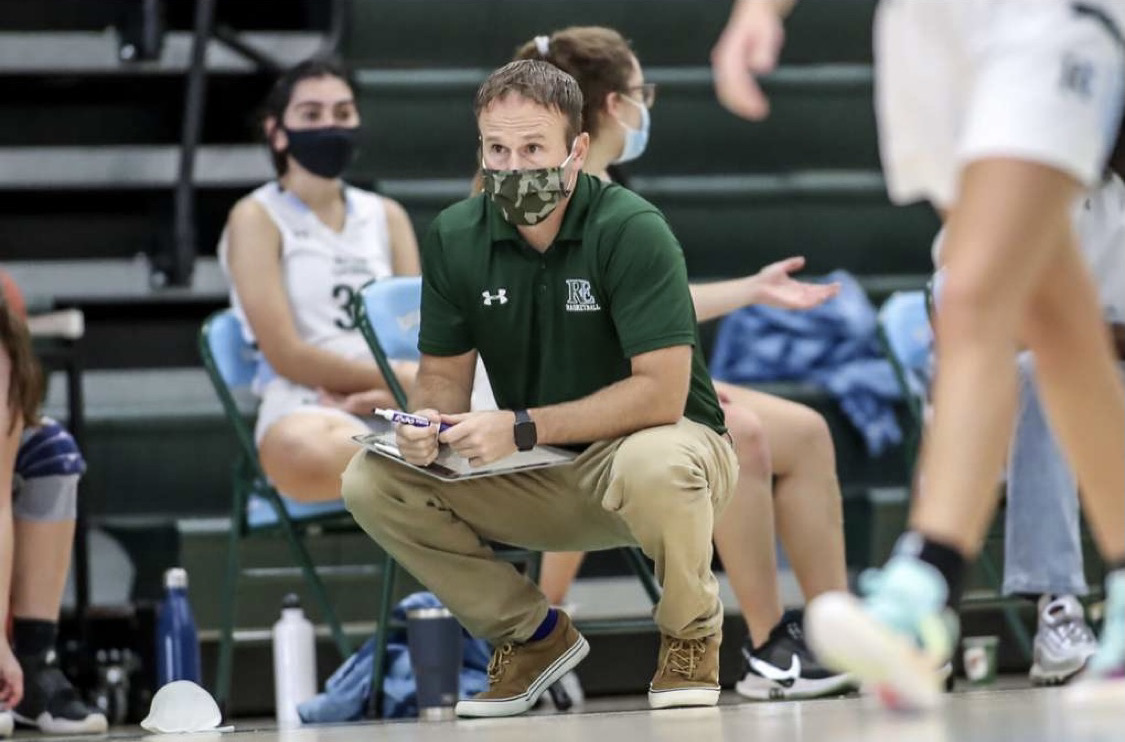 Coach Supple looks on during his second season coaching Girls’ Varsity Basketball at RE. (Courtesy of Carl Kafka Photography)

Coach Supple looks on during his second season coaching Girls’ Varsity Basketball at RE.

Humans of Ransom Everglades: Girls’ Basketball Coach Joe Supple on what it takes to be a great coach

Anyone that has played sports knows that it’s much more than just a game. Camaraderie is built through countless hours a team spends together. Through the shared experiences of relishing wins and supporting each other through losses, great teams become families, and a cohesive and family-like team is the mark of a great coach. For the members of RE’s Girls’ Basketball program, Joe Supple, the head coach, is exactly that. Several team members spoke to his ability to unify players on and off the court and push them to be their best selves.

I recently spoke with Coach Supple for 30 minutes over the phone to give the greater community a glimpse into his personality and journey leading to RE. During the conversation, which has been edited for length and clarity, we discussed his upbringing, passions, values, and even his favorite music artists.

Your players say that you’re a big fan of the phrase “cultuRE wins.” Why do you think culture wins? What does that mean to you?

It means that the program and the concept and beliefs that the program is built on are more important than any individual player, any individual play or skill. I think teams that are all on the same path and follow the same beliefs are usually more successful—and not just on the court but off the court as well. So, you know, small things like setting your goals, working towards those goals, and being on time. Those are the type of things that don’t just relate to basketball. They relate to life as well.

For sure. High school is a very transitional period. For most kids my age, a lot is changing constantly. It seems like that culture can be super beneficial, as it provides some stability. Thinking about this, how would you define your job?

First off, I obviously want to try and make the team the best basketball players that I can. But more importantly, I want my players and students to learn those skills we just talked about—like accountability. I try to hold my players accountable, whether that means being a good teammate or being on time and prepared. Those are things that no matter where they go, will all translate and benefit them.

Was there one specific moment you can remember where you were like “Coaching is what I need to be doing”?

It goes back to 8th grade, honestly, but yeah, I had originally gone to college for engineering and just hated it. I became a volunteer youth football and basketball coach, and it just clicked. I knew I needed to be around sports, and I knew I wanted to be around young people when it comes to teaching. I’ve been coaching since I was in 8th grade, but college was the first time where I realized that coaching is what makes me happiest.

That makes a lot of sense. I don’t think a lot of people know that you studied engineering. That’s very cool. What’s something else that you think more people outside of your core circle should know about you?

What’s something you have changed your opinion on since high school?

There are a lot of things. Naturally, when you’re in high school, you feel like your whole life is in front of you. Now, at my age, I realize that half of it is behind me. But one thing I can think of off the top of my head is just family values. When you’re younger, you want to go hang with friends, and your family sort of takes the backseat. But as I grew up, I realized more and more that your family needs to be put in the forefront. I try not to take anything for granted when it comes to that.

What’s something you’re really grateful for?

Can it be a single person?

My mom. She was a single mother who worked many jobs to get me through. She did a lot that now, you know, I look back on and say, “I definitely would not be the person I am today without her.”

That’s amazing. Recently, with the pandemic, there has definitely been a restoration of perspective as everyone is appreciating family connection on a whole new level. What has been the best and worst part of quarantine for you?

I read more books during COVID than I probably have in the past ten years. Before school started, there were so many hours in the day where I had this new opportunity to put some purpose into everything routine thing I do. I worked out more, spend time cooking healthier meals, etc. Professionally, it gave me a chance to really evaluate how I coach and teach. I think through that reflection, I became a better teacher and coach as well.

Oh god – it’s gotta be something 90s or 2000s hip-hop. A bunch of old school stuff. Jay Z is definitely up there. But I operate on two completely opposite sides of the spectrum. I’m a huge Billy Joel fan as well. When I was younger, everyone was really into DMX and Nas. so that would hype me up.

Love it. Here’s another offbeat question for you: have you ever gotten a nickname that you didn’t like?

Well, this is embarrassing, but “Joe Head.” It’s because I have a big head. It started when I was six and lives on today—my best friends still call me that. In complete honesty, I get it. It got to the point where it was just my name, and I didn’t care, and it didn’t matter.

I think your head is the perfect size. You have a very cool last name though. People can always greet you with “Sup Supp.”

And they do. Constantly.

OK, let’s say tomorrow is your perfect day. What are you doing?

Something adventurous. On a beach somewhere—somewhere where water is involved probably. Like jet skiing or whitewater rafting.

For sure. Who are you bringing?

My best friends, definitely. There’s a group of us that have stayed very close since we were 10 or 12. A couple of my cousins: we’ve gone on some crazy adventures together. I’m the godfather of two of their children.

Sounds like a very fun day. Back to coaching briefly – how did that decision in college of wanting to become a coach full time play out for you?

I just realized that I should be doing what makes me happy, because if not, what’s the point? I made the mistake of listening to everyone else going into college. So after being at UConn and being in the School of Engineering, I realized that it wasn’t sustainable. I love math and science, so it wasn’t that. I mean, I consider coaching a lot of math and science as well. I was just sitting there studying 24/7 and thinking, “I can’t do this for the rest of my life.” And I still had those part-time gigs coaching, so I leaned into that some more, and now I’m here.

If you could describe your life in a couple of sentences, what’re you going with?

I would say a I came from a poor family that worked extremely hard, learned a lot of lessons from my mother on what it takes to grind every single day. Went through a lot of ups and downs, and it was all of those situations and mistakes that helped me become a better person, teacher, and coach. I love what I do every single day. I refuse to get outworked. And I just try to show up and make the best of every day. Every day can be a great day.

That’s a great story. You’re super optimistic—have you always been that way?

I think I’ve always been optimistic. I think that just comes from my upbringing. Being grateful for things that you have, not always being able to do or have the things I wanted growing up. I think I was just always grateful for opportunities. I think sports played a major role in that optimism. You face challenges, but you realize that you’re just going to get up in the next play. So, just always trying to make the best of every situation. You’re gonna face a lot of bad situations in life, and if you dwell on all of them, it’s not gonna be a very happy life.

That’s very profound. Growing up did you have any odd jobs?

I’ve had a bunch. In like fourth/fifth grade, I was a newspaper delivery boy. I would ride my bike at 5 am. By middle school, I worked in my brother’s flower shop.

Do you like flowers now? Are you a big flower guy?

Well, the thing is, it’s not all good. I couldn’t give my mom flowers for holidays because she would probably fight me. But yeah, I painted houses, I worked as a garbage man, I was a delivery boy. So I’ve had a bunch of unique jobs.

It sounds like you’re into the grind. Are you getting your 8 hours of sleep?

I haven’t gotten 8 hours of sleep in a long, long time.

What would you do if you weren’t a coach?

Probably something in finance or something in numbers. I couldn’t be an accountant. I can’t sit at a desk all day. I’ve always been interested in the construction of bridges and tunnels, so maybe some more engineering.

Yeah, for sure. Why did you pick RE?

It was kind of random. I was in the process of making a jump to college. I got an offer at a D2 school in New York. Then, my resume ended up at Ransom. Coach Goff called me, and we talked for fifteen minutes or so. I just saw how much potential there is for growth at a school like Ransom. Once I flew down for my formal interview, I saw the campus and met the people. Obviously, Miami is a nice, busy city. I just thought that this was a better opportunity for growth and maybe a stepping stone for something bigger.

Definitely. What is a piece of advice you would give to high school or college you?

No one knows you better than yourself. People are going to tell you to do a lot of things, but don’t get too caught up in it. People are going to influence you, but what’s most important is to trust your own instincts. Don’t chase the money. Do what will make you the happiest each and every day. I hate to use the phrase “you only live once,” but YOLO.

What do you think the best’s thing that’s ever happened to you?

Ten years ago, it would probably be a completely different answer. But now, I’d probably say my godchildren.

The Catalyst • Copyright 2021 • FLEX WordPress Theme by SNO • Log in