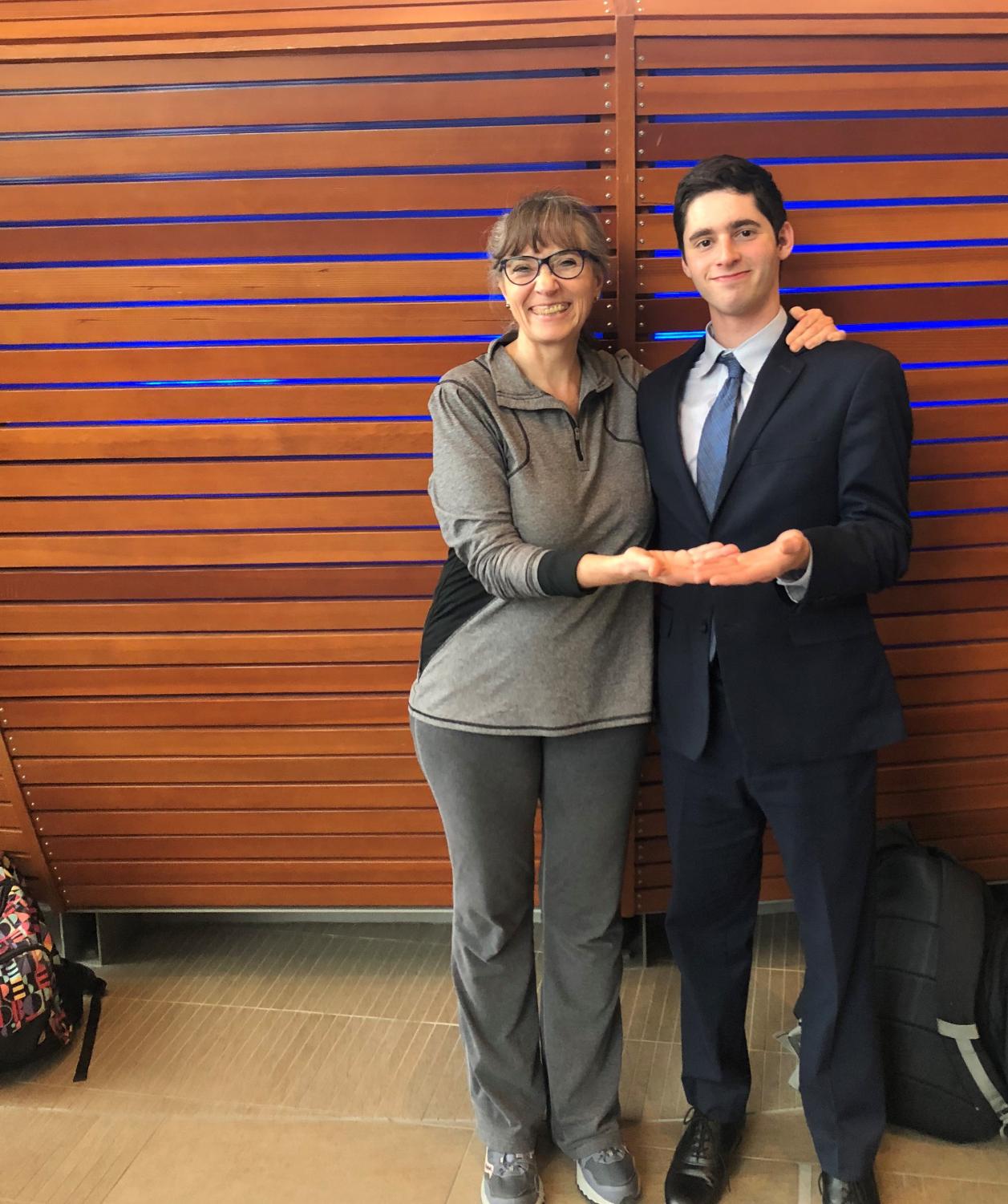 Coach Hamm celebrating at a Speech and Debate tournament with Danny Jackson ’21.

Coach Hamm celebrating at a Speech and Debate tournament with Danny Jackson ’21.

Speech and Debate has been a huge part of the high school experience for countless RE students. The program challenges its students to be able to understand complex ideas, think on their feet, and speak confidently in front of strangers and peers. Public speaking is America’s number one phobia, but RE’s Speech and Debate program operates with the goal of giving students the ability and opportunity to overcome this fear and share meaningful stories. By teaching students in the class how to make a compelling presentation and forcing members to confront their tone, pace, and body language, the RE Speech and Debate program aims to turn students into capable, persuasive, confident speakers. None of that would be possible without Kate Hamm, the Speech and Debate team’s coach and leader. Six years ago, she joined the RE faculty and changed the face of the school’s Speech and Debate Program. Today, the program has over 118 members and has students competing at the state and national level.

This past week, I sat down in the Math & Science S105 “dungeon”—the old Engineering room, now the Speech and Debate headquarters—to speak with Hamm. During our conversation, which has been edited for length and clarity, we discussed how she first became involved in teaching Speech and Debate and how she ended up teaching at Ransom Everglades.

Could you tell me how you first started teaching Speech and Debate?

When I first started teaching was in either 1983 or ‘84. The reason I went into education was because I was in marketing. I was working on my MBA, and I realized that I hated working with adults that didn’t do things in their own self-interest. I worked in marketing so I would create marketing plans for, let’s say, a hardware store. You have to understand where your market share is in comparison to the other businesses that sell similar products, so you do research and you present a market plan for a client. They would say things like, “I wanna be on the radio in Wisconsin.” It was like, you’re a neighborhood hardware store. People in Wisconsin already have hardware stores that they can go to in their neighborhood. “No, I wanna do that because I wanna get on the Iowa Badgers radio show.” They were willing to waste thousands of dollars on stupid stuff, and I just found that I couldn’t do this anymore. At that time, I was working directing theatre. My husband was working in the music department, and he said, “You work really well with kids. You should teach.” And I said, “Yeah, ok.” I had my transcripts evaluated, and they said all you need to do is take like four or five classes and you can get a teaching certificate in Iowa.

I continued working in marketing, and then I went and got another job in banking so that I could make enough money to pay for college, and in a year and a half, I got my teaching certification. There was a school that needed a debate coach. I said, “I don’t know a lot about debate, but I know a lot about presentation, so how different can it be?” And I taught myself debate that year. I was directing the musical every year, and I was running a debate and speech class, and after the first year they gave me more classes and just kept adding them. The speech and debate program just became very successful. Both my husband and I were teaching at the same place, and we thought it might not be such a good idea to have both of our incomes coming from the same place. The public school in town offered me a job and I took it. I taught at that high school for 3 years. It was at that school that the Speech and Debate part of me started exploding. I just had awesome kids. I started with freshmen, and every year they kept getting better. I kept teaching them after I moved to Iowa City because the school didn’t replace me with anybody. I’d go to them once a month, and they’d go to me once a month.

Did you compete in Speech and Debate in high school?

I got my start in 8th grade. I was the state champion of Interp [interpretive speech] for junior high. I did “The Notorious Jumping Frog of Calaveras County” by Mark Twain. I can still do part of it. [She belted out the two lines that she still had memorized.]

In high school I did oratory all four years. I even remember the topics. My freshman year was alcoholism and abuse on Native American reservations, Sophomore year was about the threat of suicide on genius and how geniuses take their lives too early, my junior year I don’t remember, my senior year was on shutting down the Minnesota pipeline—an underground human trafficking ring out of Minnesota and Wisconsin. I remember in the spring of 1975, leading into the bicentennial year, people were doing “get out the vote, be patriotic” speeches, and I was doing a speech about ending human trafficking. I did storytelling my sophomore, junior and senior years. I was the queen of weird voices. [She proceeded to demonstrate.] I hated competing against this one guy who was really good at physical performances. I was this round, chubby, Broomhilda kind of performer, and I had these braids that would tie up, and I looked all goofy, but he couldn’t do voices, and I would have all these funny voices.

I knew speech events, but I didn’t know debate. Everything about debate, I taught myself. I did a speech in college a little bit because that was one of the things that people in the theater did. Because I wanted to act, but I was never an actress, it was my way to do different kinds of scripts and stuff. I didn’t really care about winning—I haven’t changed much that way—but I just wanted to understand these stories and these characters and what drove some of these characters to do the thing that they did. I found them all fascinating.

I do believe in that Paul Ransom letter. It’s who I am. It’s one of the things that, when I saw it, made me want to be at a place that believes that.”

I know you taught in other countries like South Korea, would you mind telling me about that?

I started in Europe; Korea was down the road. I left Iowa City in 2002-2003. My theater program had really taken off, and I wanted to do training in special techniques in the theater like computerized lighting and design, and I couldn’t do that while teaching full time. I decided not to go back after the first year of sabbatical. I took an extension and went to New York to see what the East Coast offered. Then I went to Nebraska; I didn’t like New York. They weren’t my people. Omaha was as close to Iowa as I could get, so I went to Omaha and really did not enjoy that experience at all. That was at a time when Omaha was really ultra– ultra– ultra–conservative, and it was very white-flightish. I just couldn’t deal with that. At the same time, we were doing things in Iraq that I thought were crazy, and I just decided that I need to get out of here. I met a guy who worked for a large glass company, and he had a family and wanted his children to study in the United States, but they didn’t have fluent enough English. He said he would bring me to France to work for Becton-Dickinson [the glass company], and he would give me room and board if I taught his children how to speak English. I worked for Becton Dickinson teaching chemists and marketers how to communicate with people and make PowerPoints. I was training adults in how to overcome cultural communication barriers. The people in engineering in Mexico had to work with the people in quality control in France, and man, they would fight. I was teaching them that the cultural differences were what were getting in the way and that they needed to let go of them and just focus on the problem at hand. Work on the glass problem, not how much you hate the guy from Mexico or Japan or Ireland or Korea. I tutored and got connected to the International Debate Education Association. I worked for IDEA creating curriculum for Amsterdam, Paris, Italy, and I taught speech and debate camps in Italy for two different years. I’ve taught in Turkey for a month-long camp. I did a camp where I just taught teachers in Bahrain. I taught social workers in a place in Amsterdam. After a stint in Turkey, I was offered a job in South Korea and went to Korea for three years.

How did you end up at Ransom Everglades?

The head of the National Speech & Debate Association, whom I had worked with in Iowa City, contacted me and said that there was this Broward initiative with the goal of having every high school have a speech and debate program within 10 years. I was contacted by Nova High School to see if I wanted to work there and work with the initiative. I was at Nova for 2 years and found that there were things about the program that I couldn’t tolerate. The woman that I worked with was less than an honest person, and when I blew the whistle there, I had to leave. Mr. Rywell, who had been at Ransom, contacted me and said, “Kate, would you be interested in a job at Ransom?” And I came to Ransom. It was a good choice. It was a really good choice. The freedom I have is incredible. I was worried when I came here: the reason I came to Florida was to help disadvantaged students. I really came down to work with minority students who didn’t have any opportunities. [A former RE student whom she had met at a tournament] got me to know Ransom through him. He was the one who told me that yes, Ransom is a private school, but the kids that you teach there, you can change to have a greater impact on the world. You can save kids at Nova, for sure, but that’s affecting one child. If you can change a kid at Ransom, they can go out and touch hundreds. So that was a pretty big sales point. I do believe in that Paul Ransom letter. It’s who I am. It’s one of the things that, when I saw it, made me want to be at a place that believes that. The fact that Mrs. Townsend reads that every single fall is really important to me, and I don’t care how corny that is.

All I can do is say I hope so. When people tell me that I’m doing a good job, I say ask me about it in 10 years. That’s when I will know. Trophies aren’t those things up there [she gestured to the trophy rack in the room]; trophies are people who graduate from Penn and go into the Peace Corps and then come out of the Peace Corps and change things. One of my Nova students came out of the Peace Corps, a few of my other students have joined the Peace Corps. One of my students is getting a master’s degree in sustainable development so that he can work in communities to change the world. Those are the things that I consider a success. I cling to that because I know that I can’t directly affect change, but my students can. That’s really important to me. 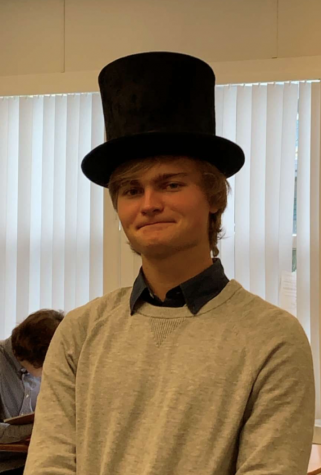