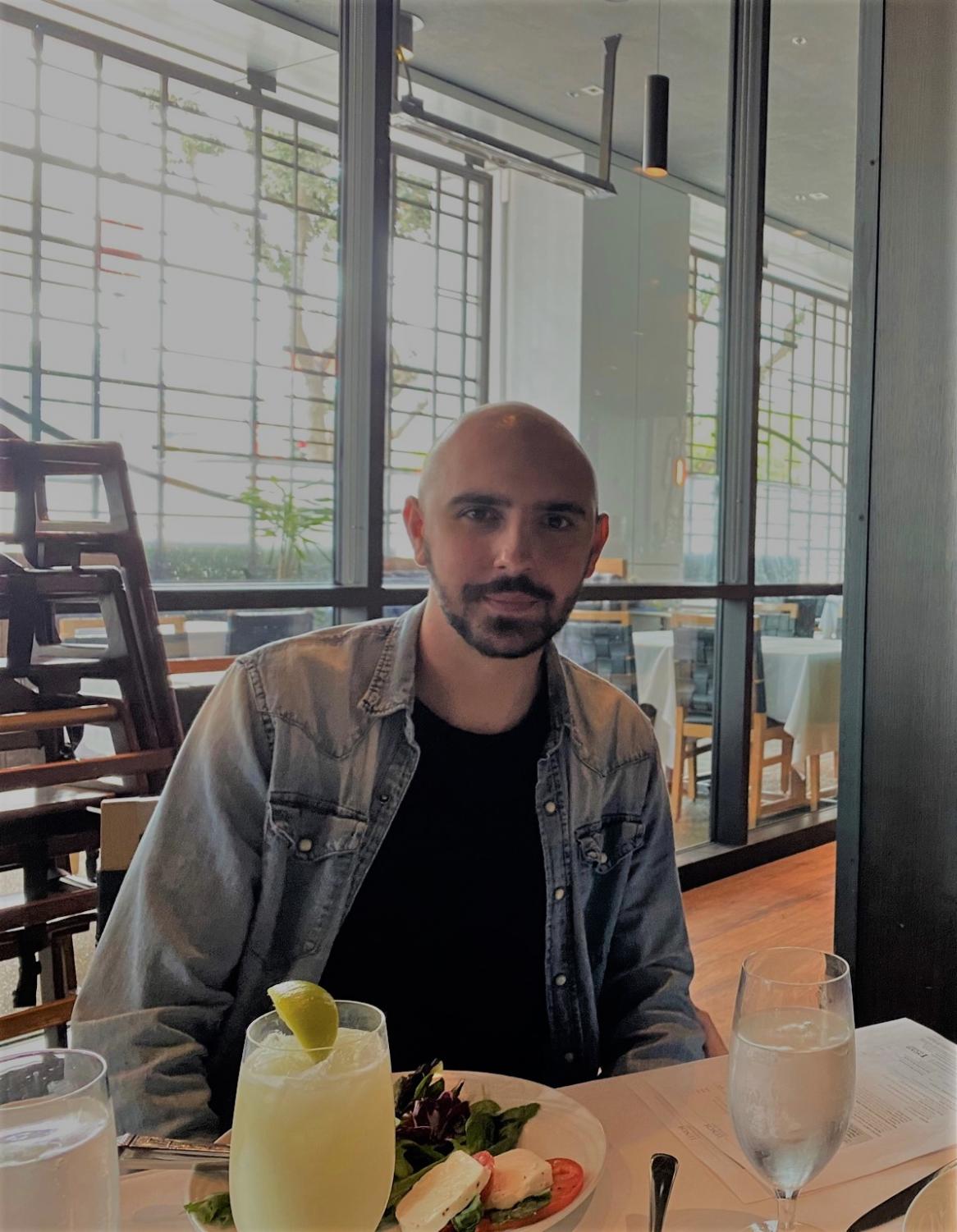 Balboa, a cancer survivor, is doing cutting-edge work at the intersection of quantum physics and computer science. (Adri Cappello '21)

Balboa, a cancer survivor, is doing cutting-edge work at the intersection of quantum physics and computer science.

Humans of Ransom Everglades: William Pol Balboa ’14 on the future of quantum computing

During the last 10 months, almost everyone has discovered new ways to use their computers, smartphones, and apps to stay connected. We purchased, replaced, and upgraded our devices and internet services to accommodate the newest realms of connectivity as we tumbled into the brave new world of the “new normal.” With the need to stay connected to jobs, family, friends, and daily necessities, many people have realized the possibilities and limitations of the devices and apps we are currently using while Zooming happy hour with friends, shopping for groceries on Instacart, or seeing a doctor virtually. Regardless of the bandwidth available, sometimes even new devices struggle. When everyone in the house is Zooming, streaming, shopping, and surfing virtually, the technology fails, making our lifelines staticky and unreliable. Without the next technical revolution, this could be as good as it gets.

Enter Ranson alum William Pol Balboa ‘14, a quantum software engineer at PsiQuantum in the San Francisco Bay Area, who studied quantum mechanics and quantum physics at the University of Chicago. Last Friday, I had the pleasure of interviewing Balboa, a cancer survivor, about how the events in his life, both good and bad, led him to the field of quantum computing. With his degree in Physics and a minor in Philosophy, he began working in the field of quantum computing, a field that promises to begin the “net tech” revolution that will make our current technology look like yesteryear’s electric typewriters. During our three-hour conversation, which has been edited for length and clarity, Balboa shared his personal story of how he came to be working in a field he loves. While earning his Bachelor of Arts, Balboa faced cancer and found an area of study that endlessly fascinates him and makes him feel like his contributions in quantum computing will be a way of giving back to the world.

At a high school level, can you briefly describe what your profession is?

Today we use our conventional computers to do a wide range of tasks: everything from streaming movies to developing websites to simulating flight. However, some tasks are harder than others. In fact, there are some specific tasks that are so difficult to solve, that not only could your iPhone not solve it, but not even all supercomputers on the planet working together. To address these kinds of problems, some folks are building quantum computers. These are computers that use a different set of rules from conventional computers; they use the principles of a branch of physics called quantum mechanics.

Looking back at your high school career, what skills and/or tools have been beneficial to you and your career?

A few things. For one, taking physics classes (shoutout to Mr. Natland!) sparked an interest in majoring in physics in undergrad. However, most of my interests while at Ransom were actually outside of physics, and I think trying to maintain a wide variety of interests outside of work has been beneficial for me in my career. Of course, the technical end of what I do has definitely been helped by studying specific subjects, but a good deal of working life has nothing to do with the specific technical nature of one’s work. A lot of working life has to do with navigating relationships, be they with a colleague, a supervisor, a client, and being able to communicate ideas with people. Having Harkness table discussions in many classes in high school helped me learn how to communicate ideas, many times even disagreements, respectfully with other folks.

But more than any of that, I’d say the general air of unapologetic curiosity that is encouraged at Ransom. At my company I am both honored and intimidated to work with folks who I consider to practically be wizards, and it is so important for me to be able to admit when I am clueless about something! The quantum community more broadly greatly encourages asking questions, which makes it much easier to admit ignorance. I think openly recognizing that you don’t know the answer to a question is an important skill to cultivate (in and outside of work), and one I was lucky was often advocated for around me while at Ransom.”

Entering your first year at the University of Chicago, did you know of quantum computing? When were you introduced?

I had never heard of quantum computing (QC) until my third year of undergrad. I declared physics as my major when I first got to school, but I decided to also minor in philosophy. When we started studying quantum mechanics in physics, there were many famously strange phenomena we were learning about that I was profoundly confused and fascinated by. I started taking a philosophy course on quantum physics, where I first heard about QC, a sub-field that lives at the intersection of physics and computer science.

In this class we discussed the philosophical underpinnings of several strange quantum phenomena (superposition, entanglement), and concurrently I was taking physics courses in quantum mechanics where I was learning a lot of the same rules and math that apply to QC.

How were you able to expand your knowledge of quantum outside of the classroom?

I did not exactly know what I wanted to do after college, and the summer was fast approaching so I needed to find an internship to do. I had previously worked in labs over the summer, but I was coming to terms with the fact that I did not love academia. I wanted to try my hand at something in private industry, but I did not want to abandon the subject of quantum mechanics that I had been spending more and more time thinking about. After hearing about QC in that philosophy class, I read online about the nascent QC industry; until then I had no idea that QC existed outside of academia and government labs.

Working in QC also requires some experience with programming, so I started slowly learning how to write code online while I applied to startups that were either building quantum computers or writing software for them. I finally got in touch with a software company called QC Ware, and they took a chance on me and offered me a summer internship for summer 2017.

Once we have large, full-scale quantum computers, they will be wildly disruptive and help to address some currently outstanding problems humanity has not been able to figure out yet.”

How did speaking at QC Ware NASA come about? What experiences led you to that moment?

After the school year ended, I flew out to California to work at QC Ware for the summer. I learned and practiced many practical day to day skills while working those months in CA and got some good programming experience under my belt. But that summer turned out to be a wild summer for me: July 2017 I was diagnosed with stage 4 non-Hodgkin’s lymphoma after getting an x-ray to check on some pain I’d been complaining about for a bit. This was of course a big shock to me and my family, and my girlfriend and her family (who were with me in California when we found out). I was very lucky to have a very understanding boss at QC Ware, whose own dad had experienced lymphoma.

I wrapped up the internship, and then took the fall quarter off from school as I stayed home and underwent chemotherapy treatment. Despite a rollercoaster half of a year, in a weird way, I am glad to have gotten a pause from the rush of college life; I had a lot of time to think about what I might want to do after college. During that half a year, I did not want to fall behind in school or my career, so I kept in touch with QC Ware and helped occasionally with projects they had. QC Ware was going to host a conference (Q2B ‘17) at NASA-Ames Research Center in Mountain View, CA in mid-December, and I was also slated to have my last two rounds of chemo in early and late December. My former boss graciously offered me the chance to give an intro-level talk between my last two rounds if I was up for it. I was. I flew out to California a few days after getting out of my chemo session and gave the talk. Though I felt all kinds of funny standing there with no hair (or even eyebrows at this point), I was grateful to my boss for the chance to do something I can be proud of looking back. Talking at that conference opened many doors for me in the very small QC ecosystem and solidified my interest in the subject when I went back to school in January 2018 and got back into the swing of things.

What do you think will be the future of quantum?

Quantum computing is in its early days. Right now, a few large companies and startups (like IBM and Google) have already built very small and noisy quantum computers. These machines are a way off from offering a performance advantage over conventional computers on commercially interesting tasks; but they’re already reaching sizes where they can solve certain totally useless and esoteric mathematical problems that even the most powerful supercomputers on Earth cannot solve.

Some large companies, and some smaller startups like the one I work at, PsiQuantum, are actively working on scaling up the size of these machines and figuring out what range of applications they could be used for in finance, chemistry, drug discovery, transportation, etc. I am optimistic about the progress happening across the whole field, and think it is likely we will start being able to harness these machines for useful tasks in the near future. Once we have large, full-scale quantum computers, they will be wildly disruptive and help to address some currently outstanding problems humanity has not been able to figure out yet. I am most excited by applications related to climate change, as these computers will allow us to simulate large molecules to a greater precision, helping us design new materials to use for more efficient solar cells and car batteries, which will ultimately be necessary to reduce our carbon footprint.

About the Contributor
Adri Cappello '21