How to organize a club fair during a pandemic 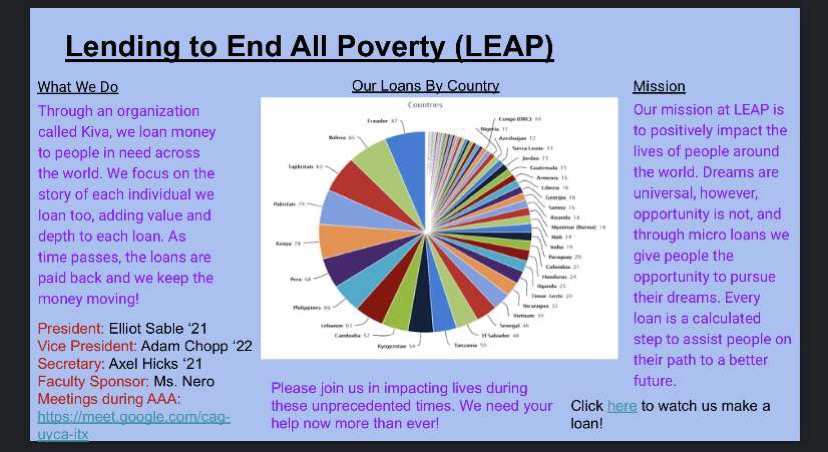 An example of a virtual poster from this year's Club Fair.

Between canceled summer internships and changing ACT dates, the one thing that has stayed constant for Ransom Everglades students throughout the COVID-19 crisis has been change. One major change for the student body was the virtual club fair. RE clubs are a cornerstone of how students interact with each other and the greater Miami community, making it crucial to figure out how to ensure that freshmen and new students would not miss out on participating. Because of health concerns, a traditional in-person club fair was out of the question, so instead the club fair was held over Google Meet.

Instead of having a physical booth and poster, the clubs made virtual posters on a shared Google Slides with information about their clubs for freshmen and new students. Freshmen could join Google Meet meetings linked to each club’s slide and interact with club leaders.

Ms. Carson thought the virtual club fair surpassed its in-person counterpart in some ways by giving students more time to think about their choices and discuss them with peers.

“By releasing the posters earlier, we had students getting on those posters before question and answer time, so it was different from what they’ve experienced before when we had students walking in with no idea. This allowed students to have conversations with their parents and their peers, take time to think it over, and then use that question and answer time in a meaningful way rather than feeling overwhelmed.”

Overall, the reception to the virtual fair was very positive. Raines Knight ‘24 described the virtual club fair as “very organized” and said that the virtual posters allowed him to “find a lot of information about each activity.” “I thought it was a great way to teach us and show us about the activities without wasting time during an assembly… especially considering the circumstances,” Knight ’24 said.

Elliot Sable ‘21, the president of L.E.A.P., a club dedicated to giving microloans to entrepreneurs in developing countries, saw a huge rise in membership this year, and said that the assembly “ended up exceeding most people’s expectations.” He found the virtual assembly to be easier to prepare for than the in-person one, but said that he liked “the in-person one better because we get to really interact with kids and they get to understand what we are all about.”

The extra freshman and new students proved to be a blessing and a curse during the virtual fair, as many club leaders were frustrated with the Google Meets and found themselves being accidentally interrupted by kids who joined at different times. Another common criticism of the virtual club fair was the order that clubs were presented. Many worried that the clubs that found themselves at the end of the slide show would be missed by freshmen and wouldn’t be given the same exposure as the clubs at the beginning of the slide show. It’s hard to quantify the effect this played in club selection, but the problem was an unavoidable part of the online format.

A common strategy used by club leaders and members was to try to reach out to freshmen independently. Jackson Mopsick ‘21, the secretary of Rock for Relief, said he “had to get [his] brother’s friends to recruit people.”

Overall, though, the reception of the virtual club fair was very positive.

“We got a lot of freshmen,” Sable ’21 said — even though they were not able to interact with those freshmen in person. “And I think they saw it as a club that they could help the world in and I think some people felt like they needed to help, that’s what some freshmen were telling me… our mission is more important now than ever.”