Poetry in a Time of Crisis

Rather than skipping a year, poets Kane Smego and Giddy Perez share their words and wisdom with RE students over Google Meet 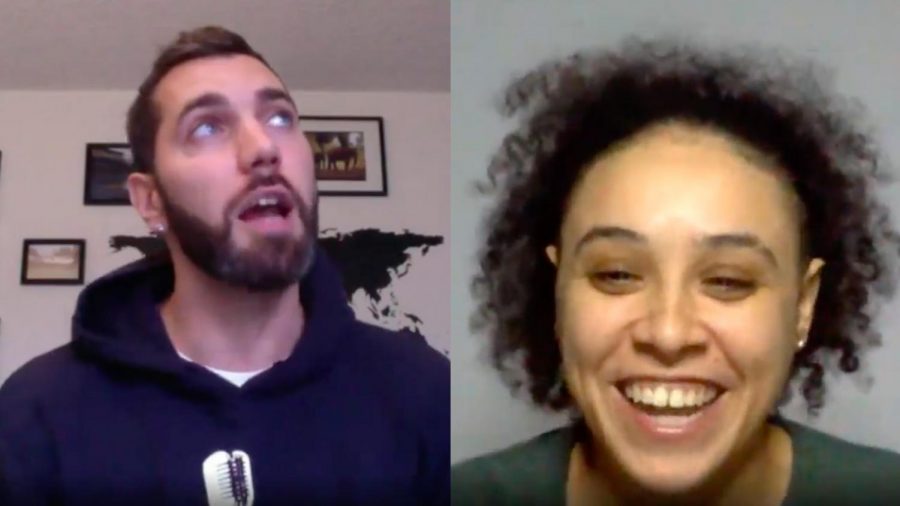 Kane Smego (left) and Giddy Perez (right) join the RE community once again, this time virtually

For the past five years, Ransom Everglades has counted on two poets to bring the community together: Giddy Perez and Kane Smego. Each spring, they’ve visited the school and made an effort to infuse the community with poetry, both through their workshops with the freshman class and in an assembly for the entire student body. Older RE students have fond memories of Perez’s ballad of the ever-present chancla, or of Smego’s hip-hop tale of growing up in a family divided between racism’s victims and perpetrators.

With a pandemic sweeping the globe this year, however, Kane and Giddy could not come to school in person. So the Ransom Everglades faculty and Poetry Club worked with Smego and Perez to bring their poetry online — an experience that brought some challenges, but also some comfort and inspiration to the many students struggling during quarantine.

Known as “Kane and Giddy” to the student body, Smego and Perez are an institution. Students eagerly await their assembly every year, and often praise them for making poetry relatable.

“They’re inspirational” says next year’s Poetry Club president Alexandra Prio-Touzet ‘21. “They manage to light up a room and help make everyone feel better.”

Each year, the duo work directly with the freshman class, devoting class periods to writing poetry and understanding how to express emotions that can seem too overwhelming for words. In doing so, they often help even the most disinterested freshmen understand the importance of creative writing.

“I very much remember enjoying their visit to my freshman class and getting a break from harkness discussions to read and write poetry, and loved listening to my peers’ work,” said Joshua Hertz ‘20.

In past assemblies, Smego and Perez brought their poetry to life through their actions, whether they were miming the dialing of a radio or throwing an imaginary shoe. This year, they couldn’t show that same physicality, so they focused entirely on doing whatever they could to convey the structure and emotions of a poem.

Performing during the stream “was like seeing a phantom audience,” Smego said, admitting that they felt just as strange about this situation as everyone else.

They kept their spirits high, however, and tried to bring as much animation and ardor as possible to the limited format. After delivering each poem — including Giddy’s famous ode to chanclas, Kane’s autobiographical piece, and some new material — they cheered each other on with snaps, claps, and reggaeton air horn sound effects. At the end of the assembly, they seemed visibly moved when a student with whom they had worked when she was a freshman, Poetry Club President Kareena Rudra ‘20, delivered a searing spoken-word piece called “In Which I Realize that I Do Not Have to be White to be Beautiful.”

After the assembly, Smego and Perez continued to teach the importance of poetry and self-expression to ninth-grade students during virtual classes. Thanks to the duo’s imaginative teaching methods, the students felt relief from their work, which has been harder to manage with the quarantine. Smego and Perez also ended their stay with a workshop on poetry and finding inspiration, aimed at helping students bring back the spark in their writing that they might have lost.

“I remembered how fun and easy it was to string your own meaningful sentences together to tell a story that I want to tell” said Megan Diston ‘21 about the workshop, adding that the poets’ infectious attitudes had helped her feel better about the situation.

Poetry Club member Maddy Bagnall ‘21 described her time with the duo as a “good way of working out worries and distancing yourself from [fears] a bit, to get a more third person point of view on them.”

Having such an outlet is perhaps more important than ever now, as students struggle with feelings of isolation and anxiety.

“[Poetry] is a way to present my feelings and write them all out. It’s a way to escape the reality of the situation,” said RE Alum and former Poetry Club Vice-President Zach Vuong ‘19. Zach gave credit to Smego and Perez for helping him develop a fierce love of poetry that persisted throughout his RE career and beyond. And the feeling is not one-sided: Smego talked about Zach’s first performance on stage and how inspirational it was to him. “It was a cool moment to see him rock the assembly and have everyone reflect that energy back at him,” he said.

Even as the circumstances of their visit have changed dramatically, Smego and Perez’ goal remains the same. “For the young people at Ransom, we just hope to offer poetry up as a tool for people to use however they need, whether it’s celebrating or having fun, or just getting by,” Smego said.