Opinion: LGBT+ history is our history 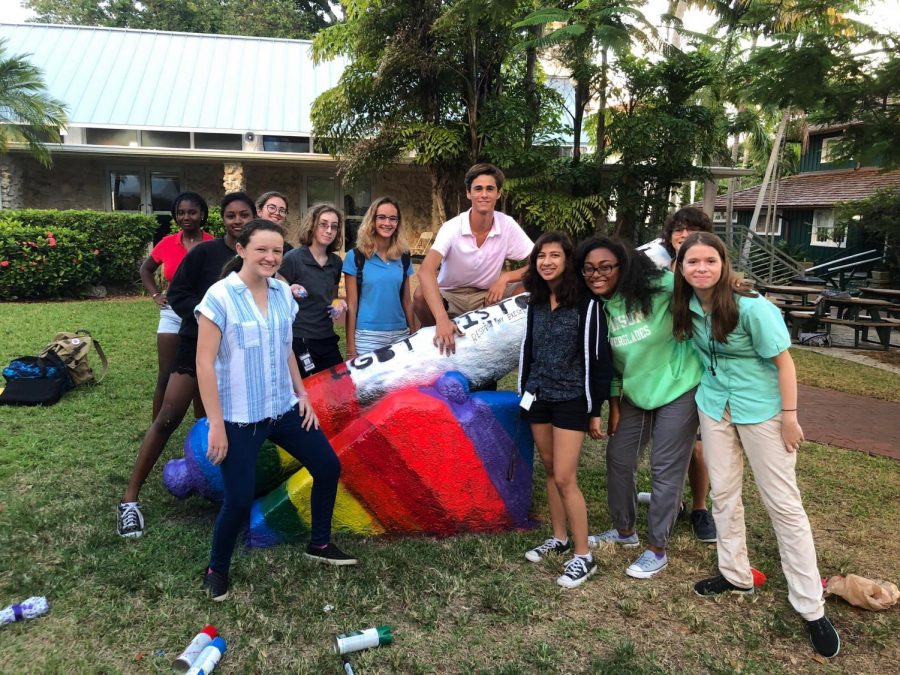 The RE Gender & Sexuality Association painted the cannon in honor of LGBT History Month.

Early in the morning on June 28th, 1969, police raided a New York City gay bar known as the Stonewall Inn and sparked a violent conflict between themselves and the bar’s patrons. This conflict grew to be known as “Stonewall,” and it is one of the most important events in American LGBT+ history.

However, Stonewall and other LGBT+ related events remain under-discussed in academic environments. Many schools, including Ransom Everglades, put minimal focus on LGBT+ history compared to other minority groups. This imbalance leaves LGBT+ students underrepresented in the curriculum and allows many students to be unaware of an important historical perspective. Including a more diverse history would potentially combat stigma, initiate important conversations, and validate LGBT+ students. For the benefit of both LGBT+ and non-LGBT+ students, Ransom Everglades should offer courses that are more inclusive and educational regarding the LGBT+ community.

The current lack of education about the community can be traced back to the texts students study. “The textbook makers are trying to appeal to a lot of different communities, and curriculum is oftentimes a politically charged thing,” said Dr. Jonathan Scholl, RE’s History Coordinator.

Dr. Scholl explained that textbook companies are prone to including and excluding material as they see fit to cater to a wider clientele, which is a potential reason why Stonewall and other LGBT+ historical events are not major points of discussion.

Using a newer, more inclusive textbook or using different sources outside of this school-issued textbook would combat a lack of education on the subject. This incorporation could help promote tolerance on campus.

Understanding the history of discrimination and the extent to which the LGBT+ community has both suffered and struggled for their rights may also dissuade students from using offensive terminology. “What makes you stop being a homophobe is your own experience,” said RE English teacher Mr. Mike Townsend.

Learning context and presenting a respectful context where peers can share their experiences and thoughts would allow for meaningful conversation on both current and past events.

Being LGBT+ is neither a mental defect nor a novelty of the modern era; it is a perfectly natural characteristic that has been around, though often concealed, for thousands of years. “People don’t really understand that this isn’t a social thing; this isn’t a new thing, this has been happening for years,” Kathleen Stanton-Sharpless, ‘20, said. ”If we taught history about it, people would probably be like ‘Oh, so it isn’t just something people do to seem cool.’”

Making a more extensive effort to teach LGBT+ history could combat a lot of the ignorance that surrounds the community and validate those inside it. The explosion of the current fight for LGBT+ rights is not a millennial invention for attention or anything of the sort. It is a fight for equal rights and well-deserved respect.

As RE works to achieve a more inclusive environment in other ways, the school’s administration must be mindful of the fact that curriculum plays an enormous role in fostering or limiting inclusivity. “It’s a matter of creating a curriculum — which is a very involved process — that can responsibly present this information to students,” said Ms. Carla Hill, RE’s new Director of Inclusion and Community Engagement. “I believe that Ransom Everglades would want to make sure that the instructor and curriculum meets the high expectations the school is known for.”

As RE moves forward, especially with the addition of Ms. Hill’s role, there is hope for change. But when aiming to change the future, it is crucial to thoroughly examine the past. LGBT+ rights still have a long way to go; perhaps the missing key to progress is the lack of education regarding what has already happened. Mr. Laughlin, an RE faculty member who served as sponsor of the GSA earlier this year, worded it best: “In order to learn from the past and progress, we need to know what the past is.”