Leader in education, DEI, and student life to head the Upper School 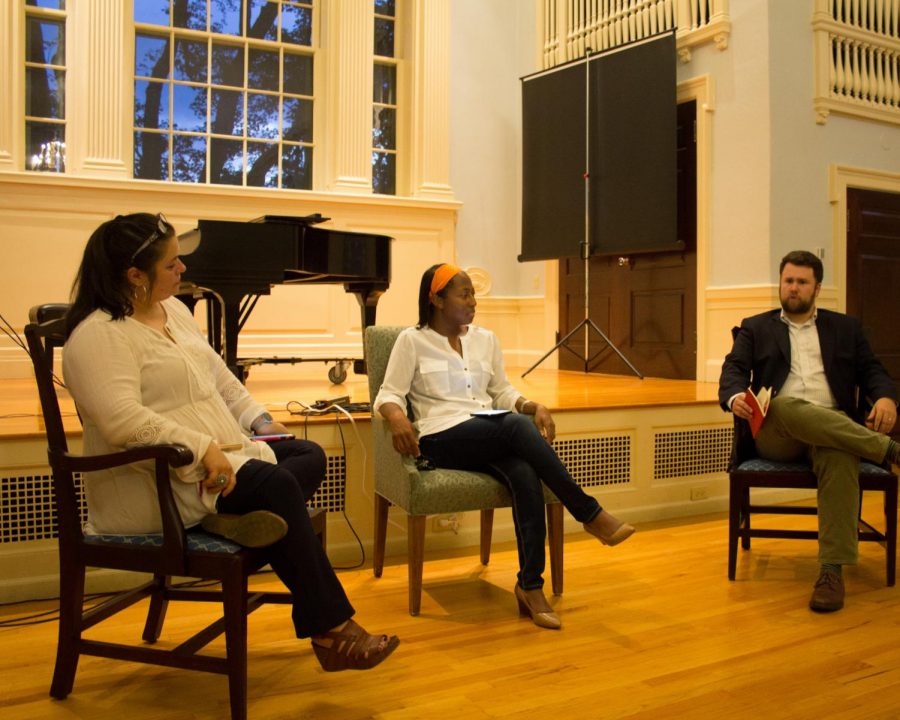 Ms. Patricia Sasser, center, participates in a panel discussion with faculty and students at Loomis Chaffee following the race-related protests and violence that occurred in Charlottesville, Va., in 2017.

An “authentic and dynamic” Emmy-winning producer and experienced independent school dean will be taking the reins of the Upper School next year, as Head of the Upper School Mr. Ken Mills heads to the Caribbean for a new professional adventure of his own.

Ms. Patricia Sasser, currently the Dean of Students at the Loomis-Chafee School in Connecticut, will be taking over for Mr. Mills starting in July. After seven years in Miami, Mr. Mills is leaving to become the Head of the Gifft Hill School in St. John, U.S. Virgin Islands.

Ms. Sasser was hired at the end of a nationwide search, and she accepted the position in February.

The Head of the Upper School is a position that requires leadership skills to effectively manage many areas and people. The rough description of the position, according to Mr. Mills, is “to work with faculty, students, and parents, and to plan.”

When asked what the most challenging part of his job was, Mr. Mills said, “Being able to put big plans into motion. You need to be able to plan ahead in this job and [have] a vision for where to go.”

He maintained, however, that “it’s a very rewarding job,” adding that “working with colleagues and with students in a way that provides a great education and opportunities for young people [is why] I get out of bed in the morning.”

Ms. Sasser was chosen after several rounds of interviews with a search committee comprised of members of the faculty and administration. In the final rounds of the interview, several students were asked to meet with Ms. Sasser, as well.

Dr. Doug Heller, who served on the search committee, said that he was looking for “a people person” who can “speak for students, listen to them, and manage well in terms of budget and hiring.”

Alex Mendelson ’19, who met with Ms. Sasser while she was a candidate, agreed with Dr. Heller that he was looking for “strong interaction with students,” and that the new Upper School Head should have an initiative to advance new projects.

Juanchi Roca-Paisley ’19, who was also part of the student interview group, said he would like to see a closer relationship between the administration and students.

Everyone “has a trusted teacher, but not everyone has a trusted administrator,” Roca-Paisley said. He believed he saw these qualities in Ms. Sasser, and noted that at her current job, she meets with every student she oversees at the beginning of the year, in order to make sure that “the first conversation she has with them is not the ‘bad one.’”

Head of School Mrs. Penny Townsend also noted that Ms. Sasser is “not an administrator” in the more traditional sense, and that she was particularly excited by Ms. Sasser’s unique background.

Prior to her work in education, Ms. Sasser was an Emmy award-winning associate producer for ESPN, and worked in both live and post production for a multitude of sports from 1999-2006. She was nominated twice for an Emmy Award, and she won in 2006 for Outstanding Live Event Turnaround, for her work on the Winter X Games production team.

The skills Ms. Sasser said she gained from that position include “thinking on your feet, being in tricky, fast-paced situations, and how to have a tough skin . . . but also how to take feedback to do better and grow.”

Dean of Students Ms. Lindsay Danielson agreed that this was an important set of skills for an incoming Upper School Head. “She can think on her feet and make decisions quickly,” Danielson said.

In her current role at Loomis-Chafee, Ms. Sasser works closely with the Director of Diversity and Inclusion to manage professional development of these factors within students and faculty. Prior to coming to Loomis-Chaffee, she worked at the Madeira School in Fairfax, Virginia. Her roles there ranged from Major Gifts Officer, to Director of Student Activities, to the Assistant Dean of Students and Special Assistant to the Head of School on diversity.

She also has significant volunteer experience on various boards for arts education and as an editorial board member of “DiversityIS,” which is a magazine that highlights the efforts of public schools to raise their levels of inclusion and equity. Ms. Sasser said that she hopes her experience with issues of diversity and inclusion will allow her to communicate with the students at RE with enhanced insight into their backgrounds.

“Everyone has a story. You can learn a lot from it and it can break barriers,” Ms. Sasser said. “I try to make a commitment to know everyone, to know their names and let them know that they are more than numbers on a transcript. . . . I want them to know that when they make a misstep, that that is not how I define them.”

This background was part of what made her an especially appealing candidate to Dr. Heller. “There was one question we asked about diversity, equity, and inclusion — her response was the most thorough and it showed that she had the most experience there,” he said.

As Ms. Sasser takes over in July, certain aspects of the position will be “tweaked,” according to Mr. Mills, and Mrs. Townsend confirmed that some administrative responsibilities will be moved around, due to how busy the offices get.

Specifically, Mrs. Townsend said that Mrs. Sasser will be coming more from “a student perspective,” leaving Ms. Danielson to work more closely with her.

“She has the same approach to things as Ms. Danielson,” Mrs. Townsend said. “She’s very focused on the student experience. . . . She oversees all aspects of the kids’ lives, and she’s a really good relationship builder.”

Ms. Danielson, who said that she has to work with or meet with the Head of the Upper School every day, said she was “very excited for her enthusiasm. . . . I think she brings a lot of positive energy . . . and a very fresh perspective that I think will serve all of the members of our community well — not just the students but also the faculty and staff.”

Dr. Heller also praised Ms. Sasser’s “authenticity [and] dynamic nature. . . . She’s really caring but at the same time someone who can be strict when she needs to be.”

As for her personal life, Mrs. Sasser loves to travel, watch movies with her son, and watch volleyball. She also loves to read, and “tries to blog.” Service and giving back to her community are equally important and enjoyable to her.

She is currently part of a board called Arts for Learning Connecticut, which makes arts of all kind more accessible to schools, community areas, and programs that do not have the funding to provide them to the students. She said that although she is not an artist, she recognizes the important role of the arts in helping a community thrive.

Mr. Mills lamented the fact that he will miss the growth of RE, especially the completion of the new STEM building. More importantly, he will miss the students and the experience of working with them. But he is confident, he said, that the Upper School will be in good hands.

“She has a different skill set than I do,” he said about Ms. Sasser, “and I think she will put those skills to good use here.”