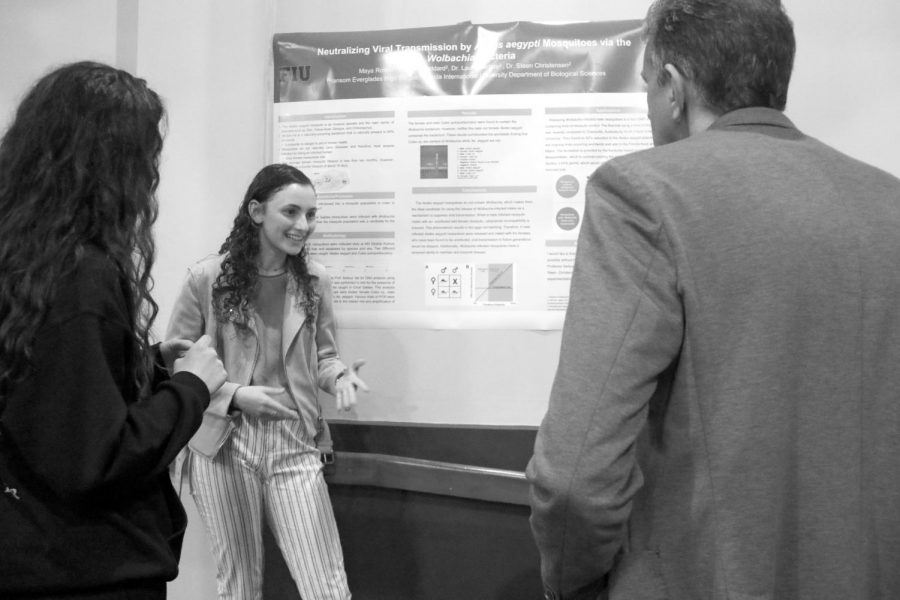 Maya Rosen ’21 speaks to guests at the internship forum about her work studying viral transmission among mosquitoes.

It’s not every day that a Ransom Everglades student gets the opportunity to speak with a state prosecutor about the assault and battery cases involving XXXTentacion, an infamous rapper who was murdered in Deerfield Beach last June. But for Matias Calle ’19, this was just another day at his summer internship — and an unforgettable one.

“It was really interesting to see how the prosecutor was dealing with his murder while there was so much drama surrounding his case,” Calle said.

Like fellow RE student Addy Weintraub ’20, Calle completed an internship at the State Attorney’s Office (SAO) this year, joining a cohort of fellow RE students who took advantage of internships in many different fields to learn in a unique environment and gain insight into possible careers.

Although RE students have always sought internships, the relatively recent creation of the annual internship forum has helped to increase the visibility of these opportunities.

According to Mr. Paul Natland ’02, who helped to create the internship forum in 2014, the forum provides a venue for students to share information about the internships they have completed, and to encourage others to participate in those internships. In recent years, companies and other businesses have also come to share the work they offer to people looking for an internship.

“I wanted to try and promote this more hands-on, experiential component of learning that is so important,” said Mr. Natland. “Obviously, what you learn in class is very important, but when you’re trying to learn what you want to do with your life — that is, what kind of fields you might want to study in — then doing these internships can give you a sense of what that’s like.”

It is that experiential process that makes internships engaging, Mr. Natland said. He emphasized how he saw internships help students to develop new skills. They were “so much more organized, self-motivated, more set on what they wanted to do, and even more confident.”

Weintraub said that her internship at the State Attorney’s Office gave her real-world experiences that would be impossible to duplicate in the classroom.

While working at the SAO, Weintraub went to court, read case files, organized materials for upcoming trials, and even helped in the process of determining whether a defendant had a fair trial or not.

“It was really cool to be with [the State Attorney] and follow her,” she said, “and I got to see court from a more in-depth perspective, watching plea bargains and a lot of that type of stuff.” She described her internship as “educational, eye-opening, and impactful.”

During his internship at the SAO, Calle not only had the opportunity to observe criminal trials and the overall work of prosecutors — including “a very intense cross-examination in court dealing with a DUI Manslaughter” — but also worked in the office of the spokeswoman for the Hispanic community, which helps connect the Hispanic community with the work of the SAO. As part of the Community Outreach Division of the office, Calle helped in involving these members of the community while offering aid at press conferences, interviews, events, and more.

In a very different setting, Abby Sekoff ’20 spent the last two summers interning at South Miami Vet and Pets, under the direction of Dr. Maria Diaz and Dr. Maria Acevedo, who are actually Sekoff’s own dog’s veterinarians.

One day, while at the office with her dog, Sekoff inquired about doing an internship with the vets. During the summer, Sekoff was responsible for a sizable amount of work around the office, from preparing medications and administering shots to answering the phones when the office gets too busy — responsibilities that have carried forward into the year when the vets need more help.

“They make me feel like part of the team,” she said.

Calle reported feeling a much greater sense of what he wants to do after high school, and Sekoff agreed. She has always been interested in working with animals, and she said that her work at the vet’s office revealed a more certain career interest.

“I know a little clearer now that I want to pursue animal science,” Sekoff said, “and overall I feel like I know so much more now, that I feel like I’m ready for the next step.”