As Ransom Everglades looks ahead, students and faculty feel the impact 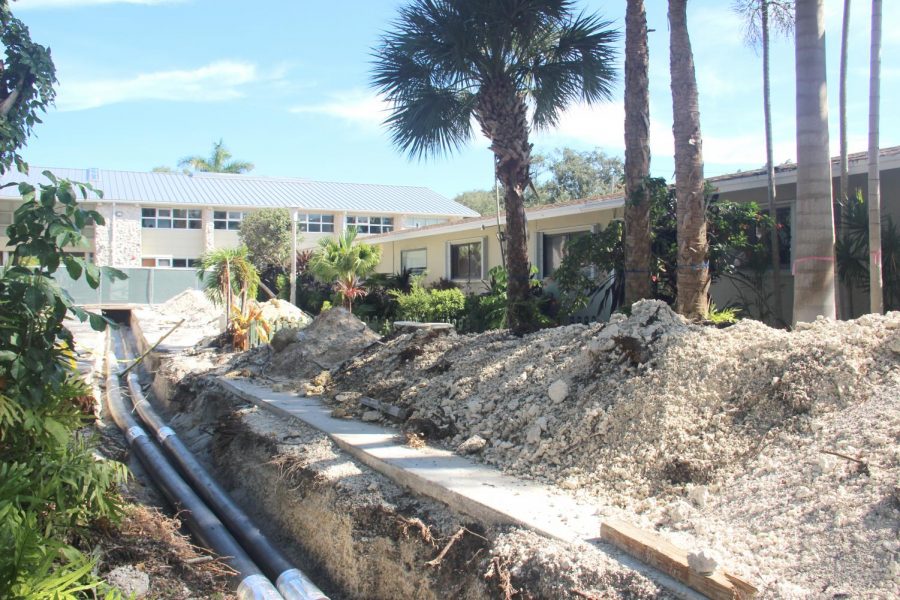 Trenches and rubble have become a familiar campus sight.

From eating up precious parking spaces to demolishing old buildings, the construction of the new STEM center at Ransom Everglades has certainly had an impact on the opening of the 2018-19 school year.

While the construction affects all students in one way or another, seniors have been particularly affected, as they have lost half of their parking spots and now share each spot with a partner. Henry Schermerhorn ’19, president of the Student Government Association, agreed that this created an “inconvenient” situation, especially given the reality that “all of the other senior classes had their own parking spots.”

However, Schermerhorn said he appreciated the administration’s handling of the matter: “They’re concerned about students. . . They did they best they could out of the situation.” He mentioned that he had proposed some possible solutions for seniors who now have to park off campus, such as coupons for the Coconut Grove Playhouse, a nearby lot.

Schermerhorn emphasized that he believed RE is making a good investment for future students, even if it means a few years of relative discomfort. He said he is excited about the Admissions Office moving into the recently acquired La Brisa property, as well as the expansion of RE facilities, such as the STEM building, which will have the potential to attract and support more students.

Other students echoed the feeling of inconvenience, which is compounded by the fact that there is no place for parents to line up properly to wait for their students, and more students walking off campus for their cars means more back-ups at the crosswalks.

However, Head of School Ms. Penny Townsend noted that inconveniences like this are inherent in any construction project, and many of the decisions regarding the timing of some aspects of the project were out of the school’s hands.

“The first thing you have to understand is that we are in a huge permitting process with the City of Miami,” she said. Therefore, even if the school is ready to proceed, it is often at the mercy of the city.

The construction has also had an impact on faculty, several of whom had to find new daycare options for their children, after the RE daycare center closed. Others have had to relocate office spaces. Some of the most notable moves have included the relocation of the College Counseling office to the Pagoda, as well as temporary moves from Cameron Hall into the library, a space that now houses several administrative staff.

When asked about what it was like to move her office into the Library, Mrs. Sandra Lacayo, Assistant to the Dean of Students, struck a positive tone. “We made it very smooth. We packed everything in three days, and we were ready to roll when they asked us to.”

Ms. Lacayo also added that working out of the Library carries certain perks. “The students have made it very pleasant. We respect each other’s space, and we feel like we are going to miss the students when we move back.” And Ms. Monique Regis, Main Office Coordinator, added that they feel even more productive in the Library’s lively atmosphere.

Cameron will also soon be the new home to the Technology Department, which is moving out of Timken Hall. As the ambitious construction project begins to take shape, it leaves behind Timken, a building dating from 1959 that Mr. Becker, a longtime math teacher who taught there, seemed to cherish.

“I loved teaching in Timken. It was my favorite spot on campus,” he said. “It was nice and quiet over there. We didn’t get any bystanders, or people who didn’t belong there.”

Although Mr. Becker claimed that he is not someone who tends to like change, and this process is very difficult for everyone on campus, he said that he cannot wait for the “state-of-the-art math [and] science building. But in the meantime we will just have to do the best we can.” Mr. Becker noted that he was excited for the new technology hookups, the high-speed internet, and the modern classrooms with movable desks and chairs that the new STEM building will provide.

Mr. Greg Pollard, Director of Advancement, has been working closely with Ms. Townsend to help raise money to finance the project. He manages parent and alumni fundraising and serves as the liaison for board fundraising as well.

Mr. Pollard explained that although there was a campus master plan in 2014 under the former Head of School, Ellen Moceri, fundraising on the project started with Ms. Townsend’s initiatives when she came to RE. He said the project gained traction because “the school’s great academic space needed infusion. These buildings hadn’t been touched in over forty years.”

Mr. Pollard also emphasized how old the current buildings are. “The buildings were built at a time when the school was one-third of the size [it is today], when it was the Ransom School for boys. . . . There was a desperate need for space,” he said. “What was needed was to get students the tools they needed in this 21st century environment.”

When asked about the financial support this project has received, he explained that the school has raised all of the money needed for the project, instead of borrowing money. Donations were received from parents and alumni, but the project has been financed mostly through the generosity of the Board of Trustees, which has been highly supportive from the beginning. The project is fully funded, but money is still being raised. This new money will assist with future building projects.

“There are plans to redo all of the academic spaces on campus,” said Ms. Townsend. In fact, architects have already completed assessments evaluating logistics future projects, such as the construction of a new Ludington Hall.

Though Mrs. Townsend said it is never easy to predict how long the permitting process will take, she said that the school is currently focused on getting approval to take down the remaining one-story buildings, such as the Parents’ Association and Advancement Office houses, and it will soon begin work on new driveways and car routes. Ms. Townsend said she was hopeful that once construction started on the new STEM building, it would be a 12-month process, assuming all goes well.

According to Ms. Townsend, plans for the STEM building have taken into account the fact that it will be a modern building on a more distinctively historic campus, with its signature coral walls and buildings like the Ransom Cottage and Pagoda.

The Ransom Everglades aesthetic is already quite diversified, she said, with modern buildings like the Art Gallery and the Lewis Family Auditorium contrasted against the more historical structures. Although the STEM building will be “a stand-alone, high-tech building,” she said, “it will [also] have some coral and some finishing touches, such as wood — it will blend in.”

Furthermore, Ms. Townsend said that the addition of the La Brisa property makes the campus much greener. Pointing out the window of her office, she said, “This cement here is going away, so part of [the project] is a greening of the campus, which is really nice for the students.”

The creation of new collaborative spaces is a major focus in all of these new projects, as is already evident from the renovation of the second floor of Cameron Hall. This will include several new air-conditioned common spaces, which are currently in short supply. For example, during a tour by Ms. Townsend of the La Brisa property, she guided reporters into a small room, which is being envisioned as a quiet study space for students.

“I’m just excited to give you the spaces you need to really soar,” Ms. Townsend said. “If you have the right spaces you really can have a creative schedule. I think you all will like scholarly places to collaborate and work in. I think it’s actually going to improve the learning environment.”