‘In a Classroom All His Own’ 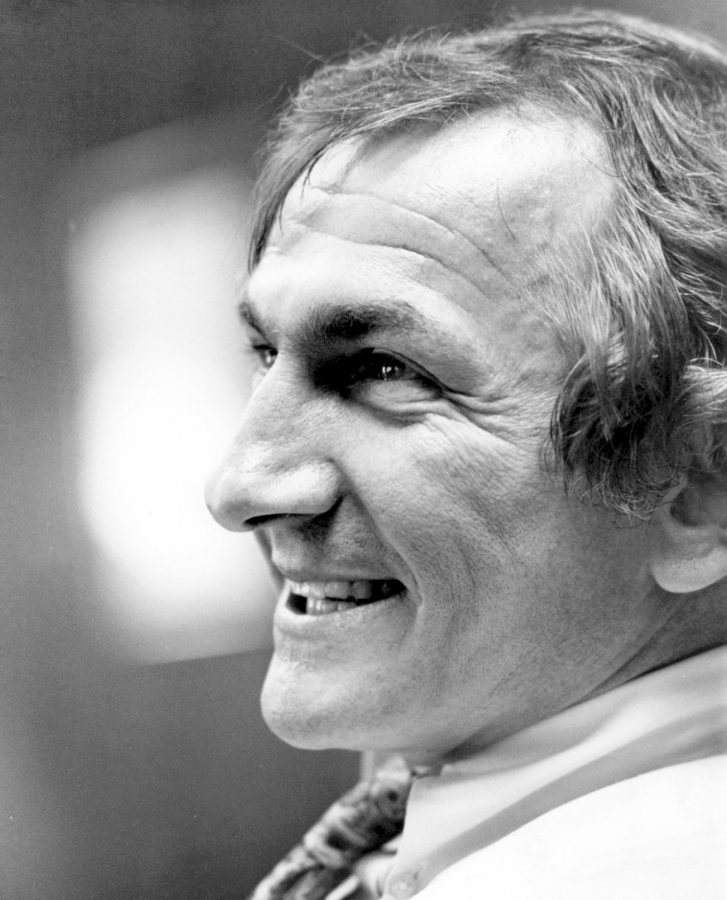 “I never intended to marry Ransom School, but I did. It just happened,” said Dan Leslie Bowden, who passed away on September 14 at the age of 89. “This school has in many ways given me an identity.”

In more ways than he knew he gave the school an identity as well. Over his 63 years with Ransom Everglades, he touched thousands of students’ and faculty members’ lives as a treasured English teacher, college counselor, and advisor to the Head of School.

To the current student body, Mr. Bowden is known best for the library that holds his name, but it is his character and personality that are worth remembering. Born in Columbus, Georgia, a 28-year-old Mr. Bowden was convinced by headmaster Pete Cameron to come teach English at the Ransom School in 1955. From then on “this frenetic force of nature” never left, as James Beverly ’62 said. Mr. Bowden continued to teach until 1999 and served as an advisor to the school since then. Beverly’s comments were among many posted to the online tribute page set up by the school after Mr. Bowden’s death.

For anyone who had the pleasure of hearing Mr. Bowden speak, whether during one of his occasional visits to the campus or at his annual Christmas reading, it is quickly apparent why his personality is so hard to forget. His thick southern drawl and the theatrics he brought to any story were memorable. But it was his desire and unique ability as a teacher “to look in your eyes and see I have connected with you” — as James McGhee II ’78 quoted Mr. Bowden on the tribute page — that truly set him apart.

To the many Ransom alumni who went through his classes, Mr. Bowden was the incredibly rare teacher whose lessons and personality stuck with them for life. It is a testament to his teaching that all Bowden alums seem to still remember the Shakespeare memorized in their class decades ago, and almost universally believe that despite the rigor of the course, “this was the class that we all looked forward to,” as Jon Engle ’66 said in his tribute.

In celebration of Mr. Bowden’s 60th year at RE, Jeff Lindsay ’70, the author of the “Dexter” novels, wrote a tribute to Mr. Bowden in the RE Log. In that piece, he spoke about his first essay written for Mr. Bowden’s English class, in which Lindsay wrote that his ambition as an author was “to emulate the verbiage of the great writers.” In the margin, Mr. Bowden simply wrote, “One mustn’t.”

In her own piece in the RE Log celebrating Mr. Bowden’s 60th year at RE, Head of School Ms. Penny Townsend wrote that “even in our fast-changing era . . . we still need Dan Leslie Bowdens.” A school should always seek the most knowledgeable and inspiring educators, such as Mr. Bowden, but still one mustn’t seek to simply emulate the greats. Mr. Bowden was inimitable.

It was not only Mr. Bowden’s remarkable memory that made students feel like they were individually cherished and loved — he was known not only for being able to recite lengthy Emily Dickinson poems at the drop of a hat as well as for remembering a student’s entire family history decades after they’d graduated — but it was also his actions in and out of the classroom.

“Dan did not merely teach a subject,” wrote Lindsay. “He lived it — dramatically, even flamboyantly, with a passion and clarity and command of the material that was usually awe-inspiring.”

Gloria Johnson Goins ’81 was one of the few African American students attending Ransom Everglades in the late 1970s, who “aside from my immediate family . . . didn’t have many living African American role models.” As she wrote in the RE Log, she recalls walking through the Breezeway one day in 1978 when Mr. Bowden “grabbed my hand and boldly announced: ‘I have received permission from the school to take you to see Ms. Maya Angelou!’” She didn’t know who Maya Angelou was at the moment, but soon she’d be in an auditorium with Mr. Bowden listening to Angelou speak.

Goins was awestruck, and the next thing she knew Mr. Bowden had pushed his way through the after-show crowd and was introducing her to the great American poet.  She said that “for once, I started to believe that maybe, just maybe, I too could be a brown embodiment of elegance, radiance, and brilliance.”

Through his classes and through these countless opportunities he gave to his students out of love, Mr. Bowden’s effect on his students was life-changing. Not only did he embody the school’s ideals, he raised them to an even higher level.

Charles Sands ’61 wrote that out of all of the professors he’s ever had there has been “nobody like Dan. Bowden was in a classroom all his own. He could teach. Everyone that went through his class came out a better person.”

A Celebration of Life for Mr. Bowden will be held at 10:30 a.m. on October 15 in the Lewis Family Auditorium.