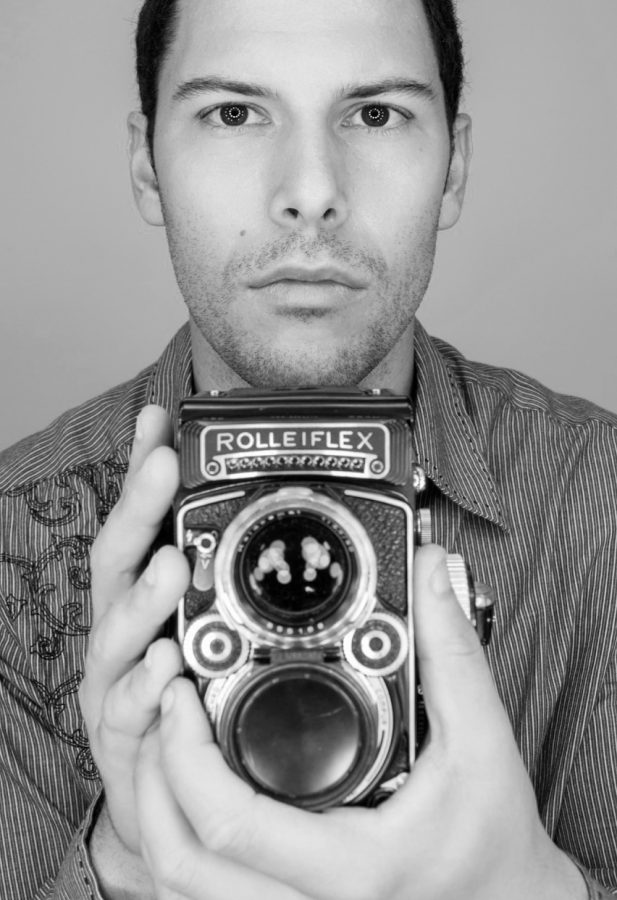 Mr. Stock's self-portrait using a ring light is featured on his website.

Mr. Matt Stock is more than your average high school photography teacher. He has been an important part of the Ransom community for more than 10 years now, inspiring his students every day with tales of shooting in the Everglades and of his own artistic path to becoming a conservation photographer: someone who strives to document the world’s cultural, historical, and natural riches in an effort to preserve them forever.

According to Mr. Stock, this journey began in elementary school, when he won an art award for a watercolor painting of a National Geographic photograph. This was the moment that he fell in love with photography and began to crave adventure. He was ready to experience new things and document them for posterity.

Mr. Stock was encouraged by many to follow a more “classical” career path, and when applying to college, he got accepted into the medical school at the University of Miami directly from his high school. Nevertheless, he would spend hours in the darkroom, and photography developed from a hobby into his calling. So he decided to attend the Miami Ad School and major in photography, following his true passion.

As Mr. Stock spoke about at his TEDxCoconutGrove talk in 2012, he is “fascinated by light.” This led to the development, as he describes on his website, of his style of “Painting with Light in the Dark.”

This process is similar to “…sculpting with darkness as a medium,” he explains. “I chip away the shadows to reveal light and dimension the way a sculptor chips away at a block of marble to reveal the sculpture within.”

Recently, Mr. Stock has been working on a personal project called “Abandoned Vehicles of the Everglades,” in which he is documenting decades of every possible vehicle type in the greater Everglades watershed, from the Ford Model A, to Volkswagen buses, to 1930’s bulldozers; he has yet to photograph a motorcycle and train. His aim to preserve the cultural, historical, and natural in the world is evident from this project, as he captures such unique photographs and moments of these vehicles that have been left in the Everglades, unbeknownst to many.

Due to the difficulty of finding these vehicles in between the mangroves and marshes of the site, this project has proven to be quite long-term. This project led to Mr. Stock’s new research project “The History of Miami,” in association with the Smithsonian-affiliated museum of Miami’s history. The main goal of this project is to record and document the history and way of life of the men and women of the Everglades, so as to preserve this part of South Florida history, before this first generation of “Glades people” completely disappears.

In the process of documenting their lives, Mr. Stock has interacted with and even formed lasting friendships with these people of the Everglades. He is actually working on a new book that is planned to be released in 2019, in which he is able to tell the tales of the people he met through the lens of his camera.

Along the way, Mr. Stock also learned how to balance his artistic work with a full-time teaching job at RE, bringing new ideas and projects to his Introductory Photo, Natural Light, Portraiture, and Experimental Photography students every day. One example of Mr. Stock’s creative projects for his Natural Light class is HDR photography: students learn how to capture greater detail from the bright and dark areas of the shot by combining multiple exposures. The next step is then editing the different shots from the same scene into one panoramic photo of the scene.

Another project that Mr. Stock does every year in his Portraiture class is the “Stranger” project, which involves taking his students for a class trip along the sidewalks of the Grove and allowing them to capture all the different types of people that are seen in the area, using the techniques that he has taught.

Fueled by his students’ enthusiasm for new shooting techniques and ideas, Mr. Stock loves to show his students his current projects, too. Mr. Stock said he believes it is his duty, as a photography instructor, to make the artistic process less intimidating, and to share his experiences and expertise in the production of professional works. He also made it clear that although he enjoys being able to work with galleries, he loves spending his time with his students and teaching the art.

“I like how he is open-minded in terms of the artistic pursuits of his students, by allowing them to take his techniques and apply them in any creative direction,” said Ana Sannia ’20. Sannia has been taking photography with Mr. Stock since freshman year; she has taken his Introductory Photo and Natural Light classes and is currently in his Experimental Photography course.

Yara Haddad ’22, who is currently enrolled in the introductory course, attested to another of Mr. Stock’s teaching styles: “He gives constructive criticism, which allows us to really begin to grow as photographers, considering most of us have never really learned the techniques to shooting pictures or editing them on the computer.”

Additionally, both claim to have become inspired to go the extra mile when shooting their pictures, thanks to the stories of his crazy adventures to get one single shot — and because of the results, too.

When asked to explain some of his daring photographic journeys, Mr. Stock told of the first time that he photographed lightning back in 2015: “I was watching the storm and kind of tracking where it was going, visually, and timing the lightning strikes on my watch so I knew about their frequency.”

“I set up my tripod to intercept the storm, which was about a quarter of a mile away, and nature cooperated, everything lined up, and I mean the sky just lit up. . . . But [the lightning storm] was right on top of us, and we were in a pine forest, so not the safest thing in the world.”

Aside from entertaining his students with such thrilling adventures, Mr. Stock also has a love of puns. “Even though I cringe at his horrible puns, I know one day I’ll miss them,” said Sannia.

About all of his adventures, Mr. Stock had a simple explanation: “It’s where everything makes sense, with the camera in hand.”