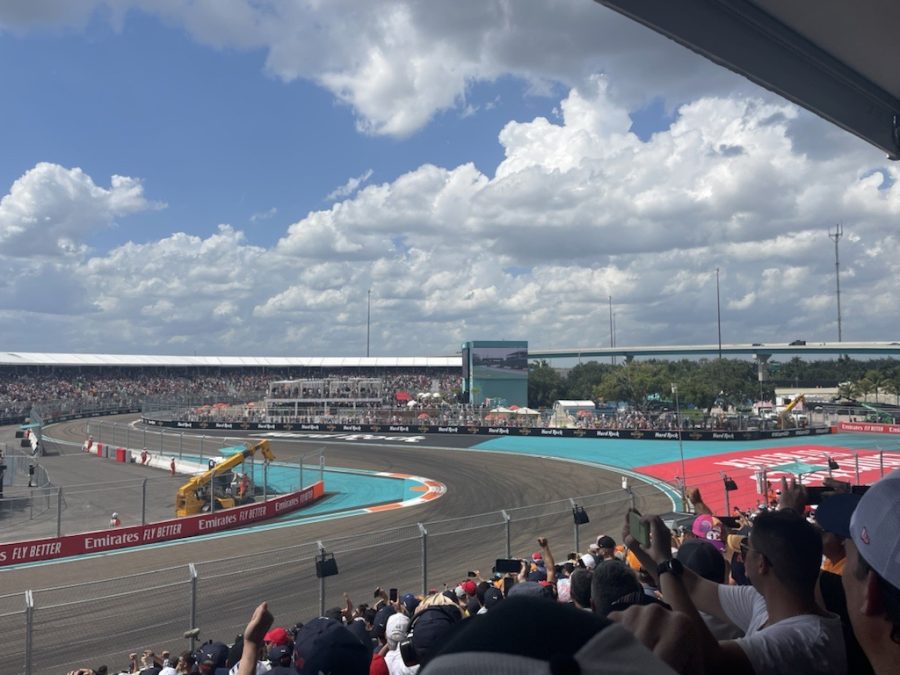 A view of the track courtesy of Mikey Zoi '24, who attended the Miami Grand Prix.

On May 8, 2022, Miami experienced the excitement, glitz and glamour of Formula 1 racing. Celebrities and even former First Lady Michelle Obama joined thousands of spectators who flocked to Hard Rock Stadium to experience an event that, since its inception in 1950, has attracted generations of fans to exotic locations around the globe, including Monaco, England and Italy.

However, it is fair to say that many in the crowd had little familiarity with the world of Formula 1 car racing. Unlike in Europe, where the popularity of F1 race car drivers is tantamount to that of famous sports figures, in the United States, most Americans have minimal familiarity with the icons of this engine-driven sport. Make no mistake, however: F1 Racing is a global phenomenon whose popularity trumps that of NASCAR many times over.

What is the difference between Formula 1 and NASCAR? Unlike NASCAR, Formula 1 is associated with numerous luxury car companies such as Ferrari, Aston Martin, and McLaren. Teams do not develop their own cars in NASCAR, as NASCAR provides the cars. However, in Formula 1, individual teams spend months and hundreds of millions of dollars each year developing every aerodynamic, durability, and powertrain specification to gain just one-hundredth of a second over their competitors. F1 is seen by many as the pinnacle of motorsports, with a sense of prestige that exceeds that of NASCAR. This is partly because F1 cars are the fastest circuit cars on Earth, and drivers must maneuver shorter tracks with sharper corners than those in NASCAR racing. As a result, those who excel in F1 racing, such as Lewis Hamilton and Max Verstappen, are considered the top drivers in the world, sometimes earning up to 40 million dollars per year.

Despite being viewed as the premier international racing series compared to NASCAR’s solely national appeal, F1 has always been a Euro-centric racing series. In fact, during the 2021 season, only one of the planned twenty-three races was in the United States. Throughout F1’s lengthy history, there have been few American drivers. The last driver to race who was from the United States competed in 2015!

The overall lack of interest amongst fans in the U.S. can be explained by both the limited exposure of the sport to American audiences and the high cost of attending a race. Other sports, such as football and basketball, dominate U.S. viewership, and tickets for F1 races can average about $3000. Unless it is the Super Bowl, very few Americans are willing to pay that price for any spectator sport.

Additionally, for aspiring drivers, F1 has a much higher barrier to entry than any other sport. To become an F1 driver, you need one thing: money. Lots and lots of money. Drivers realize this necessity early on; most start racing competitively in Go-Karts, and often, even a go-kart can cost up to $2500. Compared to a $30 basketball, the sport is not exactly affordable.

In 2017, F1 began implementing a new marketing push to expand its market to the United States and younger generations. After the 2017 season, the racing series released its first season of “Drive to Survive,” a Netflix documentary following the lives of all 20 F1 drivers throughout the season. This show gave a much-needed increase in popularity to the sport. Along the way, it allowed F1 to gain a significant fanbase in America.

With the show nearing its fifth season, Formula 1 has made it clear that its goal is to increase the number of American races, starting with this month’s race in Miami. Their gamble clearly worked: at the sold-out Miami Grand Prix, the crowd stood shoulder to shoulder in the blistering heat, hoping to catch a glimpse of the cars carefully maneuvering 19 corners of sharp turns at speeds up to 200 miles an hour.

The Grand Prix was not just a success at drawing crowds; it also boosted the sales of local vendors who sold food and other products to attendees of the event. Elliot and Erick Gross ’24 got to attend the race by serving customers at La Vela Coffee, a small business owned by their aunt that had been invited to the race as part of an initiative by Formula 1 to help support and highlight local companies. The race “went very well and helped bring in lots of sales,” Elliot said. Despite the atmosphere “being very hot, it was a pretty fun and fantastic way to help boost local vendors.” As a new era of Formula 1 sweeps through the United States, the Miami community may stand to benefit most of all.