Mr. Petar Solomun steps in as Interim Dean of Students 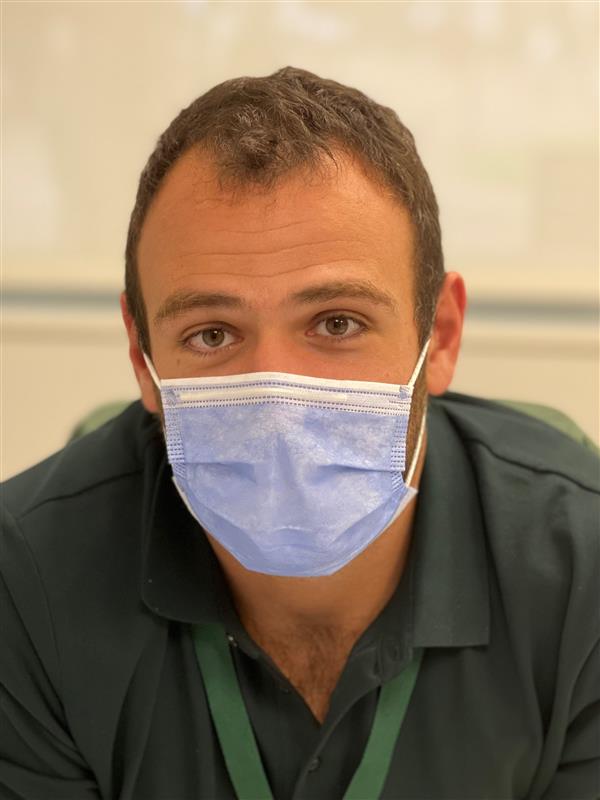 Mr. Solomun has earned a reputation as a supportive coach.

After seven weeks without an Upper School Dean of Students, Mr. Petar Solomun has been appointed as Interim Dean according to an email from Head of School Mrs. Penny Townsend. Before his appointment, Mr. Solomun was working as a substitute teacher and proctor at the Middle School in addition to helping coach the girls’ and boys’ water polo teams at the Upper School.
Mr. Solomun, born and raised in Belgrade, Serbia, first came to the United States as a foreign exchange student his senior year of high school. He then went back to earn a bachelor’s degree in economics from Singidunum University in Belgrade before focusing on playing water polo professionally in Serbia and France.
He then met and followed his wife to the United States. “Eventually, her job brought us to Miami, [and] I knew of Coach Lefebvre and Ransom Everglades from some of our mutual friends,” he said. He reached out to the school and got an interview.
After being hired as a coach three years ago, he started working at the Middle School as a substitute and proctor. “I liked the community, and eventually, with the pandemic, started helping out at the Middle School,” he explained. He stayed in this role until he got a call from the administration one afternoon.
“Mrs. Townsend just called me one day and said she thought that I might be good for the job,” he said. He came for an interview, and they came to an agreement that he start as an Interim Dean on Monday, November 8.
Mr. Solomun’s plans as dean are to begin enforcing “the clear-cut things” first. “We’re not going to enforce five things at once; I don’t plan to,” he said. His priorities are the safety and happiness of the students.
To this end, he said that he would “start with things like IDs, sweatpants … the things that are not up to interpretation.” He stressed the importance of IDs because they are vital to safety: “With seniors walking off campus, everyone needs to know that they are, in fact, seniors. It’s a safety hazard not having an ID. Not all faculty and staff members know all 644 students.”

As for the dress code, he said, “I think certain places should be respected through their dress code: school, courts, hospitals.” He thinks the existing dress code is strict enough for an academic environment while providing enough leeway for students to still be creative and express themselves.
Another significant role for the Dean involves working closely with student government and helping them plan activities. “I am very much looking forward [to working with SGA],” he said.
Student Body President Noah Zaldivar ’22 expressed the same view. “I’m hopeful, I’m excited, I think he’s a very nice guy,” he said. “I’m excited to see what we could do.”
Zaldivar explained that it was difficult to plan things without a dean, but it could have been worse without Ms. Sasser’s help. “Ms. Sasser filled in the role very nicely. Obviously she is very busy as a result, but she still helped us a lot in the interim, and I greatly respect the amount of work [she did] considering her responsibilities at the school,” he said.
Other students are similarly looking forward to Mr. Solomun’s deanship. Milo Gorey ’24, who is on the water polo team and has been coached by Mr. Solomun, said, “I liked his coaching and I think that would transfer well skill-wise into being a dean.” Victoria Porto ’22, who did not know Mr. Solomun before he became dean, was impressed by the first impression he made. “On his first day, he came and introduced himself on the senior deck. It made me feel appreciated, and I look forward to seeing him around campus,” she said.
Sabrina Shipley ’22, who has been on the water polo team since freshman year and has been coached by Mr. Solomun since her sophomore year, said, “He’s one of the most supportive coaches I have ever had. He always looks out for us, and he wants the best for us, even outside of the pool. I think he’ll make a great dean.”
Mr. Solomun has even made an impression on RE teachers. “He is extremely professional and even-keeled, and has established a rapport with our student-athletes that is backed by a foundation of genuine caring,” said Mr. Lefebvre, who has been coaching the water polo teams with Mr. Solomun since he joined Ransom Everglades three years ago. “He establishes expectations, teaches and encourages, and gets the very best out of the young people he works with. He has been an incredible asset to our program and the entire school,” he said.
After the first few weeks in his position, it is clear that Mr. Solomun is already well-known around campus. While it is still early in his tenure, Mr. Solomun is hoping to leave a lasting legacy. “I’d definitely like to leave a mark in a certain way, and I’m still yet to see how, but I definitely am looking forward to making decisions and helping the leadership or students in making this campus safer and better,” he said.