Free spirit, van lover, triathlete: the one and only Dr. Samantha Morse 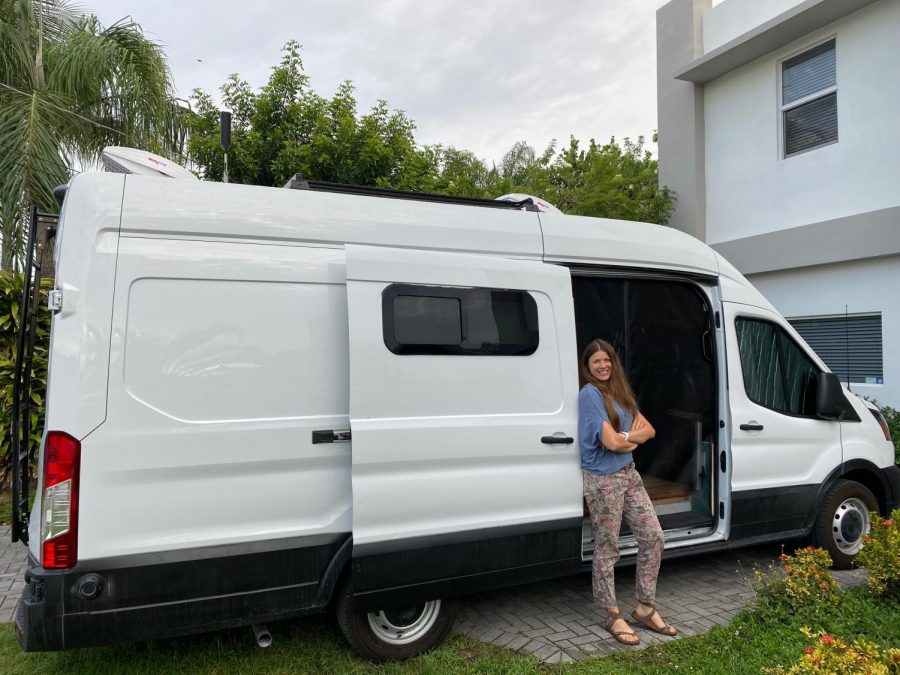 In her free time, Dr. Morse has been remodeling a van with her husband. Epic road trips await.

Dr. Samantha Morse’s life started in a small town near San Francisco, but she shortly moved to Scottsdale, Arizona where she attended high school and participated in the IB program. She was a talented volleyball player, and she even played in the Junior Olympics, coming home a winner that year. She had always wanted to attend college on the East Coast, but she fell in love with Pitzer College—a liberal arts college in Claremont dubbed the “hippie school,” according to Morse—the minute she set foot on campus.

She had always wanted to be a pre-med major, but a certain professor at Claremont quickly changed her mind during her first semester. That professor mentioned the possibility of majoring English, and Morse could not picture herself having a real job if she followed through with that. But she decided to try it.

During her time in college, she also studied abroad in Sevilla, Spain, which she loved because “the people there were so down to Earth, everything was go with the flow, and the vibrancy of the city was amazing,” she said.

At Pitzer, she double majored in English and Spanish Literature while also minoring in Arabic. Post-graduation she pictured a future working in an embassy; however, after working in Oman for a little bit, she decided that was not the life for her.

She then attended a PhD program at the University of California – Los Angeles, which required her to start teaching her second year. Throughout her five years as a PhD candidate at UCLA, she married her current husband and taught and lived in London for a year. After UCLA, she got a job teaching back at Pitzer. After teaching there for one year, she moved to Miami, her current home, to become a Ransom Everglades Raider.

Although she has only taught high school students for a little less than a year, she explained that she has enjoyed it more than college because “the frequency of seeing the same students allows for more close relationships to be formed, whereas in college, each professor only has close relationships with the same one or two students who attend office hours.”

Dr. Morse said she also enjoys “the amount of earnest effort high school students put into their classes, whereas college students are a bit more apathetic towards the work they do.”

In her personal time, Dr. Morse trains for triathlons. The running part is her favorite. She loves to travel the world, so she runs as much as she can in all the exotic places she visits. She and her husband just bought and remodeled a van, which they plan to take on a summer trip from Miami to Acadian National Park in Maine, following the Appalachian trail. She is also obsessed with her mini–Australian Shepherd, who travels all over with her.

As an English teacher, she obviously loves reading, but she also enjoys writing poetry. She reads every night before bed and has a quirky rule for herself: “Every book for fun reading has to be from a different time period and different origin, the gender of the author has to switch, and it has to be part of a new genre every time.”

Intellectually, Dr. Morse’s favorite books to read come from the Gothic genre. Although she does not enjoy blood and guts, she thrives off the adrenaline rush from the dark stories within the novels she reads. She describes herself as a hippie girl who is very spiritual, and she loves to collect crystals. She also loves going to Sunday morning farmer’s markets to pick up fresh ingredients for her organic cooking. She believes it is particularly important to maintain a healthy lifestyle mentally, emotionally, physically, and spiritually.

Dr. Morse has fallen in love with living in Miami because she thinks the people are genuinely friendly. She has built such close relationships with her neighbors that they have come out and helped with the van project in their free time. To Morse, “the pace of Miami is slower” than L.A., “but much more vibrant.”

She also described L.A. folks as “self-absorbed” and hungry for the next best thing, which is very much unlike her. Dr. Morse has more of a free–spirited and go–with–the–flow personality, which shapes her approach to teaching. As Sebastian Mateu ‘21 put it, “Dr. Morse is undoubtedly one of the coolest teachers I have ever had at Ransom. She was always very high energy in class, and she was excited and wiling to engage with her students on a level that wasn’t just about the book we were reading.”