Humans of Ransom Everglades: The many changing roles of Ms. Patricia Sasser 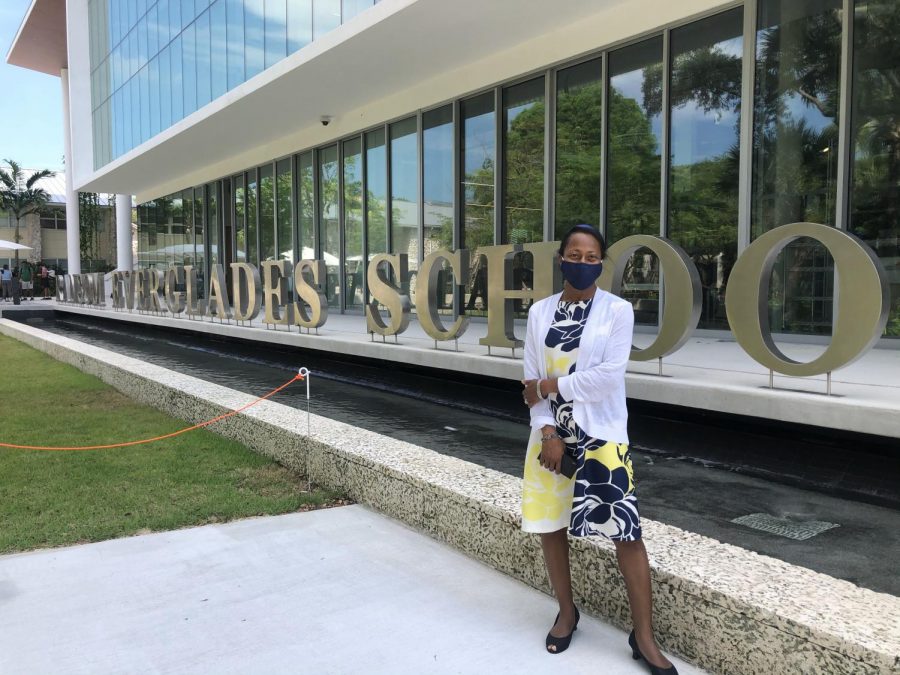 Ms. Sasser strives to bring empathy and positivity to a job that has become more complicated than ever.

Patricia Sasser, the Head of the Upper School at Ransom Everglades, moved from Connecticut to Miami in the fall of 2019. She quickly had to learn what things were and how they worked around here, all while adjusting to Miami culture.

And then the pandemic hit. She had no manual for what she was juggling. When RE students and faculty transitioned to virtual school, Ms. Sasser took upon many new roles. She felt she had to rise to the occasion, but it wasn’t easy: she missed being in person and missed the personal connections she had made with students and colleagues. Still, she made the best of it.

“I try to bring a positive attitude to school each day. I am confident in the fact that I am surrounded by good people, and we are all invested in the growth and success of our students.” she said.

Ms. Sasser is originally from Washington DC. Growing up, she was a foreign service kid. Her parents were overseas for a total of twenty-five years, which is why, from ages six to thirteen, she lived in Nigeria, Haiti and Niger. She attended boarding school at the age of thirteen and graduated from the University of Virginia. She majored in English and African American Studies. She also pursued journalism opportunities, and after graduating, she worked for ESPN. Ms. Sasser worked in the department that put on various sports events, ranging from basketball (NBA) to skiing.

During her time working in television, Ms. Sasser played volleyball, and side hustled as a wedding planner. She attended digital photo classes and hip-hop classes. She even danced in the opening act for Brian McKnight at a concert venue in Connecticut. Still, although she felt like she was enjoying everything she was doing, something was missing. She began to feel her true calling when she started volunteering at a children’s museum, where she realized that she enjoyed devoting her time to kids.

Once her husband applied for a job in Washington DC, she began to explore a career in education. She began to work at her former high school. She worked there for six years, focusing on development and then student affairs. She enjoyed the personal connections she was making with her students and felt like knowing them enriched and fulfilled her life. Eventually, Ms. Sasser did her Master’s with a 15-month-old baby at home. She later went on to becoming the class dean at a school in Connecticut for 7 years. Then, in 2019, she went on a major national job search and booked an interview for Ransom Everglades School.

Ms. Sasser started working at the Ransom Everglades Upper School in the fall of the 2019-2020 school year. She is obsessed with the location of our school and the learning environment it cultivates. “My favorite spot on campus is the edge of the field looking over the water at sunrise,” she said.

She is also amazed by students in simple ways, whether people are supporting each other or just getting real with one another. She loves playing volleyball and watching it—going to games and sitting by the sidelines. She gets so into it that sometimes she even starts to call plays. “I love cheering and rooting for people, whether that be on the sidelines or the theatre. I can be real loud,” she said.

Ms. Sasser realized during the pandemic that being in Florida was truly a blessing because she was able to be outside, which helped her navigate the chaos. During the 2020-2021 school year, every day in the life of Ms. Sasser looked different. For the most part, each day starts with her at the loop checking the School Pass wellness app, greeting students arriving to school and then getting her morning cup of English Breakfast tea. Over the course of the day, Ms. Sasser has meetings with faculty, parents, and students. It all depends.

“I do have some regular standing meetings that happen weekly as well. I also work on responding to emails, drafting communications or program remarks. I have an advisory, may swing by the Wellness Center to check in and walk through the school buildings,” she said.

Depending on the time of the year, Ms. Sasser’s day may consist of planning meetings and conversations about upcoming events like Back-to-School Night, Parent-Teacher Conferences, Prom, Awards Ceremony or Commencement. Occasionally, she may have an evening program like the upcoming Panel for New Upper School Students or an evening meeting like the RE’s Antiracism Task Force, on which she serves. “Each day holds a little something different depending on what comes up.” she says.

Throughout her time at RE, Ms. Sasser has had to stretch and grow as a person to meet the changing needs of a school in constant flux. Most recently, the nature of her job changed once again when Ms. Lindsay Danielson, the previous Dean of Students, left in February. “With Ms. Danielson’s departure, I picked up some parts of the Dean of Students position and have had help from Mrs. [Shellie] Perdigon, who has been a great support. I also took over the role of COVID Response Coordinator for the Upper School,” she explained.

Whatever happens, however, she’s committed to education for the long haul, and isn’t looking back.