SGA candidates reflect on a momentous election in an unprecedented time 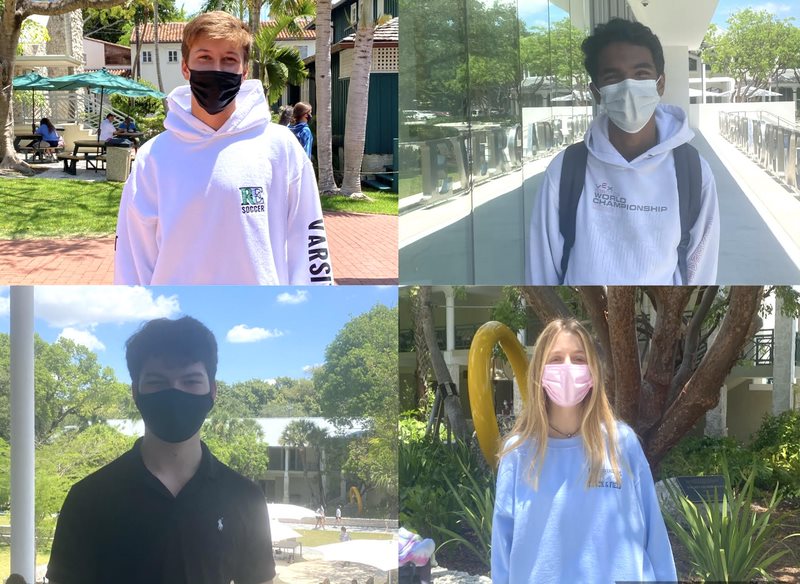 In a typical year at RE, students who are running for president of the student body are filled with fear and hesitation weeks before their speeches. They take pains to suppress their nerves when they finally take the stage, where they must appear strong and assertive in front of an audience of hundreds of students.

This year, much was the same: four candidates, vying for the top job in student government, gave speeches in front of the student body. But one thing was very different: they delivered their speeches virtually.

For Noah Zaldivar ’22, the winner of the election, the format was a mixed bag. “The virtual speech format was actually encouraging when it came to what each of us wanted to say, even if it did impede how we said it,” Zaldivar said. He explained that it is easier to say something that might frustrate people if there is no face-to-face interaction, but in the same way, the speakers cannot really receive any feedback or reinforcement while they are presenting. They miss the gratification of knowing that people believe in them, which is a feeling candidates desire.

Dillan Kaye ’22, an opposing candidate, had a mostly positive mindset about virtual campaigning. “I thought the live stream was a great platform for all candidates to express themselves and their policies,” he said.

But Lauren Zanarini ’22, another candidate, echoed Zaldivar’s views: it may not have been any more difficult for her to get her policies across, but she did feel that students were less receptive. “I consider interaction with my audience an essential part of what makes a speech and the speaker memorable, so it’s hard when you don’t know if your words are coming across the way you want them to.”

For Andre Joseph ’22, the fourth candidate, the format made jokes hard to make because they would come across as awkward. He claimed, however, “that this is just the reality with the pandemic, and everyone had to adapt to it.”

Another concern was focus: that is, whether the students who were technically watching the Google Meet stream were actually there in spirit. “I think the people who weren’t going to pay attention didn’t pay attention,” Zaldivar said, indicating it was about the active choice, not the ability of a student to focus. Joseph joined in by saying that “unlike assembly where everyone had to go, a lot of students could have skipped advisory, or their advisor put it on late. But, as far as I heard, most people were in advisory and heard all the speeches, so I think overall it was successful.”

Indeed, many RE students cared deeply about who their next president would be, and listened carefully to what the four candidates were presenting. “It was definitely important for me and my advisory to listen because we are electing the person who will amplify our voices to the administration,” said Elise Echarte ’23.

To the four candidates, that ability to amplify the voices of the student body requires certain qualities that they believe the president of the student body should possess. Joseph, Kaye, and Zanarini all expressed the same opinion: the winner needs to have a fundamental understanding of the inner workings of SGA and have the necessary leadership skills to reconnect our community. This requires passion, grit, kindness, and vulnerability.

The president–elect agreed with their beliefs and added another, broader perspective. He talked about the state of our school regarding social justice and the world. “The pandemic isn’t the biggest issue facing us at RE anymore,” said Zaldivar.

“The biggest problem facing students right now is feelings of loneliness and distrust,” Zaldivar remarked. He explained how many people do not know where to go with issues and are far out of the loop with current affairs at RE. As an example, he cited the feminine products situation in girls’ bathrooms: “The school is actively working on it, but people have no idea about the progress on it.” Zaldivar strongly believes that students should be made aware of the status of things being done for them, and to fix this, it is important to address the exact role of SGA communication and increase transparency.

His biggest priority, he said, is to set up more effective systems to hear what the students have to say. “The fact is, there are lots of delicate issues that are being spoken about out in the open at Ransom for the first time, and nobody really knows how to respond,” Zaldivar remarked. He claims he will do all he can to be inclusive of everyone and lift their voices to make RE a better place.

Zaldivar is even thinking of implementing a website or addition to MyCompass where SGA can post updates about the projects they work on, share what they discuss in meetings, and receive questions and comments about how to better student life.

Every year the student body president faces unique challenges, related to the needs of the student body. Mr. Guzman, SGA faculty sponsor, shared that “schools are always evolving, and each year brings on new opportunities for our student leaders to take on.” He explained that SGA cannot quite predict the impact of the pandemic on the 2021-2022 school year, but he trusts that Zaldivar will lead RE with the students’ best interests at heart.

“The future of RE is not all up to the president alone,” said Georgia Crosby ’21, the outgoing president of SGA. Crosby explained that the entire body of SGA must be ready and equipped to lead this school as a united front. For Crosby, SGA is the bridge between student voices and administrative access, and the future president must balance the weight of both.