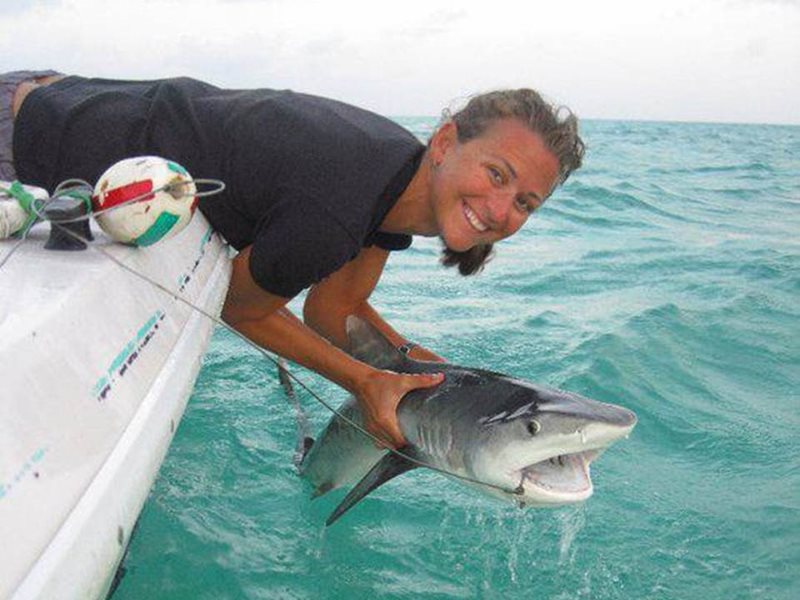 Photo given by Dr. Stump

Dr. Stump is pictured in her element: out on the water researching sharks

While Dr. Kristine Stump was having dinner with her researchers in Bimini, her mind was elsewhere. Always thinking of the life in the water. Their casual dinner conversation soon turned into a discussion about sharks.

She knew that small lemon sharks stayed close to the mangroves; but knowing just that was not enough. Questions overwhelmed her. She realized that it was probably because mangroves provide them with food and protect them from predators, but she needed a way to prove it. A quick sketch on the restaurant’s napkin turned into an experiment that led to her dissertation for her PhD.

To design the experiment, Dr. Stump created an enclosed pen with an observation tower and artificial mangroves, like the ones used to demonstrate the power of mangroves to dissipate waves during Earth Week at RE this year. To test her hypothesis, she put a huge lemon shark in the pen filled with smaller sharks and observed the results. When they were alone, the small sharks casually swam around getting food. But when there was a predator, the small sharks went straight to the mangroves. Her hypothesis was correct.

No matter where she is at a moment, Dr. Stump is always thinking beyond the surface and asking questions to learn more.

A South Florida native, Dr. Stump has always been surrounded by the ocean and marine wildlife. Snorkeling for the first time when she was eight years old introduced her to “a whole other world.” When she dove in the Boca waters and saw a Sergeant Major fish, she was fascinated. Thoughts of the unknown life in the sea consumed her. The movie Jaws made her curiosity even deeper. From then on, she never stopped thinking about the different world under the water.

Dr. Stump’s mother fostered her daughter’s curiosity. From taking her to aquariums to buying her books about sharks, Dr. Stump’s mother did everything she could to help her daughter pursue her passion. A few of these shark books were written by the first female shark scientist, Eugenie Clark. Along with Shark Experts Ron and Valerie Taylor, Clark became one of Dr. Stump’s many role models growing up. “I vividly remember saying, ‘I want to be Eugenie Clark when I grow up,’” she said.

After receiving both her bachelor’s and master’s degrees in Marine Biology from the University of Miami, Dr. Stump moved to Washington D.C to work for a federal oceanographic office. Because she missed the biology aspect of her work, she then moved to Bimini, where she worked in a biological field station to get her PhD from the University of Miami. There she researched the effects of mangrove loss on juvenile lemon sharks in their nurseries, which is where she conducted the “napkin experiment.” She continued her research in Chicago at a post-doctoral research program with the Shedd Aquarium for 3 years. During this time, she was based in the Bahamas researching Nassau Grouper spawning aggregations. Next, the Cape Eleuthera Institute in the Bahamas welcomed her as a research associate of coral nurseries and coral surveys for about six months.

While scrolling through Instagram, Dr. Stump saw an opportunity to coach softball at Ransom Everglades. She decided to give it a shot and ended up being an assistant coach on the softball team for a season before getting an offer to teach at RE. Dr. Stump accepted the offer right away because, she said, “I had such a good experience with the players and their parents, it seemed like an awesome community.”

“She expects a lot from us but always prioritizes our effort and devotion over our actual performance,” explained Shuli Rosenfeld ’21, a member of the Girls’ Varsity Softball Team, regarding Dr. Stump’s coaching. Rosenfeld says that “the team would not be the same without Dr. Stump.”

When Dr. Stump joined the Ransom Everglades community, she was welcomed with open arms. She is one of the very few teachers at RE who did not come from a background in teaching. “My experience with teaching has very much been learn as I go, trial and error,” she said.

Her colleagues in STEM who were set on the path to teaching have taught her a lot about the best practices to use in her classes, such as engaging presentation skills. According to Dr. Stump’s students, the way she teaches gives them a direct view into how what they are learning can be applied to the real world.

Chloe Wiesenfeld ’21, a student in Dr. Stump’s AP Environmental Science class last year, said, “I love how Dr. Stump had such a different teaching approach than many of my other teachers. She brings her personal experiences to the classroom.” Wiesenfeld greatly values all that Dr. Stump has taught her and said she would be sure to carry her knowledge into the world when she graduates from RE. Dr. Stump has not only taught her valuable information about the environment, but has also showed Wiesenfeld how important it is to be curious.

Wirth Munroe ’22, a junior in Dr. Stump’s Environmental Science class this year, described how rewarding it is to have a teacher who is truly so passionate about what she teaches. “Dr. Stump not only helps me strive to do my best in the classroom, but she also helps me to be a better person in my everyday life. She does this by encouraging me to reduce my carbon footprint from the standpoint of a teacher and a friend,” he said.

“Dr. Stump teaches with more passion than any teacher I have ever had. Her devotion to educating her students about the environment and its threats became very clear, very quickly,” said Rachel Bienstock ’21. “It is so refreshing to go to class every day and be inspired to do more to help preserve the earth.”

Dr. Stump’s knowledge and experience have landed her multiple appearances on Shark Week. Her most recent feature was on a TV show called Sharks of Ghost Island, where she and her team explored why an abandoned island attracted so many sharks. She really enjoyed this experience because she was able to film an episode with her friends doing what she loved: working with sharks. She saw her role on Shark Week as “a voice of science, not sensationalism,” she said. She made it a priority to deliver factual and scientific information. Her goal was for her audience to watch the show and say, “This science is actually interesting.”

What’s next for Dr. Stump? The research continues. Since January, Dr. Stump has been working on a Hammerhead project right in RE’s backyard, Biscayne Bay, funded by National Geographic. She and her colleagues from the University of Miami have been catching, tagging, and tracking baby Hammerhead sharks.

Along with her students, she frequently finds herself asking the question: Why sharks? Why is she so interested in these creatures? Among other things, her fascination has led her to name her dog, Leucas, after the scientific name of a bull shark, Carcharhinus Leucas. At the end of the day, she said, there’s only one explanation: “I am an adrenaline junkie.”