Have you met all of RE’s inhabitants? 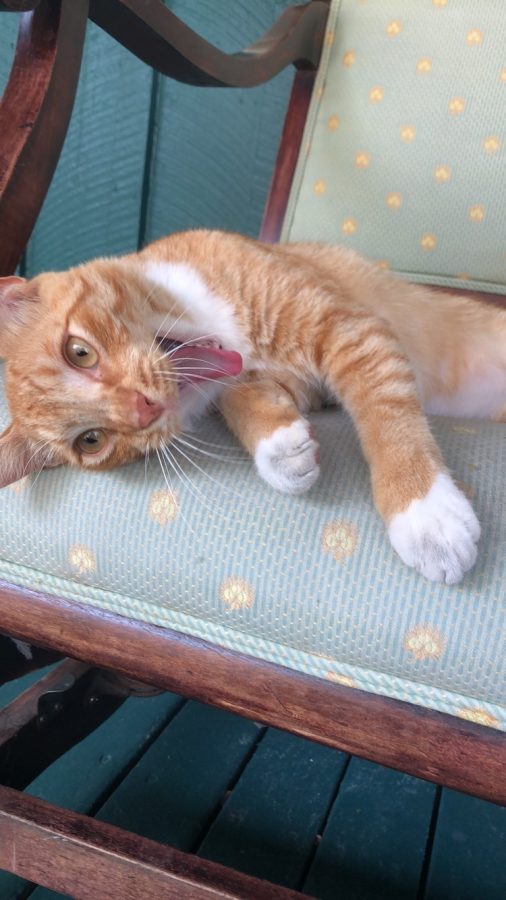 Tammy, one of the cats who call the Pagoda home.

Students and faculty come and go on RE’s campus, but for some it is a permanent home. Often students take for granted the unique animals that share our school; however, some have been accorded unofficial mascot status.

“You wouldn’t expect us to have three cats on our campus that live right next to one of our iconic buildings, the Pagoda,” said RE alum Zachary Vuong ‘19. During his years at RE, Vuong was known to have cared for the cats on campus. His connection with the environment as well as access to the bay led to him studying environmental biology in college, he said.

RE’s Upper School campus is a bustling landscape of biodiversity, from cats to pigeons to alligators. The following is a survey of the critters around campus and how to properly interact with—or, if necessary, avoid—them.

A common sight near the pagoda and senior deck are a clowder of cats, consisting of the ginger Timmy; the beige, black and ginger Lulu; Black Tail, who is unsurprisingly a grey and black tabby; and the completely black-furred Midnight.

The cats have a relaxing effect, according to Alex Prio-Touzet ’21, who described engaging with them as “a really nice break from the school atmosphere.”

“I love animals and I’m really close with my pets at home, so, it’s nice getting some of that same joy at school,” Prio-Touzet said. However, the cats need to be approached with care. They are not housecats. When approaching them or walking by them, do so slowly and with caution.

For those who are birders, amateur or not, RE provides a rich environment to view and photograph some of the more exotic visitors to Florida, along with the ‘usual suspects.’  Prio-Touzet, a bird watcher hobbyist, says she has seen a blue grey gnatcatcher, woodpeckers, blue jays, and “mourning doves on campus that pop up quite a bit. Those are the ones that look like pigeons, but they are not.”

While these birds may look cute and beautiful, it is important to remember to give the animals space and to not crowd them, since, according to Prio-Touzet, “all the birds on campus are really shy and don’t like engaging with people.” So, while you may want to go up to one of the birds you see, this is unsettling for the wildlife; instead, just relax from a safe distance, ideally seated outside the Pagoda (which, according to Prio-Touzet, is the best place to find animals on campus).

The Bay is home to a plethora of different marine species, some of whom occasionally visit the campus. Avoiding the random crocodile is a rite of passage for many freshmen.

“We have thousands of species in the bay, from microscopic to big charismatic megafauna,” said Dr. Kristine Stump, who teaches Biology and Marine Field Research at RE. Organisms like phytoplankton, manatees, sharks, crocodiles, turtles, fish, dolphins, and more call the bay home. It is access to the bay that allows for courses at the school like Marine Field Research, where students can get hands-on with wildlife. According to Dr. Stump, there are plans to start a hammerhead shark nursery in the coming year.

Ransom Everglades students are in a very special position with their school situated right on the bay and nature built into the school’s campus. But this closeness to wildlife is also what makes our campus potentially destructive.

Thinking about the animals on campus should also force us to think about some of the features of our campus that are dangerous to them, including:

There have been 3 mangrove clean ups in the past months, cleaning up nearly 1,000 piles of garbage that have wound up in the area, coming from higher on campus and going towards the ocean or just stuff left on the field. This trash is dangerous if it goes into the bay, where animals can be choked on the plastics and metals.

While the new building is impressive in its size, it features a large area of glass windows that are dangerous to birds who cannot see the glass, instead seeing what it reflects, and will fly into the windows and die.
“I think it’s beautiful, and I think the fact that it’s made of glass is phenomenal, but obviously quite a few birds have died by crashing into the wall,” said Prio-Touzet.

Most of the cats keep to themselves in the quad, pagoda, and Senior Deck area, because those are the only real open areas on campus. RE is very crowded and cramped.

“The campus itself, I wouldn’t really say it’s really good for the cats. Especially considering how skittish cats are... They could only be in that one area [The Pagoda] is kind of pinning them in,” Vuong said.

The next time you have a few moments between classes, look for some of the other “Raiders” that share our campus with us.