Out of the “bubble” and into the fire: How the Heat are weathering COVID-19 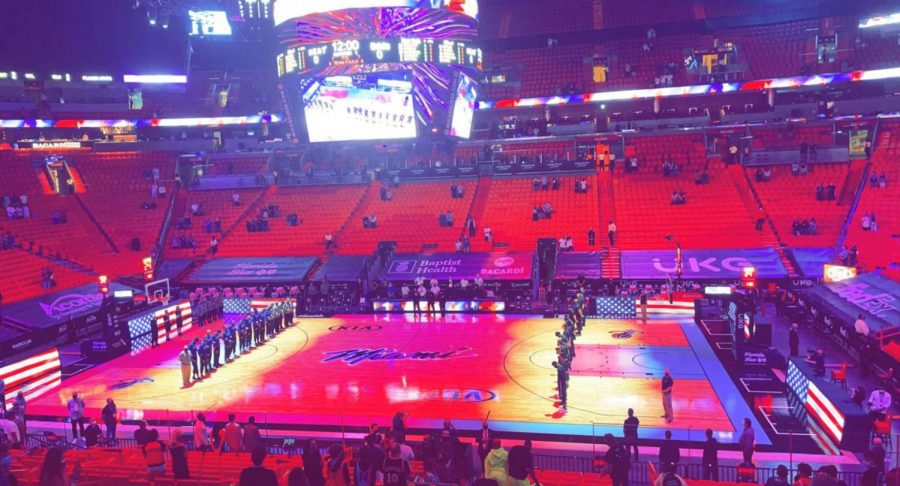 The Miami Heat compete with very limited fans in the stadium

On December 22, 2020, just 72 days since the 2020 NBA Finals, the 2020-21 NBA season began. The Miami Heat and the entire league are coming off the most abnormal season in recent memory, with the end of the season concluding in a “bubble” at Walt Disney World in Orlando, Fla., isolating players from the rest of the world.

The Heat had an extremely successful run in the “bubble,” making it all the way to the NBA Finals where the Los Angeles Lakers defeated them in six games (4-2). This season, the team has left the “bubble” and made an attempt to return to some level of normalcy, relying on a new set of precautions in order to protect players, coaches, referees, and other staff.

To better understand how the NBA is adapting to the pandemic post-“bubble,” I spoke to Steven Walsh, a team attendant for the Heat. He explained that, outside of taking personal precautions such as wearing masks, washing your hands, and practicing social distancing, the NBA has put in place and enforced several safeguards. “Full-time employees [are tested] every single day, part-time employees must have two negative tests before each game [they work], and all employees must wear masks at all times.”

As team attendant, Walsh is responsible for the set up and breakdown of the visiting team locker room as well as handling personnel and player requests. His position became even more pivotal this year, as there are now more locker rooms to manage: “The team is divided into two separate locker rooms,” while “coaches now have their own locker room, whereas before they all shared one,” he said. The NBA implemented these safety measures to limit the amount of people in indoor environments.

Another stark contrast between this season and previous seasons is the limited number of fans, or the absence of fans completely in some cases. On opening night, only six of the thirty teams allowed fans in any capacity.

The Heat opened the American Airlines Arena to fans on January 28th. The team’s plan is to admit a limited amount of season ticket holders.

If you are lucky enough to be one of the few attendees, you can expect a new sight at the security check. The Miami Heat is deploying several “COVID-sniffing dogs” to screen fans prior to entering the stadium.

“The games, no doubt, feel different without fans,” Jacob Simkovic ’21, an avid Heat fan, said. “I wish I could be in the stands having a good time, but obviously, the virus won’t let that happen.”

The team’s audio crew is attempting to counteract that by adding in artificial noises, which “help keep things somewhat normal,” Walsh said.

Ron Rothstein, the first head coach of the Miami Heat and now a TV studio analyst, explained that “not having fans was weird at the beginning, but today it is something we all have got used to.”

Rothstein even suggested that it might take a while to get used to having fans back.

With all these precautions in place, the Heat started the season 9–14. Simkovic noted that the Heat have looked especially “sloppy” to start the season. The stats back up his claim, as the Heat lead the league in turnovers per game, a stat for which they were in the bottom half of the league last year.

While the Heat’s carelessness on the court may have been responsible for early struggles, as of late there is a different threat to the Miami Heat’s winning. Following their January 9th game against the Washington Wizards, the Heat have been put in the seemingly endless cycle of COVID-19 contact tracing protocols and minor injuries. Contact tracing can sideline a player for up to two weeks, essentially registering them inactive for five to seven games, especially with the new scheduling giving teams more double headers in order to limit travel.

Having a good portion of the team injured or quarantined has negatively impacted the gameplay on the court. Rothstein noted that “the Heat’s lack of fully attended practice makes cohesion tough so early in the season.”

New bright spots have emerged as more minutes become distributed down the roster to compensate for the shortage of heathy players. One of these players is second year forward KZ Okpala, who posted 16 points in his first career start.

Rothstein pointed out that these valuable experiences could be vital for player development as we get further into the season.

However, Walsh is hopeful that the Heat’s number of “savvy veterans” will shine in a season that presents more challenges than any other, leading the team to a winning record and into the playoffs.

With the COVID-19 pandemic showing no signs of slowing down, the vaccine may be the only safeguard that can prevent the season from being suspended or postponed.