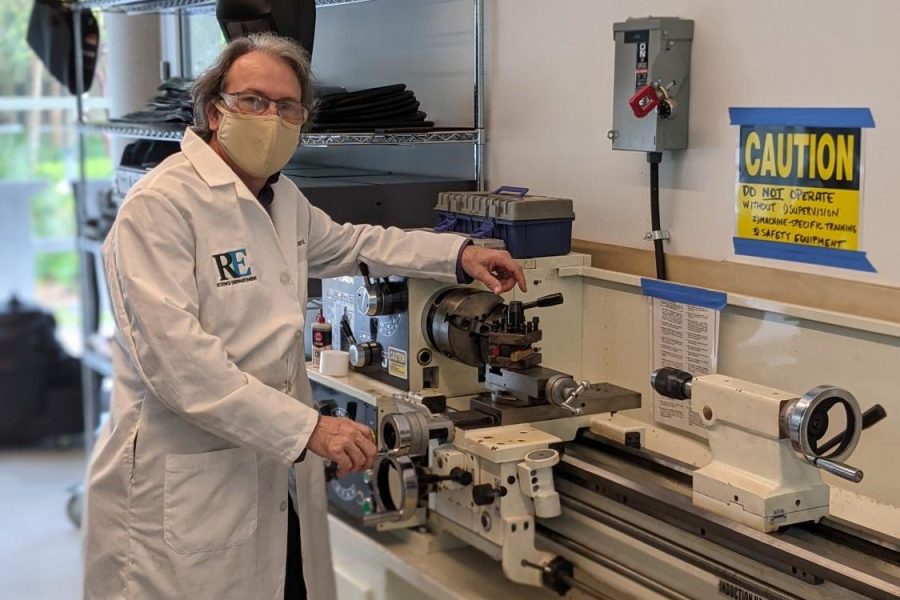 According to Mr. DuBard, the brand-new Engineering facilities will make it much easier, and safer, to build everything from product prototypes to robots.

Since its opening at the beginning of the year, students have flocked to the brand-new STEM Center and the new features that come with it. Some of the most interesting features reside in a room on the ground floor, where Mr. Robert DuBard teaches Engineering classes and the RE Robotics Team.

The room takes up the entirety of the north side of the first floor, and is segmented into three parts, all just as important as the others: The section closest to the entrance is used for classes, including Mr. DuBard’s Engineering and all-new Engineering II classes, the middle is used by the Robotics team for working on and testing their robots, and the back room houses new machines that Mr. DuBard is very excited about. Earlier this month, I had the privilege of interviewing Mr. DuBard regarding the STEM Building and what is now possible in Engineering and Robotics. These were his thoughts:

How have been enjoying working in the new STEM Building, especially the robotics room?

I have to say that it’s been a real game-changer. One of the most noticeable things is that we’re [the robotics team] front and center. Everybody gets to suddenly become much more aware of the teams’ work and them meeting every afternoon. So that visibility alone has inherent value. The organization of everything is much better now that we have sort of a planned place that we have been able to move into thoughtfully, as opposed to the old place, which kind of organically developed. We didn’t really have a plan with it. The new machine room is certainly much cleaner, much better lighted. It’s safer. I feel much more confident now that I can have students in there, working with the machines in a way that is unlikely to endanger them in any way.

We also have some new equipment that we have been able to make use of. The laser cutter has really been a big deal, especially in my Engineering and Engineering II classes, but even the VEX team has made use of the laser cutter to make really precise plastic parts very quickly. The Cricut machine was instrumental in the Engineering II class for one of the major projects in there. We now have the space so we can set up the entire VEX field. That’s spectacular.

And then in the machine room itself, we got some new equipment: we got a new band saw, a welder, which we never had before, and of course the sort of centerpiece there, the plasma torch. Unfortunately, we haven’t been able to use the plasma torch yet because we still have some safety equipment that we have to put in place, but I very much think that it is going to transform the way some of the things work in BattleBots, in particular.

But also, because of the new space, and some of the new capabilities of the space, and the visibility of it, the art department in conjunction with me have developed a new course for next year called “Art-Tech.” I am really looking forward to getting people like Mr. Guzman and Mr. Stock and Ms. Dalins into this space and having them see how this space isn’t all just nuts and bolts and grease and gears. There’s a lot of real potential here for beauty and aesthetics and inspiration from an artistic standpoint.

There still is some equipment that hasn’t arrived yet. We’re going to get more 3D printers than we already have. We did adopt one from Mr. Rodriguez that I’ve been very impressed with. It’s really reliable, does high-quality parts, and works quickly. It’s also cheaper to operate than the other one we have. We’re going to get a second of the Markforged that we have, and then we’re going to get a resin-type printer. And the resin printer has the ability to print things that actually are transparent. It can print elastic things, flexible materials, and it can even print things that are biocompatible if you equip it with the right resin. So that’s a really interesting capability that we’re going to have, in addition to what we had before.

How has teaching in the STEM Center impacted your classes and robotics?

In terms of teaching, certainly COVID has had more of an impact than anything else, but because of the additional space and the great connectivity that the IT has been able to provide to us here, it has made teaching remotely and hybrid really seamless. It’s been really ‘walk in, hook up the stuff,’ and we’re ready to go. And yes, the new machines have been used both in Engineering I and Engineering II, particularly the laser cutter and Cricut and of course the 3D printer as well.

How has the robotics team been doing this year?

It’s been a challenge. I can’t pretend it hasn’t been. In many ways, I think of this year of COVID as a year of expectations, but I can tell you that my Vex teams have been pushing to do their absolute best in spite of the challenges really since last April. From the moment we said, ‘We’re going remote,’ they asked, ‘How are we gonna continue doing Vex?’ Usually, we would have gone to six events, but this year, we’ve only been to one. At that event, one of the teams got first place in the qualifying round, three of them took awards at the end of the day, and the M team took home the design award, which is a prestigious award: they’ve done really well in the skills qualifying. So in general, I’d say that Ransom was one of, if not the, most decorated school at that event, which is pretty remarkable. BattleBots has been waiting for an opportunity to compete, and last week, we discovered that during the first weekend of the upcoming break (February 13-14), we will be competing in a BattleBots event up in Stuart, Florida, and I expect good things from them. They know what they’re doing; the timing’s a little tight, but I’m confident they will do well.

What are your plans for using this space in the future?

Where we have the Vex field right now, which just went up last week because of the Vex team, it’s actually going to be elevated, and we’re going to be able to use it for storage underneath, which would allow us to use the shelving for student work. So, when my students are building their bridges, I’m hoping they’ll be able to put them on there. So, that’s something we’re moving towards, that’ll be a change. Then, out on the west side of the first floor of the building, we’re actually working to install what I call a ‘Jewel Box,’ which is a six-foot-by-six-foot cube that can be used for displaying student work, and after school, it will be used as a test box for Battle Bots. So, we’re really looking forward to that. Another thing you might have noticed on the screens as you come into the building is that they are now looping videos that were produced by my Engineering II class to summarize their product development throughout the first semester, and I think that this is another way to celebrate student work. I see this space as a way of doing that in lots of ways.

How has COVID-19 affected this year? Has it stopped the building from realizing its full potential/usage?

We’ve certainly had to be flexible. One of the things we’ve had to be flexible about is, in the Engineering I class, I usually start the year off with a group, hands-on, sort of MacGyver project. But, since we were remote for the beginning of the year, that obviously wasn’t an option. So instead, we got more into the academic side of it; we began learning Excel, about the Apollo missions to the moon, and the CAD software before we actually got the chance to get our hands dirty. Now that we’re in the second semester, I’m really excited that the bridge projects are  underway, and this will be really the first time this year the students will have the chance to sit down and build something in Engineering I. Now, this was the first year of the Engineering II class, so everything was kind of new, but I hoped the class would involve more group work, and we haven’t been able to do that because of COVID. But they were able to make use of the machines, which was nice. For the robotics teams, we were inspired by the athletic programs and their ability to play as a team, while remaining safe, and I have to give a shout out to Mr. Goff for helping us set up a structure for the robotics team.