Despite Valiant Efforts, Raiders Are Defeated By Monsignor Pace Spartans 85-88 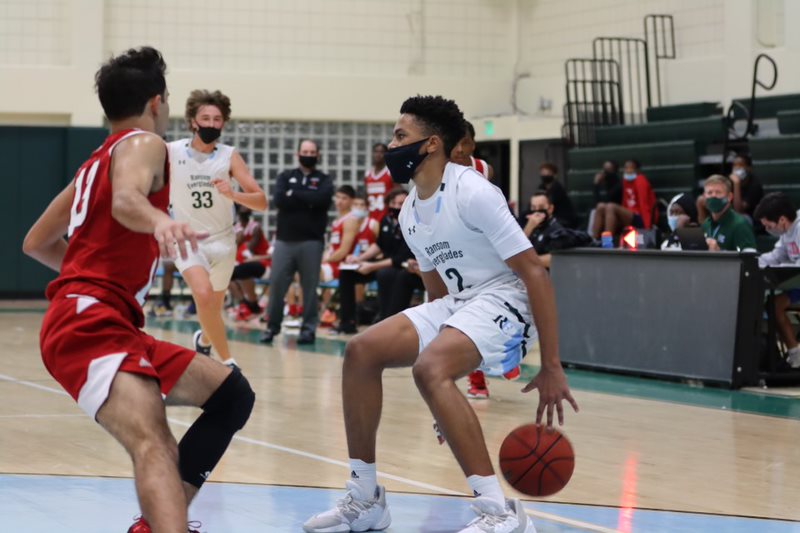 Cam Franklin '22 crosses over on his way to posting 29 points.

The Ransom Everglades Raiders boys’ varsity basketball team faced the Monsignor Pace Spartans on Friday night in the Henry H. Anderson ‘38 Gymnasium. The Raiders were down their seven top players in an attempt to stay COVID–safe for districts, which are quickly approaching.

Both teams fought hard until the end, but ultimately, the Raiders were defeated in overtime, with a final score of 85-88. The Raiders were led by Cameron Franklin ‘22 with 29 points, Asher Zhuk ‘23 with 19 points, and Eli Goldman ‘22 with 14 points.

The first quarter started off strong for the Raiders, but the Spartans slowly started to take the lead. The game was vacillating, and Zhuk made a three-pointer to tie the game 18-18. The quarter ended with the Raiders down 18-22.

“We started off slow but picked up our energy going into the second half. [We had] too many first-half turnovers, but in the second half we took care of the ball better,” said Goldman. “Going from a few minutes a game to playing an entire game is not easy. There is nothing like in-game conditioning.”

Staying aggressive on defense, RE kept the game close during the second quarter. Goldman scored a three-pointer, which picked up the speed of the game for the Raiders and led Ransom Everglades to take a 40-35 halftime lead.

The Raiders held onto the lead throughout the third quarter, dominating on the offensive side of the court. The quarter ended with the Raiders up 62-54.

The fourth quarter was very faced–paced and back–and–forth throughout. The Raiders kept up their pace with some big shots. Zhuk tied the game with a steal into a transition layup, tying the game at 68. The Spartans then took the lead with one minute to go, but Goldman tied the game, 79-79, with a three-point shot, with 17 seconds on the clock.

“We needed to be better defensively and stronger with the ball when the pressure came,” said Zhuk. “I needed to be smarter with fouls and need to be better conditioned. For our next game, we need to make sure we’re sticking to our defensive principles and staying focused on both sides of the ball, but I am very confident that we are prepared for districts with the way we have taken COVID seriously and gone full speed in practice to be ready.”

There was palpable tension going into overtime. The game bounced back and forth between the Raiders and the Spartans. With five seconds left to go, and the Raiders down by two, Alex Tacher ‘22 was fouled and sent to the free-throw line for two attempts, with pressure riding on his back. Tacher only made one free throw, and the Spartans were quickly sent to the free-throw line with one second left. The game ended with the Raiders down by three, 85-88.

“I am super proud of the guys and really thankful they took advantage of this opportunity to get significant minutes,” Head Coach Scott Berman said. “I feel confident that we as a team have made every sacrifice possible to get through this season, and that, combined with luck, has kept us going.”

The Raiders now hold a 13-9 record and will compete next on Thursday night in the Henry H. Anderson ‘38 Gymnasium against the Everglades Preparatory Academy Panthers.

“Although we lost, I still feel like we gave it our all,” Franklin, the Raiders’ leading scorer of the evening, said. “Going forward, we need to work on gaining more confidence and hitting the open man quicker.”