Raiders Cruise Past Mavericks with Four-Goal Second Half 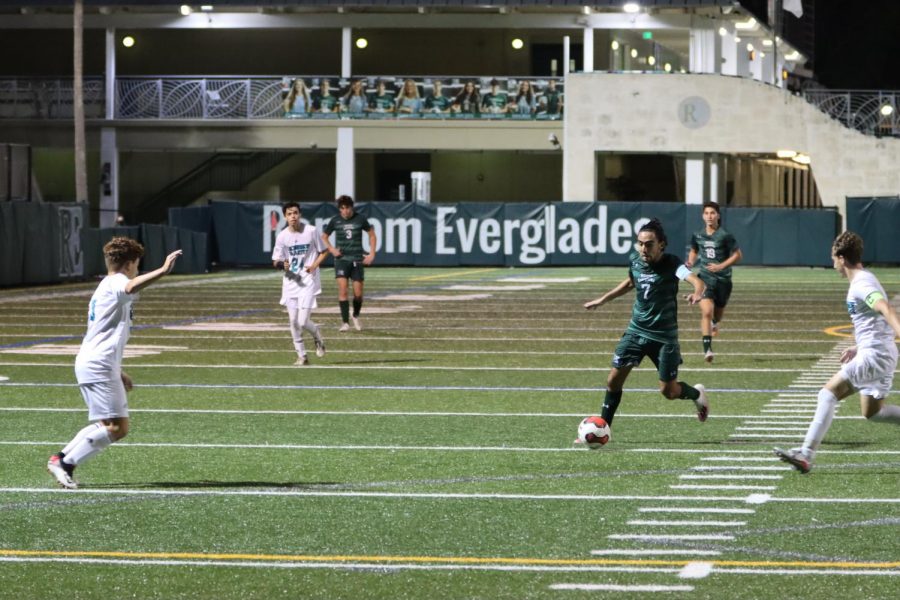 Daniel Mendoza ‘21 pushing the tempo through two defenders early in the first half.

“Nico Sosa played an excellent game, mostly from the wing back or full back position,” Stone said. “Everyone saw his two magnificent assists in the last quarter, but he also defended very well, taking his chances to serve the ball to our midfielders and forwards. We were effective with our chances to score and stayed organized and disciplined defensively.”

RE started off the first half controlling the tempo, preventing the Mavericks from crossing the midfield line into Raider territory and creating chances to score early on with a strong midfield attack. The Raiders opened up the scoring when Pulido made a 20–yard strike into the top left corner of the goal at the end of the first quarter.

“This is the kind of momentum we need to be building, as I truly think we have a very good shot of making it far in the playoffs” co-captain Danny Mendoza ‘21 said. “Everyone contributed in the way they had to, and we truly played as a family.”

Before entering halftime, the Raiders scored a goal, with a Schein ‘21 header off a corner kick from Mendoza with 7:30 left in the half. Ransom Everglades would hold the Mavericks to zero goals and take a 2-0 lead over Archbishop McCarthy at the half.

“I felt that as a team we are learning to become more responsible and accountable, and hopefully we keep seeing progress like we did yesterday,” Stone said. “Yesterday, both Thomas and I scored on corner kick sequences that we have been practicing even more than usual.”

Hoppenstein added on to the momentum by scoring his first goal of the season after the last water break. RE scored again from a corner kick to Stone who headed it right into the back of the net. The Raiders would score a season-high three headed goals with strong wing play from all midfielders.

However, the Raiders did not take their foot off the gas, continuing to control the tempo of the game resulting in Lopez and Kaye each scoring a goal with under five minutes to play.

“Our performance levels are determined not really just by the score, but also by the way we control the game and especially by how we stay accountable for each other,” Stone said. “We must also be very careful with COVID especially at this time of the season. Taking as many precautions as we can, could make a big difference for us heading into the postseason. I cannot wait for the four regular-season games left, and then of course the postseason. I am looking forward to continuing to train hard every day and to keep improving on minor, but important details of our tactics in order to be well prepared heading into every game.”

The Raiders are now 8-1-4 on the season as they prepare to take on the Coral Gables Cavaliers on Tuesday at 6:00 p.m.