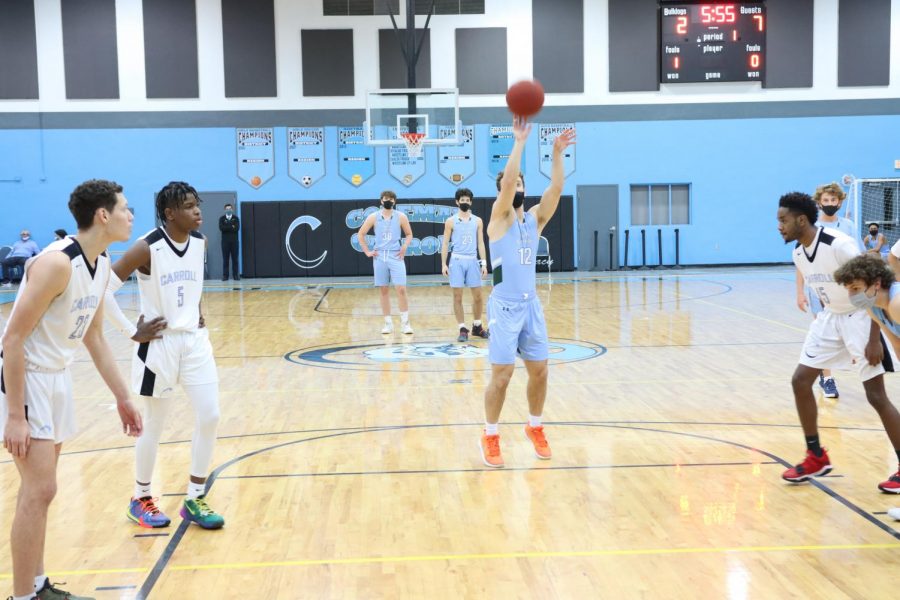 On Friday night, the RE boys’ basketball team traveled to Archbishop Coleman F. Carroll High School and fought hard until the last buzzer, but ultimately came up one point short, with a final score of 66-67. Lucas Ortiz ‘21 led the Raiders with 31 points and 6 rebounds, and Daniel Ribeiro ‘23 had a phenomenal shooting night, making four three-pointers.

“Overall, we played well; [we] just had too many turnovers. And the Bulldogs made a bunch of tough shots which were hard to defend,” said Aidan Rothstein ‘22.

After a tough, back–and–forth first quarter, the Raiders held a lead of 19-17. RE fell behind midway through the second quarter, but Ortiz helped the Raiders keep pace with the Bulldogs by reaching the free-throw line three times, only missing one. The quarter ended with the Raiders up 32-31.

“The big halftime adjustment was helping more on middle drives because [the Bulldogs] decided to spread out on offense and attack from the middle of the floor,” RE Head Coach Scott Berman said. “Honestly, it was two really good teams going at it. We had to keep getting the ball to Lucas. He was unstoppable last night.”

Ransom Everglades would eventually take the lead in the third quarter with Daniel Ribeiro ‘23 making three straight three–point shots. “We just have to work on staying in front of guys on defense and making sure we move the ball on offense to get good looks,” Ribeiro said. The quarter ended 47-45 with RE in the lead, and both teams fighting hard.

With tensions rising even more, the game continued to be fast-paced and extremely close into the fourth quarter. Both teams played strong on the offense and defensive sides of the court. With less than a minute to go, and the Raiders down by two, Ortiz made two free throws to tie the game at 60-60, taking the game into overtime.

The game was down to the final seconds. Ortiz faced the free throw line yet again, with no time left on the clock. The Raiders, down by two, needed these shots to tie the game into a second overtime. With so much pressure on Ortiz, only one shot was made, leaving the final score 66-67.

“Being on the line at the end was definitely nerve–wracking, and I should have made it,” Ortiz said. “Overall, I think we could have won, even being short one of our best players (Neil Schiff ‘21). Turnovers are what made the game. Also, Daniel [Ribeiro] made a huge impact in the second half, which was the reason it was so close.”

“I don’t think we played badly, but we could have played better, and we just have to bounce back tomorrow,” Ortiz added.

The Raiders now hold a 12-4 record and hope to find success on Friday night when they take on the Southwest Senior High Eagles, on the road for the second game of their doubleheader.

“With Nick and Neil both out, tonight is really a night for some of our young guys to step up,” Berman said. “It can’t just be Lucas and Daniel scoring. We’re going to need some of our bench players to really step up so it will be a good test for us.”