Humans of Ransom Everglades: Thomas Schein ’21 on getting injured and fighting through it 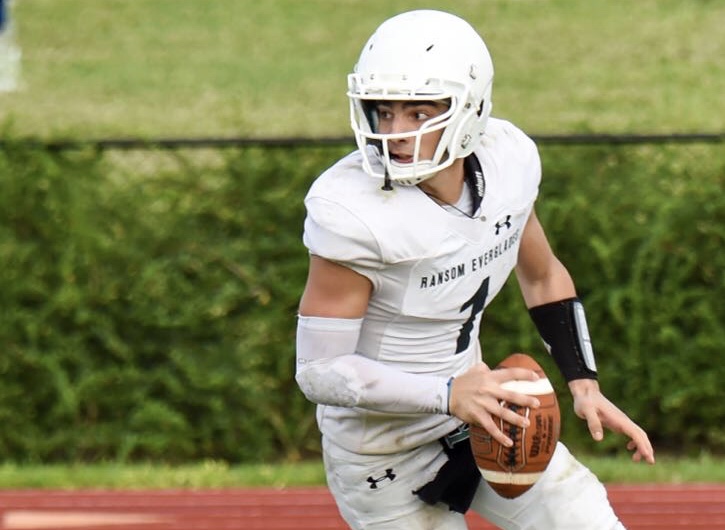 Thomas Schein '21 evades the rush during the Battle of the Oar this past fall.

Thomas Schein ’21 was the quarterback for the RE Football team in the fall and played, most recently, on the Varsity Soccer team during the winter season. He has had a healthy and successful year of sports so far, but this year has been much smoother than other years in the past. Schein has always had a passion for sports, but ACL injuries (ACL stands for anterior cruciate ligament, an important ligament in the knee) have kept him from being able to do what he loves. Schein has suffered a torn ACL three times. The first time he tore his ACL was during a soccer game in eighth grade, and he made it back for football in his freshman year. In the second game of the season, he tore it again. In his sophomore year, he was finally able to play an entire football season. However, in his junior year, he tore his ACL once again early in the football season.

I recently spoke with Schein, and in our conversation, we talked about the effects of the injuries, his reactions to them, the recovery process, and other topics as well.

How exactly did your ACL injuries occur? Can you describe the situation?

All right. Well, the first one happened in eighth grade. It was during a soccer game; It was our third game of the year. Off a throw-in, they threw the ball in front of me, I went to go after it, and the keeper got there before I did. When I went to avoid the goalie, I planted my left foot, and that’s when I felt my knee give out. I went down on the floor and I knew something was wrong. They carried me off the field, and then I went to get the MRI later. The next morning, I found out it was torn. That was the first one in eighth grade. Then I did rehab for about seven months and made it back for football season the next year in ninth grade. I had made it through the first game of the year. In our second game, which was against Palmer, midway through the first quarter on a fourth-down play, I rolled out to my left, avoided one defender, and kept running. I did not see another defender coming and he pushed me out of bounds. That’s when I felt my leg plant again and felt the knee give out. That time, I knew what had happened since I had gone through it once. I knew it was the same situation. I walked off the field, went back into the locker room, and it was a tough situation at that point knowing that I had to go through the same process again. I got back to work and came back in time for my sophomore season. I played the full year, everything was fine, and then junior year came around. The fourth game of the year was against Coral Shores. On a read-option play, I kept the ball, and when I was running with it, I tried to make a juke move. I planted with my left leg and I felt the knee give out again. That’s when I knew, since I had been through it twice already. At that point, I didn’t know what was going to happen. I didn’t know if I was going to play in my senior year, or what the situation was. So that was a very hard time in my life, especially after that third one.

How did the injuries during that year affect the seasons in which you were injured? Were they early in the season? Were you planning on playing other sports as well?

Yes. In eighth grade, I was going to try to play lacrosse that year and was unable to do that. I was unsure about playing football the next year, but I made it back for that. When it happened again freshman year, I wanted to play soccer again in high school, but because of these injuries, I haven’t been able to play soccer until this year. It’s been football or nothing because of these injuries. My plan was to play football and soccer in high school, but because of the three ACLs, I never got the chance to play soccer. I didn’t even play in my sophomore year because I wanted to be healthy for my junior year, but then the same injury happened junior year. Up until this year I haven’t been able to play soccer, and that’s what I really wanted to do.

Both times you got injured after that first one, you said you knew right away that it was the same thing again, but what was your immediate reaction?

Right. Just knowing that it was the same situation, but at the same time not wanting to believe it. Especially because you go through therapy for so long, work your butt off, and put a lot of work into it for it just to happen again. It feels like all the work was just wasted away. A lot of emotions went through my mind, especially going back in the locker room with my parents. Both times after that first one were just really emotional for me. It was tough.

Talking about the recovery, how (physically and mentally) did you recover from these injuries? What steps did you take, what activities like therapy helped you?

It was constant physical therapy, that was my life while I was hurt. Like I said, physically, it was just constant physical therapy three to four times a week, doing whatever I can at home, and just trying to get my way back to go to play next season. I honestly think, when that happens to you three times, the mental aspect of it is the hardest. It helped me get stronger in the long run, especially knowing that if you work hard, you’ll be able to play next season.

Yes exactly. I can’t imagine the mental part of that. How about your teammates? Did your teammates help a lot with your recovery? Were they very supportive?

For sure. I don’t think I would have decided to come back if it wasn’t for my teammates. Especially after last year. I remember the locker room after that game. After I got hurt, it was a wreck. No one was talking, it was just an emotional locker room. I got a bunch of texts after the game from all my teammates. It motivated me to get back, and I knew we were going to have a good team coming back for senior year. My teammates said they wanted me back, so that motivated me to get back the next season. They were always there for me throughout the process, so I was really grateful to have my teammates around me.

Have the injuries made you stronger, in a way? If not, is there anything positive that has come from these injuries?

For sure. Not just in terms of sports but I think just going through these injuries has taught me a lot about perseverance. Just because something bad happens doesn’t mean you can’t come back from it and be successful. Sports have been a huge part of my life, and going through the injuries is tough because I want to be out there with my teammates, being active. When you can’t do the things you want to do, it’s tough. Not to be cheesy or anything, but you get knocked down, and you have got to get back up. That’s a lesson I took from all these injuries. You can’t let a few bad things take you down. For sure, I think I’ve definitely gotten stronger.

What would you tell someone with an ACL injury or a similar injury to yours? What advice would you give them?

Obviously, the first time around it’s always tough, and you might have the initial reaction of “why me?,” but since I’ve been through it a few times I’ve come up with a 24-hour rule. You’ve got 24 hours to feel sorry for yourself and be sad about it, but after the 24 hours you have to start figuring out what you have to do to start playing again. Injuries are tough, and there are things we can’t control, but you have to move on.

Can you talk about your passion for sports in general? And how they have affected you in your life?

I’ve been in love with sports for as long as I can remember. My dad played quarterback in high school and a little bit in college, so he brought me into it at first. When I was little, I was playing everything: football, basketball, soccer, baseball. I always wanted to be doing something. It narrowed down in high school starting with football, basketball and I even tried lacrosse and ended with football and soccer. Sports in my life have taught me a lot. I feel like my leadership skills have really grown because of sports since I’ve been in many leadership positions. It’s helped me in the classroom as well, and in life in general. I’ve also made many relationships with people because of sports. That’s the special thing about sports that I’ve always loved. Whatever sport it is, whatever team you are on, the relationship between you and your teammates is like a brotherhood.

Obviously, as years go by, you gain more responsibilities and you can’t continue to do all those sports. Do you ever regret not choosing basketball or baseball over mainly football and some soccer?

Obviously, you do look back on some things and wonder, “maybe I should’ve continued this sport,” but personally I don’t have any regrets. I chose my two favorite sports, and I know a lot of people say that I should have chosen basketball, because then I wouldn’t have had the injury. But I disagree. I wanted to play soccer and that’s what I did. It would’ve been fun to try out baseball in the spring or play lacrosse or maybe get a chance at basketball again, but I’m happy with what I chose and what I stuck with.