RE students make waves in the political sphere 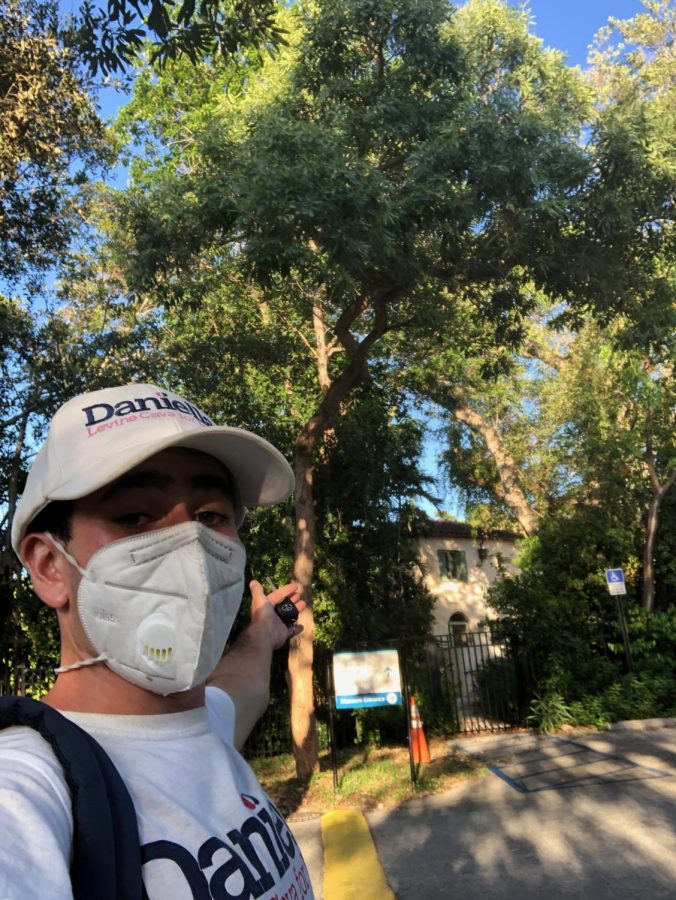 Alex Dray '21 poses after leaving one of the many houses he visited as part of his job canvassing for Danielle Levine Cava, a candidate in the Miami-Dade County mayoral race. Dawning a mask and his cap to show support for the campaign, Alex canvassed across Districts 5 and 7, which includes areas such as Brickell, Little Havana, and Miami Beach.

With November elections fast approaching, high school and college students across the nation have taken on innumerable roles on the political scene. As the coronavirus swept across the nation in March and altered the daily lives of all Americans, students such as Maya Rosen ‘21 and Alexandre “Alex” Dray ‘21 did not let the virus impede their ability to make a difference on the political scene.

The two seniors worked on the mayoral campaign of Daniella Levine Cava, a candidate in the race for Miami-Dade mayor. Working as canvassers for the Cava campaign, the two spent their summer knocking on the doors of citizens living in Districts 5 and 7 and have since been promoted to interns working at the campaign office.

While both have worked on political campaigns before, they agreed that there were profound differences, not just in the way canvassing worked due to coronavirus regulations, but also the “issues on voters’ minds,” said Dray ‘21. “The issues have really focused on relating to either race, or the coronavirus… over the past five, six months, the conversations within our political sphere have shifted so much and so have the issues that voters care about and talk about.” These issues have also drawn voters to invest time and interest in local and state elections primaries, which have historically taken a backseat to the national elections.

According to the New York Times, as of 2018, only 27% of eligible, registered voters participate in municipal elections. However, Rosen claims that this dynamic has been altered, citing the coronavirus as much of this reason. “People have now seen what can happen when you don’t have a local response. In Miami, when we had a surge of COVID cases and practically became the epicenter of the world, it was due to both a federal and local response, but local especially.” Now, Rosen claims, people are heading to the polls to ensure their vote goes to someone who could handle the pandemic.

But canvassing only solves part of the problem in the fight against low voter turnout rates, especially among young voters. Voter registration among people aged 18-24, according to the United States Census Bureau, has remained around 20% since 2010. Zara Shapiro ‘21, a senior who has been politically active through her work with the company PushBlack as well as campaigning for Representative Josh Gottheimer from New Jersey’s 5th District, has focused her work on engaging youth voters.

“Among youth voters, there is this kind of status quo held by many that your vote isn’t going to matter as much, or that voting isn’t seen as the “cool” thing to do,” said Shapiro. Normalizing voting as a “trendy” thing is “what I’m trying to do through my work… especially in the presidential election this year. If young voter turnout is high, change is likely to occur as a result,” she said.

As polarization continues to increase and gridlock stagnates Congress, many people — especially young people —have tried to separate politics from daily life, out of both a disinterest in politics itself and a fear of losing friends due to controversial opinions on political issues. But Shapiro believes the separation of life and politics is impossible, and this is something she learned while working on the Gottheimer campaign.

“[Politics] is intertwined within every single thing that we do, and for people to section off politics from everything else they do is just factually incorrect,” Shapiro said. “A part of your life, a part of your identity, will always be controlled by the government. People need to realize that politics has to do with anything and everything.”